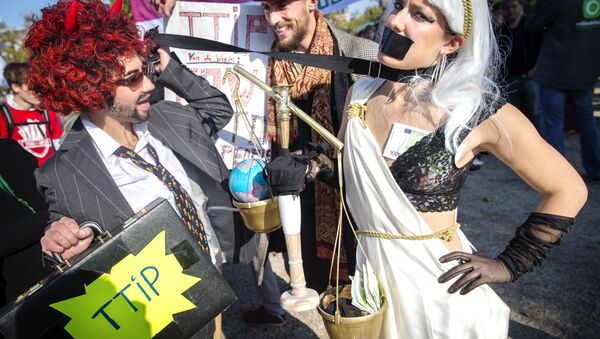 © AFP 2023
Subscribe
International
India
Africa
A new report says the proposed US-UK trade deal promised by Trump will be "TTIP on steroids," bringing in "corporate courts," privatization of health services and a threat to climate change, Sputnik has been told.

The US Speaker of the United States House of Representatives, Paul Ryan, April 19, told delegates at the think tank Policy Exchange in London, England that the United States and Great Britain play a critical role in promoting regional and global stability, creating new opportunities for trade and economic partnerships, and spoke of the "enduring importance of the special relationship between [the] two countries."

To all of Great Britain, thank you for your friendship & for working to ensure our special relationship grows stronger far into the future. pic.twitter.com/hxoP1ufWXP

​"We should measure the success of the special relationship not just by how we treat each other, but rather by how well we can leverage this moment to seize a real opportunity for our two nations," Paul Ryan said.

However, in a new briefing, campaign group Global Justice Now says a US-UK trade deal will only work for the US, following US President Donald Trump's "America First" policy.

The group says it would contain "more extreme forms of all the controversial elements of the deal that was being negotiated between the EU and the USA" — the Transatlantic Trade and Investment Partnership (TTIP).

"Being desperate to make a deal under any circumstances, while having a very weak bargaining hand, is the worst possible combination for the UK to be entering into any sort of trade discussions with the US, so it's not surprising that Trump is keen to make a deal when it could so massively benefit US corporations," Jean Blaylock, trade campaigner at Global Justice Now told Sputnik.

Trading with Trump — What we can expect from a UK-US trade deal.
Our new briefing out today https://t.co/hrASJVBcdB pic.twitter.com/7le8A30ENC

​The report said any US-UK trade deal would still create "corporate courts" that allow foreign corporations to sue governments outside of the national legal system to challenge such things as environmental protection or public health policy, lock in the privatization of public services, including of the National Health Service (NHS) and would undermine climate commitments.

"Tariffs between the US and the UK are already low and trade levels are high. So any deal would be about stripping away protections around labor rights, public services and consumer standards that are hugely beneficial to ordinary people, but occasionally inconvenient to business interests. There's an enormously powerful private health care sector of the US that is licking its lips at the prospect of being able to open up the NHS under such a trade deal," Blaylock told Sputnik.

At the heart of the TTIP deal is the controversial investor-state dispute settlement (ISDS) — the so-called "corporate courts" — protocol, under which companies that are barred from selling their goods and services in any state that is part of the agreement can sue the government for loss of earnings.

If a US food company that produces chicken meat by cleaning the plucked carcass in chlorinated water is prevented from selling it in the EU — where such practice is banned — the company can invoke the ISDS protocol, have the case heard by a special tribunal and sue for loss of earnings. The same is true of genetically modified foods, which are largely banned in the EU, but not in the US.

"Governments can never win from an ISDS case — even if the judgement is in their favor, they have legal costs which on average are just under US$6.4 million for each case," the Global Justice Now report says.