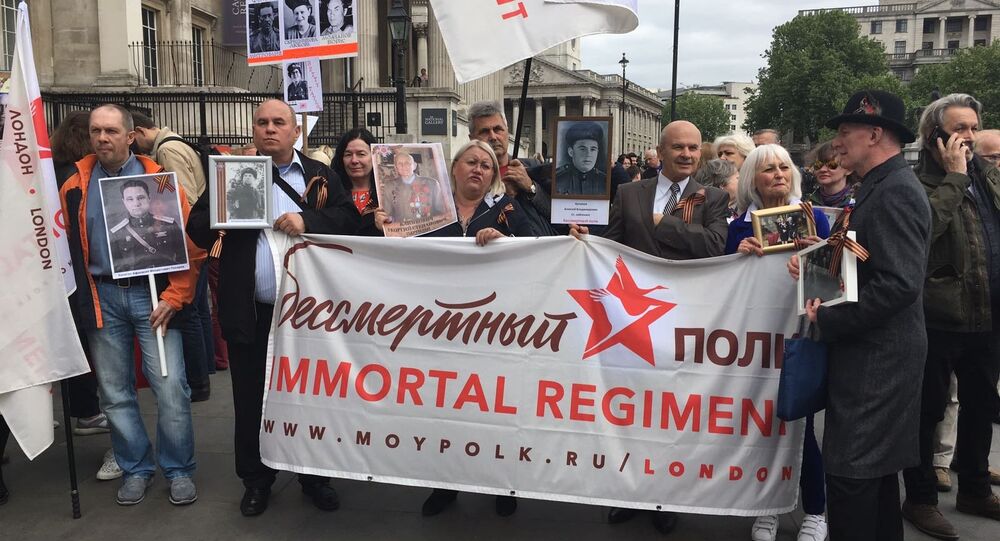 An "Immortal Regiment" has been marching through Central London to mark the 72nd anniversary of victory over Nazi Germany. The tradition that started in Russia in 2012, involves a procession of people carrying portraits of their relatives or friends who fought and died in the Second World War, also known as the Great Patriotic War in Russia.

Trafalgar Square came alive May 9, with patriotic Russian songs and victory banners. Thousands of people carried portraits of their next of kin, who courageously sacrificed their lives fighting to free the world of Nazism.

Victory in Europe over Nazi Germany — VE Day — is celebrated in the West on May 8, however the former Soviet Republics, as well as Russia, mark it one day later — on the day when the Soviet troops rushed to Prague to save the Czech capital from destruction by German forces that refused to capitulate.

The "Immortal Regiment" march every year in Russia, with hundreds of thousands coming together to pay tribute whilst gathered in Moscow's Red Square along with the Russian President Vladimir Putin. The total number of those who march across the country is estimated to be 12 million.

Russia and the former Soviet states aren't the the only ones to celebrate Victory Day. Marches to honor the war veterans from the "Immortal Regiment" took place in many cities across the whole world, including New York, Paris, Stockholm, Lisbon, Vienna, Lebanon, Buenos Aires and now, London.

London held its first march in 2016 with more than 2,000 people in attendance, and the organizers had an equally large turnout this year.

In fact, about hundreds showed up — Russians and non-Russians who now live all over the United Kingdom.

They shared their family stories with each other and London, who was fascinated by the size of the procession and its message — "Never Forget."

Over 1,000 Participate in ‘Immortal Regiment’ March in Prague – Organizer

Hundreds of People Participate in 'Immortal Regiment' March in Stockholm