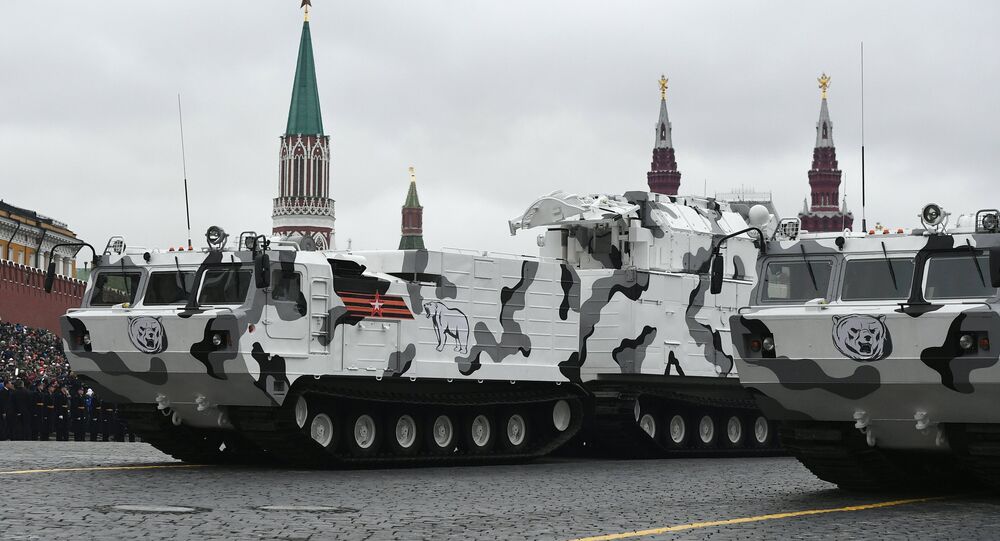 © Sputnik / Vladimir Astapkovich
2017 Victory Day Parade in Moscow (PHOTO, VIDEO)
MOSCOW (Sputnik) — The newly developed Tor-M2DT and Pantsir-SA, both designed to operate in the Arctic, could be spotted by their light gray color scheme in their first appearance to the wider public.

Both vehicles are mounted on Vityaz articulated tracked vehicles, which proved to be highly successful in getting the systems over Arctic-style hummocky ground during trials. The vehicles have also proven to be capable of climbing near-vertical slopes and crossing water obstacles without losing much speed.

© Sputnik / Mikhail Fomichev
Russian Pantsir Systems 'the Most Efficient Means' to Beat US-Made Tomahawks
The Tor-M2DT system was developed using the Tor-M2 missile launcher station specially for Russia's Arctic military group, and is able to defend airspace from enemy air attacks within a radius of at least 15 kilometers (9 miles). It has already been deployed on the Franz Josef Land archipelago on Russia's extreme northern latitudes.

The Pantsir-SA system was first commissioned with the Russian army in late 2016. It uses a Pantsir-S1 weapon station and is adapted to functioning at temperatures below —50 degrees Celsius. The station is equipped with a multi-channel system for capturing and tracking targets, quick-firing cannons and modern anti-aircraft missiles, which allows the weapon to assure the destruction of any air targets within a radius of 20 kilometers.

The Russian army's Land Forces Commander-in-Chief Col. Gen. Oleg Salyukov earlier said the new anti-aircraft systems were capable of fulfilling the tasks of ensuring Russia's security in the difficult climatic conditions of the Arctic, with complete absence of roads and remoteness from the bases.