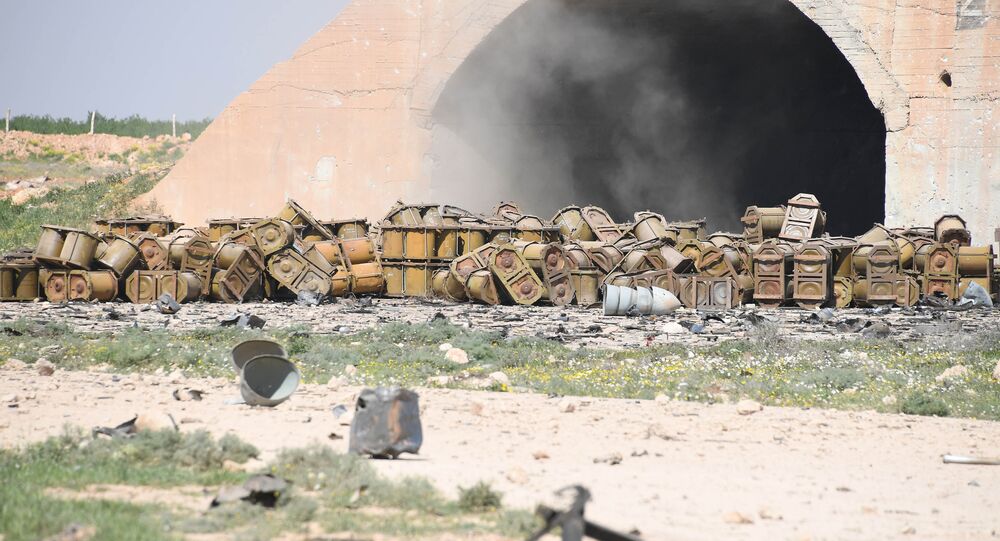 The UK-based advocacy group Stop the War has called on UK nationals to join in protest in London, Friday, to protest the UK government's support of the US missile strikes on a government airfield in Syria.

MOSCOW (Sputnik) — On Thursday night, the United States launched 59 Tomahawk cruise missiles at the Syrian military airfield in Ash Sha’irat, located about 40 kilometers (25 miles) from the city of Homs. US President Donald Trump said the attack was a response to the alleged chemical weapon use in Syria's Idlib on Tuesday, which Washington blames on the Syrian government. UK Defense Secretary Michael Fallon said that London fully supported the move.

The anti-war group stated in response to the UK support that, "As well as ​deepening​ the tragedy of the Syrian people, ​this utterly​​ irresponsible act ​threatens to widen the war and lead the West into military confrontation with Russia. ​​It is shameful that​ Theresa May​ has rushed to support this act by the most xenophobic and reactionary US president in history. ​​Stop the War calls for protests today against this or any further attacks​ and against British support or participation. The protest in London, organised by Stop the War… will take place today at​ Downing Street​ from 5 to 7pm."

According to Fallon, the US missile attack was a "limited" action to prevent future chemical attacks in Syria.

The Syrian opposition's High Negotiations Committee (HNC) spokesman Yahya Aridi told Sputnik that the HNC did not not expect further military actions from the United States in Syria.

Homs Governor Talal Barazi said earlier on Friday that the airbase had suffered insignificant damage after the overnight attack of US cruise missiles. According to Barazi, the attack left five servicemen and two civilians dead. According to the Russian Defense Ministry, two Syrian servicemen have gone missing and four have been killed.

A Sputnik correspondent reported from the scene of the attack earlier in the day that some hardware had been salvaged, including five Syrian fighter jets. Additionally, the runway seemed to have been spared along with a few hangars, but eight other hangars were taken out of service, he said.