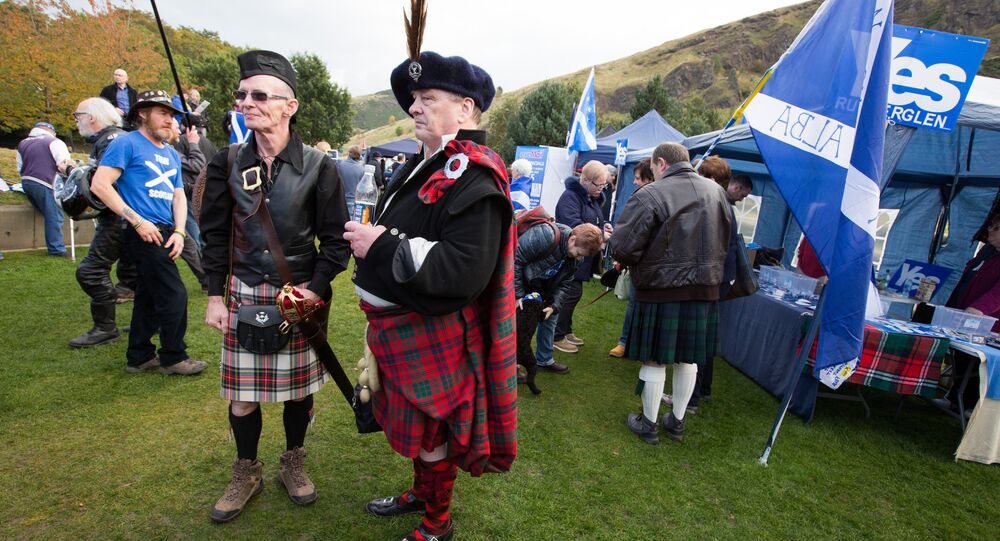 Scotland is using the threat of a second independence referendum in order to extract concessions from London during Brexit negotiations, Nikolai Kaveshnikov of the Moscow State Institute of International Relations told RIA Novosti.

The Scottish government is planning to use the possibility of an independence referendum as a bargaining chip with London during Brexit negotiations, Nikolai Kaveshnikov, Head of the Faculty of Integration Processes at the Moscow State Institute of International Relations told RIA Novosti.

"At the moment, the key issue for the Scottish National Party (SNP) is not so much independence itself, but the provision of favorable conditions for co-operation between Scotland and the EU after Brexit."

"That's why the referendum factor will be used by Edinburgh above all for trading with London about exactly how Scotland will participate in Brexit talks, exactly how the interests of Scotland will be taken into account," Kaveshnikov said.

"If it is possible to find a compromise between Edinburgh and London, I believe that the Scottish Parliament will either withdraw its referendum request or emphasize in every possible way that it was able to protect the interests of Scotland during the run-up to the referendum."

© REUTERS / Russell Cheyne
'It's Unclear Whether Brexit Can Persuade Scots to Leave the United Kingdom'
Last week the First Minister of Scotland Nicola Sturgeon wrote to UK Prime Minister Theresa May to make a formal request for a second Scottish independence referendum. The Scottish government plans to hold the referendum between autumn 2018 and spring 2019.

However, the EU and NATO have said that an independent Scotland would have to make a fresh application to both organizations.

In the past, the SNP has insisted that Scotland would automatically join the EU because it is already a member as part of the UK.

In 2012, then-European Commission President Jose Manuel Barroso said that an independent Scotland would have to make a fresh application under Article 49 of the Lisbon Treaty, a lengthy process.

"For European Union purposes, from a legal point of view, it is certainly a new state. If a country becomes independent it is a new state and has to negotiate with the EU," Barroso said.

© CC0
Scotland, Bavaria Sign Economic Declaration to Boost Ties Ahead of Brexit – Sturgeon
NATO Secretary-General Jens Stoltenberg also said that Scotland would have to re-apply to join the military alliance.

"If it happens, then the UK will continue as a member of NATO, but a new independent state has to apply for membership and then it’s up to the 28 allies to decide whether we will have a new member, because all decisions in NATO are taken by consensus," Stoltenberg told Sky News.

That does not appear to have dampened Scottish enthusiasm for leaving the UK. The Scottish Social Attitudes survey released by ScotCen last month found that 46 percent of Scots support independence, the highest figure since the survey began in 1999.

The survey also found that despite 62 percent of Scots voting to remain in the EU in the Brexit referendum, Scotland has become more skeptical about the EU. Two-thirds of respondents (67 percent) described themselves as Eurosceptic, up from 60 percent in 2015.