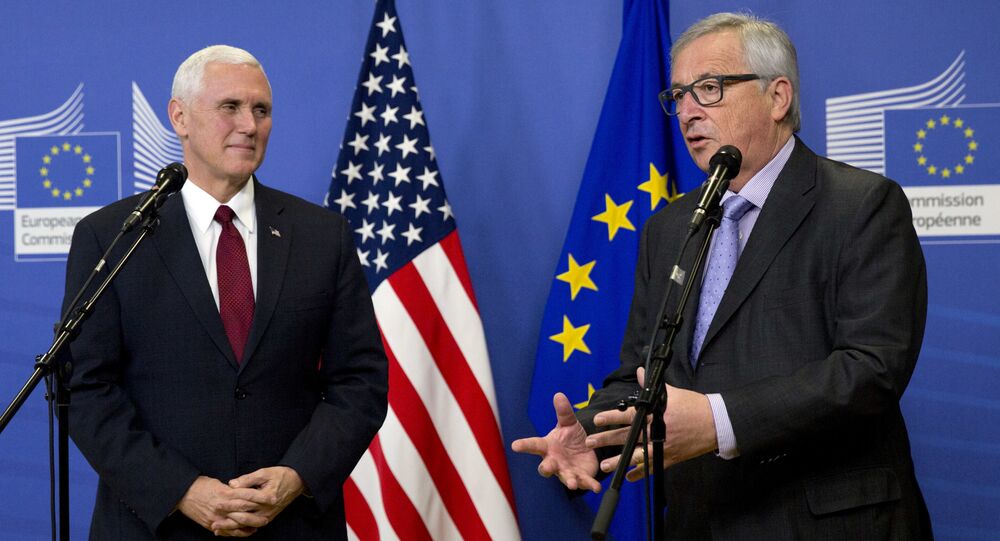 EU Commission President Jean-Claude Juncker is seeking to protect the bloc from threats to its existence by warning about the risks of undoing European integration, which according to the EU chief include the potential for war in the Balkans.

EU Commission President Jean-Claude Juncker has warned the Trump administration against supporting Brexit and the further break-up of the European Union.

Last week, Juncker told the German newspaper Bild am Sonntag that Donald Trump's praise of Brexit and encouragement for other countries to follow is "unprecedented" and a sign of "something like alienation" between the US and EU.

Juncker repeated his view in the Financial Times on Friday, adding that the US should be particularly careful about disparaging the EU because of the consequences its disintegration could have for the western Balkans.

Juncker said he had told Vice-President Mike Pence that support for the break-up of the EU could lead to conflict in Eastern Europe. He believes that the western Balkans have benefited from their struggle to obtain EU membership.

"I told him: 'Do not invite others to leave, because if the EU collapses, you will have another war in the western Balkans.' The only possibility for this tortured part of Europe is to have a European perspective. If we leave them to themselves — Bosnia and Herzegovina, Republika Srpska, Macedonia, Albania, all of these countries — we will have a war again," Juncker said.

© AP Photo / Boris Grdanoski
Brussels 'Defeated' in Macedonia After Anti-EU Protests Sweep the Country
Commenting on the statement, Dr. Andrew Blick, lecturer in Politics and Contemporary History at King's College London, told Radio Sputnik that the break-up of the EU would be unlikely to immediately lead to a war in Europe.

However, many EU member states have been at war with one another, at one time or another, before joining the bloc. From this point of view, a conclusion could be drawn that EU integration has prevented war in Europe.

"If you look at the period since what we now call the European Union, the European integration process, has been in existence, there has been an unprecedented period in which these kinds of wars have not taken place between member states – most notably, between France and Germany," Blick said.

"So, one could posit a theory that integration, the binding together of these different countries has been beneficial to stability and peace in the region and that to take it away again will cause instability and could contribute to an environment in which war is more likely."

"Certainly, the western Balkans is an area where there has been a tendency towards conflict, it's been a source of some very serious conflicts, triggered the First World War after all and one can expect that tensions may emerge in the future," Blick said.

© AFP 2020 / PATRIK STOLLARZ
'Not All Turks Are Little Erdogans': EU Commission Hits Back at Ankara
The Trump administration's euroskepticism marks "quite a big shift" from previous EU policy, which encouraged integration in the hope of creating a stronger European ally.

"We don't know how far the rhetoric of President Trump will manifest in reality and also, how clearly thought through all of his ideas (are) is also difficult to establish. So, we'll have to wait and see on that one." Blick said.

Juncker's announcements demonstrate Brussels' view that the bloc is facing various threats which encourage the chances of a break-up. These include the UK's decision to leave the EU, the Trump administration's unprecedented euroskepticism as well as potential conflict in the western Balkans.

"I think he (Juncker) would like to raise the issue that actually the stakes are pretty high here and from the point of view of the EU, it's important that the remaining 27 as far as possible, unify in the face of various threats," Blick said.

Each EU State Made Concessions to Agree on Rome Declaration