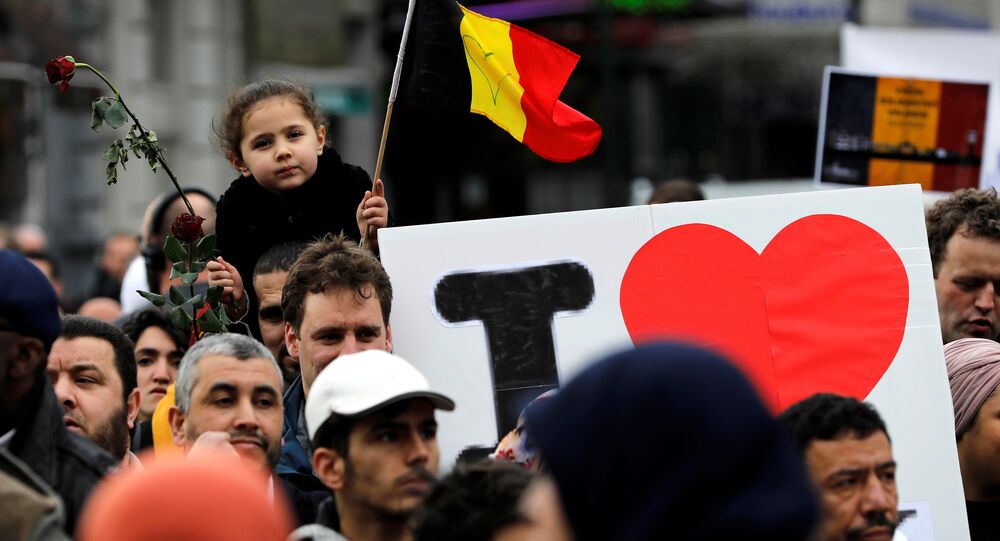 A Year On, How Has Belgium Dealt with the Terrorism Threat?

On the morning of March 22 2016, three coordinated suicide bomb attacks struck Belgium - two at Brussels Airport, one at Maalbeek metro station in central Brussels. In all, 32 died and over 300 were injured, making the terror assault by far the most bloodstained in Belgian history. One year on, how has the country faced up to its legacy?

While fingers of blame were pointed in a variety of directions — the government, the police, the security services, the public — in the wake of March 22, there was universal agreement that Belgium, and Belgians, must do more to cope with the hitherto largely unexamined challenges of terrorism and radicalization in the country.

In memory of the victims of the #Brusselsattacks. Europe will never forget 22/03/2016. pic.twitter.com/Ym2ajgneTI

Assessing Belgium's progress since that fateful day, Thomas Renard, senior research fellow at international relations think tank Egmont, says that much has been accomplished since March 22 2016 — around 26 counterterrorism measures have been or are in the process of being implemented.

"The legal counterterrorism framework has been broadened, while financial and human resources available to security services have been bolstered. Local prevention efforts have been strengthened. First-line prevention units were set up to monitor and respond to radicalisation. Multidisciplinary support centres were launched to help citizens confronted with radicalisation. Furthermore, coordination cells were established at the municipal level, gathering regularly all key local stakeholders — mayors, local police chiefs, prevention officers and social workers," he said in a statement.

While acknowledging these initiatives remain in their infancy, and are thus "probably" imperfect or incomplete, to Renard's mind these efforts nonetheless illustrate Belgium has been proactive in attempting to tackle the range of issues around terrorism and radicalization.

Nonetheless, many observers believe the country remains vulnerable. Of all the terror-related issues facing it, returning jihadist fighters perhaps looms largest. An International Center for Counterterrorism report indicates that while French, German and British citizens provide the highest numbers of foreign fighters in the ranks of terrorist organizations in Iraq and Syria, Belgium is the largest contributor in proportion to its population.

In August 2016, Belgian security services created a database of 614 jihadi fighters known to be or have been residing in Belgium, of which at least 266 were still fighting overseas.

It is unclear how many have returned since, or will return in future, but any that do raise serious questions for Belgium — namely, what risk do they pose, and what should be done with them?  It may be some returning fighters have no desire to carry out attacks in Belgium, it may that others represent dangerous elements, radicalized in jihadist ideology and equipped with a degree of terror training.

Renard says authorities have adopted a tailored approach, with a specific risk evaluation for each returning combatant. Some are automatically jailed, others subject to surveillance and restrictions. However, he is unconvinced this strategy is sustainable if and when the rate of returning jihadis increases. Local media reports suggest intelligence services are already under-resourced and overloaded.

Belgium is not the only country struggling with the issue of what to do with returning fighters — almost every Western European government is grappling with the same quandary. French presidential hopeful Emmanuel Macron has suggested such individuals could be jailed in specially built prisons.

© AFP 2021 / Het Nieuwsblad
Damage is seen inside the departure terminal following the March 22, 2016 bombing at Zaventem Airport, in these undated photos made available to Reuters by the Belgian newspaper Het Nieuwsblad, in Brussels, Belgium, March 29, 2016

Also in common with many other European states, Belgium remains undecided on which model of de-radicalization and disengagement to employ with these individuals. Renard says the country  remains "not very advanced" on this front, despite it being an issue demanding a "rapid" resolution.

Nonetheless, Renard is extremely positive about Belgium's efforts to tackle online Islamist indoctrination and recruitment efforts. The country has "distinguished itself" in the field, with its Ministry of Interior leading an EU-wide project on strategic communication against violent extremism, the European Strategic Communications Network.

Other sources are much less positive than Renard. A statement published by the European Strategic Intelligence and Security Center said authorities' powers had not been increased to a suitable degree.

"While it is now possible to conduct searches and raids at night in all matters related to terrorism, mandatory custody time has not been lengthened: it is still 24 hours, extendable to 48 hours in certain cases. A 24 hour mandatory custody in complex cases, where it is often necessary to hear several suspects (sometimes with translators), to confront them, to analyze documents (and sometimes to translate them), and to evaluate phone and computer data, is not sufficient. In France, in the same situation, a mandatory custody can last up to 96 hours (four days) and even be extended to six days if there is a "real risk" of terrorist acts," the statement said.

However, other organizations have suggested the powers of police and intelligence services have been extended "disproportionately" far in response to attacks such as the strike in Belgium.

In January, Amnesty International issued a report concluding European governments rushed through a raft of disproportionate and discriminatory laws that threaten individual privacy and liberty.

"Mass surveillance powers have been granted or otherwise expanded in the UK, France, Germany, Poland, Hungary, Austria, Belgium, and the Netherlands, among others, allowing the mass interception of and possible access to the data of millions of people. Governments are using counterterrorism measures to consolidate draconian powers, target groups in discriminatory ways and strip away human rights under the guise of defending them. We are in danger of creating societies in which liberty becomes the exception and fear the rule," he said.

© AP Photo / Matt Dunham
At Least Five People, Including Police Officer, Dead in Westminster Terrorist Attack (VIDEO)
Whether coincidental or not, as Europe and the world marked a year to the day since the attacks in Brussels, terrorism once again intruded violently into a major global capital — this time, London.

An attacker mowed down pedestrians in a saloon car, before charging through the gates of the Palace of Westminster and stabbing a police officer.

The assailant was shot by police as he approached a second officer. No official casualty figures have been released, but police are said to fear around a dozen have been seriously injured.