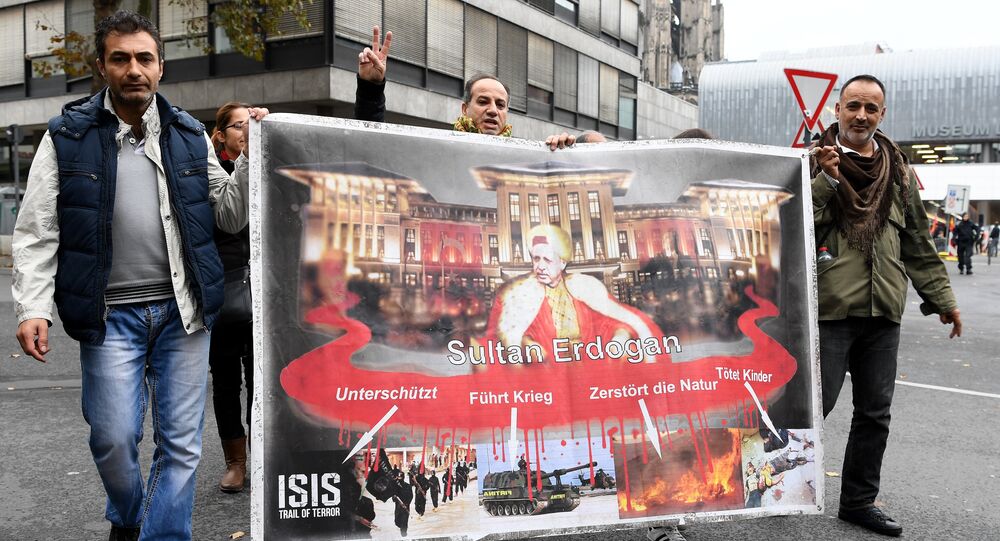 'Not All Turks Are Little Erdogans': EU Commission Hits Back at Ankara

EU Commission President Jean-Claude Juncker told the German newspaper Bild am Sonntag he is confident that Turkey won't ditch its migrant agreement with the EU, and suggested that the Turkish government is not representative of Turks living in Europe.

© AFP 2021 / CHRISTOF STACHE
Hot Air or Deadly Serious: Will Turkey Really Cancel the EU Refugee Deal?
In recent weeks Ankara has been in conflict with authorities in Germany, the Netherlands and Brussels regarding its referendum campaigning among the Turkish diaspora in Europe and the future of a deal to stop Middle Eastern migrants from coming to Europe.

However, the EU believes that the majority of its Turkish diaspora are not followers of Turkish President Erdogan, EU Commission President Jean-Claude Juncker said on Sunday, Germany's Finanz Nachrichten reported.

"Not all Turks are little Erdogans," Juncker told the German newspaper Bild am Sonntag.

"I absolutely don't have a problem with the millions Turks living in our part of Europe. They are well-integrated and contribute to prosperity."

In March 2016, Turkey and the EU agreed a deal on migration, according to which Turkey agreed to stop refugees and migrants from crossing the border into the EU, keeping them at refugee camps in Turkey in return for up to six billion euros in financial aid and visa-free travel in the EU for Turkish citizens.

Despite Turkey's threats to rip up the deal, Juncker said the EU is confident that Turkey won't ditch the migrant agreement.

"Turkey will not terminate this agreement, even if Erdogan has repeatedly threatened me with this," Juncker said.

© REUTERS / Fabrizio Bensch
Turkish Foreign Minister: 'Holy Wars Will Soon Begin in Europe'
"It is not in the interests of Turkey to put the issue in the hands of smugglers and bandits operating on the Turkish coast. Working with bandits is not in the ambitions of an EU candidate."

"The agreement is working. While some one million refugees arrived in Greece from Turkey in the eleven months before the agreement, in the 11 months after there were less than 27,000 – a decline of 97 percent."

"It does not make sense to take our anger out on negotiations which are not happening anyway."

However, Juncker said that Turkey's crackdown following the failed July 15 military coup could become a reason to suspend accession negotiations if Ankara follows through on threats to reintroduce the death penalty.

He also criticized President Erdogan's comparison of the German and Dutch authorities with Nazis, after they refused to allow Turkish ministers to hold political rallies in support of planned constitutional changes that would give President Erdogan greater executive powers.

© REUTERS / Umit Bektas
Turkish PM Says 'No Sign of Democracy' in Europe Amid Row With Netherlands
Turkey is holding a referendum on the issue on April 16 and Erdogan's Justice and Development Party (AKP) is keen to rally large constituencies of Turkish voters living in the EU – there are over 1.4 million eligible Turkish voters in Germany alone.

"It is absolutely unacceptable that the President of a country that is supposed to be on its way to Europe massively offends the victims of fascism. Erdogan's words are a trivialization of National Socialists and fascists of every color," Juncker said.

Juncker's optimism about the future of the migrant deal doesn't appear to be shared by Turkey. On Tuesday, Turkey's minister for EU affairs Omer Celik called its future into question, saying that the EU has not kept to its side of the agreement.

"It has emerged that the EU has not kept its word. I am saying this personally: Turkey does not have any obligation to the other side concerning the implementation of this deal. Hence it can reassess it when it wants and in the way it wants. I think the time has come to review it," Celik told Reuters.

While the EU Commission blames Turkey for the breakdown, some EU members are critical of Brussels' approach. On Thursday Hungarian Foreign Minister Peter Szijjarto accused the EU of deceiving Turkey.

"The European Commission told a lie to Turkey that the refugee issue and visa-free travel would be done simultaneously," Szijjarto said, Anadolu News reported.