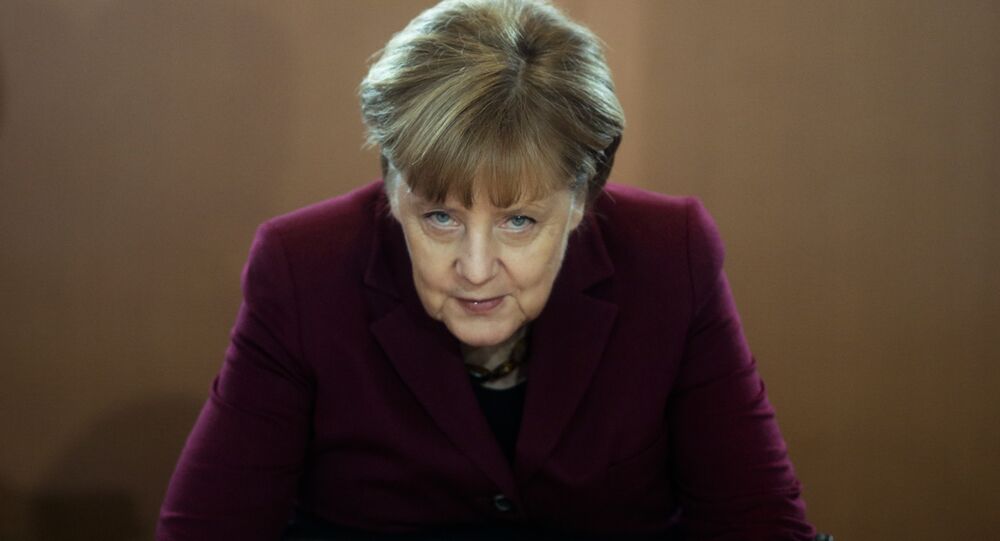 German Chancellor Angela Merkel has finally responded to Turkish President Recep Tayyip Erdogan's 'Nazi' jibes - but while she condemned the comments, she also called for calm, continuing the trend for German politicians to play down the provocations.

While presented by the mainstream media as level-headed sobriety, the lack of response may be attributable to simple realpolitik.

© REUTERS / Yasin Bulbul
'No Different From the Nazis': Erdogan Lashes Out at European Travel Bans

President Erdogan lashed out at German leaders March 5, in response to Cologne, Frechen and Gaggenau canceling planned rallies, intended to drum up support for Turkey's April 16 constitutional reform referendum, in which many Turks living abroad are eligible to vote.

The Netherlands and Austria quickly followed Germany's lead, with Austrian Chancellor Christian Kern calling for a pan-European ban on Turkish campaigning activities, and even suggesting long-running EU accession negotiations with Turkey should be abandoned permanently due to Erdogan's "trampling on basic democratic rights."

The response from Ankara was predictably incendiary, with Erdogan saying Germany's conduct was "no different from what the Nazis used to do."

"We don't want to see the practices of those fascist regimes. If I want to, I will come to Germany. If you don't let me in or if you don't let me speak, I will make the whole world rise up. We will humiliate Germany before the world," Erdogan said.

His tone was emulated by other members of the Turkish government government, with Justice Minister Bekir Bozdag accusing Germany of "purely fascist practices," and Culture Minister Nabi Avci saying some European countries had become dominated by "some Nazi remnant parties."

The Daily Sabbah, a pro-Erdogan newspaper, stated Germany was "best known for orchestrating the Holocaust," and was quashing investigations into arson attacks on mosques.

"German politicians, including members of the European Parliament, must be denied entry to Turkey, and German troops stationed at the Incirlik Air Base must be sent back home," the publication demanded.

However, German response to the jibes was subdued, with Foreign Minister Sigmar Gabriel one of the few figures to step forward and comment — although his tenor was entirely conciliatory, saying the tiff "should not wreck the foundations of the friendship between our countries."

Chancellor Merkel's response, transmitted via spokesperson Steffen Seibert, was almost as docile. While making clear there was "absolutely no justification" for the comments, and Nazi comparisons were "absurd and out of place" as they trivialize Nazi crimes, he also called for "cool heads to prevail."

"To our Turkish partners, let us talk openly and critically, but let us remember the special meaning of our close relationship," Seibert added.

The lukewarm, mollifying stance of German politicians may surprise, given understandable German sensitivity over contemporary Nazi comparisons — there was greater outrage exhibited by Germany's political class when the US Tennis Association played Nazi Germany's anthem instead of Germany's national anthem before first-round matches at the Federation Cup tournament in February.

However, given the fragility of the EU's migrant deal with Turkey, their reluctance to allow a diplomatic fracas to burst open is perhaps understandable.

© REUTERS / Umit Bektas
Merkel Sits Down With Erdogan to Talk EU-Turkey 'Press Release' Migrant Deal
Since March 2016, any migrant, asylum seeker or refugee arriving in Greece illegally is sent back to Turkey, where they must apply for asylum — and for every refugee Turkey resettles, the EU resettles a Syrian refugee. The failure of a similar strategy in Libya has left Turkey the only country successfully stemming the flow of migrants into Europe.

"From an average of 1,700 migrants arriving in Greece a year ago, the average stands today at 47 per day," he announced at a press briefing.

Avramopoulos also called for a strengthening of the strategy — a prospect that would likely be unrealistic if Merkel had gone for Erdogan's jugular.

There may be another ulterior motive behind Germany's lack of response. The country's Justice Minister, Heiko Maas, has criticized the ban on Turkish campaign activities in Germany, and suggested they be rescinded. Such moves, he said, would push Ankara "straight into the arms of [Russian President Vladmir] Putin," a prospect he said "no one wants."

By "no one" Maas may have merely meant the EU and NATO — for Ankara and Moscow alike evidently wish for a strong alliance.

Ilnur Cevik, a senior adviser to Erdogan, has called Russia a "very valuable and important ally" of Turkey, and noted cooperation between the two states is "very crucial for the future of peace in the Middle East."

Given Russian and Turkish collaboration has helped significantly reduce the amount of territory occupied by Daesh, and ensured an enduring ceasefire in Syria, it's likely the citizens of the Middle East not only "want" an alliance between Russia and Turkey, but actively welcome it.