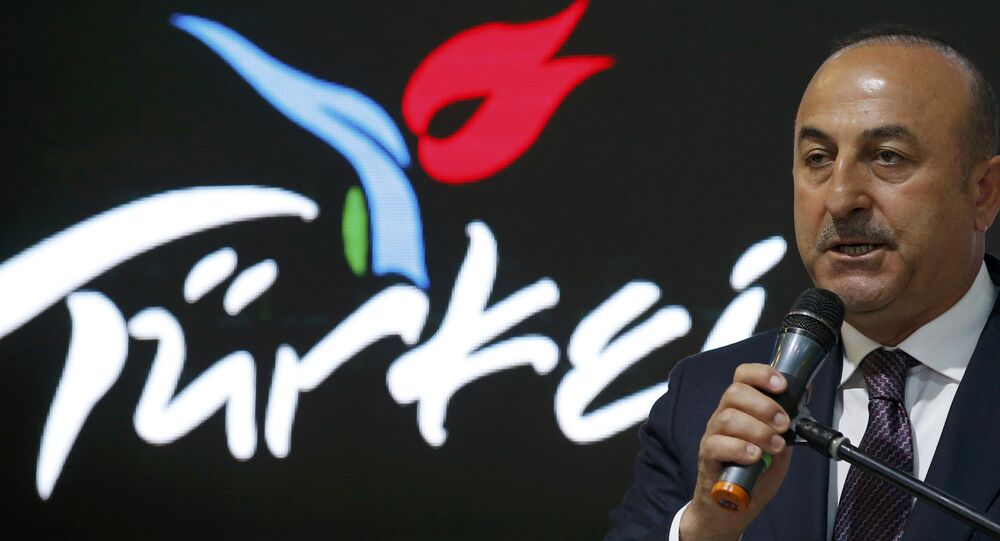 Turkish Foreign Minister Mevlut Cavusoglu has claimed that there is no difference in the Netherlands between liberal and fascist politicians. His comments come despite Dutch PM Mark Rutte seeing off a challenge from the overtly anti-Islam candidate Geert Wilders in the Dutch election.

In the latest denigration of relations between the Netherlands and Turkey, Turkey's chief diplomat Mr. Cavusoglu has made an astonishing prediction: that political co-operation between Turkey and Europe is so poor, a literal clash of civilizations is on the horizon.

© Sputnik / Fuad Safarov
"Now the election is over in the Netherlands… When you look at the many parties you see there is no difference between the social democrats and fascist Wilders. All have the same mentality. Where will you go? Where are you taking Europe? You have begun to collapse Europe. You are dragging Europe into the abyss. Holy wars will soon begin in Europe," Cavusoglu said.

His extraordinary forecast are the first official comments from Ankara on the Dutch election, which was seen as a barometer of populism in Europe.

However, clearly Mr. Rutte's success was not enough to placate the Turkish Foreign Minister.

Mr. Cavusoglu's comments have been dismissed by many in Europe has incendiary and fanciful. However, a breakdown of the Dutch election results reveals that anti-immigrant populism in the Netherlands is far from defeated.

It means that a Mr. Wilder's — a political leader who pledged to close all mosques and ban the Koran — still won enough support from Dutch citizens to achieve the second highest number of seats, with 20 MPs.

And even Mr. Rutte, who immediately proclaimed his win was a victory over the "wrong kind of populism," is no stranger to flirting with nationalist demagoguery.

The controversial message was widely seen as an attempt to appeal to voters considering voting for Geert Wilder's overtly anti-immigration Freedom party, which had been running high in the opinion polls.

However, Mr. Rutte insisted that his campaign wasn't against immigration, but for an increased focus on the integration of migrants into Dutch communities.

The Netherlands is home to 400,000 expat Turks, many of who want to attend Turkish referendum rallies run by the Turkish authorities but have been unable to, due to the Dutch authorities.

This clash has been replicated in other European countries, including Austria and Germany, who have also been reluctant to allow Turkish rallies to take place.

© REUTERS / Osman Orsal
People shout slogans during a protest in front of the Dutch Consulate in Istanbul, Turkey, March 12, 2017.

Turkish President Erdogan has reacted aggressively, dismissing European politicians across the continent as "Nazis" and "fascists."

On March 12, at a rally pressing for a yes vote in the upcoming Turkish referendum — which would significantly increase his own powers — Mr. Erdogan declared:

"I have said that I had thought that Nazism was over, but that I was wrong. Nazism is alive in the West."

For their part, senior European leaders have decried the Erdogan administration's use of language.

Former Prime Minister of Belgium, and senior EU negotiator, Guy Verhofstadt, dismissed Erdogan as "cynical," citing the Turkish government's attempts to crack down on dissent, in the aftermath of the failed 2016 Turkish coup attempt.

Cynical of Erdogan to call the Netherlands a fascist country, while building an authoritarian regime in Turkey.

Diplomatic ties have deteriorated so rapidly between Turkey and it's former European allies, that there are no signs of détente on the horizon. While a "holy war" being launched is unlikely, there are key geo-political issues that are now threatened as a result of the tit-for-tat debacle.

Turkey is a key player in the EU's attempts to mitigate Europe's migrant crisis. A year on from the EU-Turkey deal, which blocked the flow of asylum seekers into Europe, the Turkish authorities have threatened to withdraw from the agreement.

No specifics have been given, with President Erdogan only warning that the Netherlands specifically will "pay the price" for poor relations.