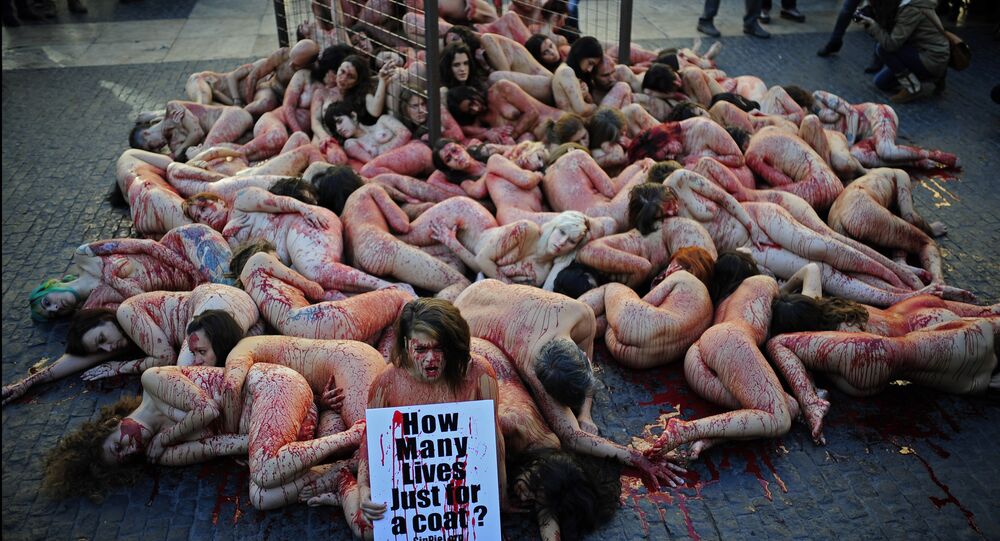 Topless activists doused themselves with fake blood in the streets of Valencia, Spain, Sunday, to protest the spilling of blood in the bullring.

The protest was timed to the start of the Fallas holiday in Valencia, a days-long festival in which Spain's bloody tradition of bullfighting plays a large role.

Coordinator of the animal rights group AnimaNaturalis Carmen Moll told Europa Press, "We are enjoying the Fallas at the moment, but at the same time bullfighting is taking place at the bullfighting fair. Activists bathe today in blood to represent the suffering of bulls right now in the square."

​Moll read a manifesto to start the protest, in which she explained that Fallas celebrations need not be soiled by the deaths of bulls in the ring, and that confronting a scared animal in a pen is not bravery.

"We want to fully enjoy the Fallas, but we will not be able to do so while [the celebration is] marred by the death of almost 100 bulls, calves and heifers," she said. She also pointed out the great expense of bullfighting, saying it cost taxpayers more than 500 million euros.

"We want to show the world how much suffering these walls contain, and therefore we put ourselves in the skin of the bull, the forgotten victims of this feast. His pain is our pain, and his blood stains our hands, messes up our Fallas and splatters all who are accomplices of this barbarism," she said.

The dozen or so protesters, clad only in black shorts and wearing fake bulls horns, stood in the middle of a blocked off a street. Holding buckets reading "Fallas is bathed in blood," they chanted for the abolition of bullfighting, then dumped the crimson liquid over their heads.

The Humane Society International estimates that 250,000 bulls are killed each year in the nine countries where bullfighting is commonly practiced. Other organizations estimate the number of bulls killed in Spain each year to be 24,000. The sport has been outlawed in some countries.

A day before this protest, AnimaNaturalis held a "funeral" in Valencia's town hall square for the 40 bulls that will be killed in the ring during this year's Fallas. Dressed in mourning, activists carried flowers and wore shirts with the names of the 40 animals who will be ritually slaughtered over eight days of celebration. This protest was joined by Councilor for Animal Welfare of the City of València Glòria Tello, who thanked the activists for raising awareness of the issue.