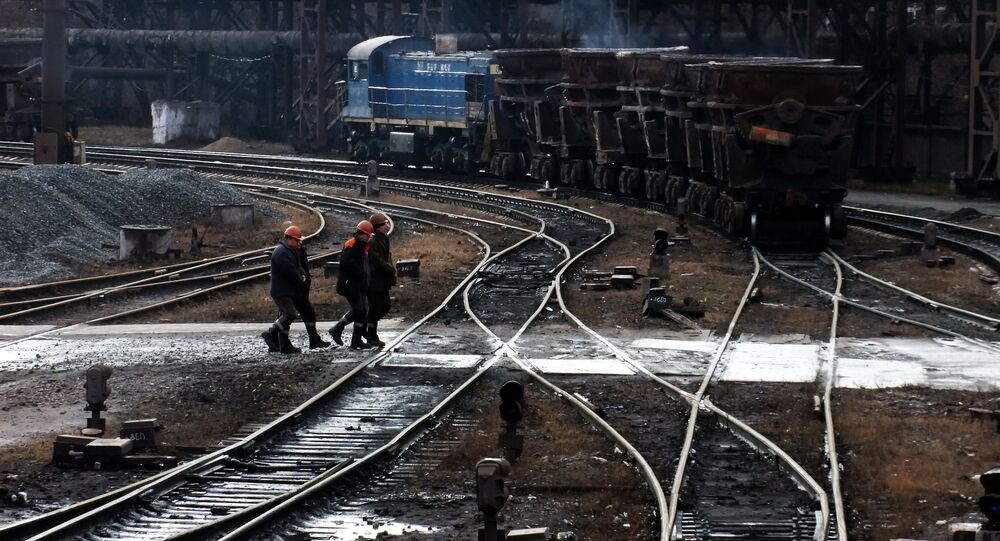 On Wednesday, in response to Kiev's ongoing transportation blockade of the Donbass, authorities in the Donetsk and Lugansk breakaways made good on a promise to nationalize several dozen Ukraine-administered enterprises. These enterprises will now reorient their production toward Russia and other markets, while Kiev loses another lever of influence.

On March 1, officials from the self-proclaimed Donetsk and Lugansk People's Republics nationalized major Ukrainian-administered enterprises operating in the breakaway territories. Republican authorities made the decision in response to the continued blockade of freight transport, started by Ukrainian nationalist activists on the border between Ukraine and the breakaways in January.

Earlier this week, the officials warned Kiev that they would officially halt all deliveries of coal to Ukraine, and put Ukrainian enterprises under their administration, if the blockade wasn't lifted by 12 am local time on March 1.

In their joint statement Wednesday, DPR leader Alexander Zakharchenko and LPR head Igor Plotnitsky confirmed that they would be following through with their warning. They also confirmed the halt in fuel deliveries to Ukraine, explaining that the republics had neither the physical capacity, nor a payment scheme, for the deliveries to continue.

© AFP 2020 / DIMITAR DILKOFF
DPR Nationalizes Some 40 Ukrainian Jurisdiction Enterprises
The nationalization includes the Donetsk-based Yenakiyevo Steel Plant, the Lugansk-based Krasnodonugol coal mine (the latter owned by Metinvest Group owner Rinat Akhmetov), and several dozen other industries, including about 40 in the DPR and an unspecified number in the LPR.

A special office has been established in each republic to manage the industries, and to ensure that the enterprises, deprived of their Ukrainian customers by the blockade, can continue to operate and pay salaries to their employees. The offices won't be charged with subsidizing enterprises, officials stressed, but will be charged with reorienting their production toward Russia and other markets.

The blockade's organizers – radical nationalist activists, so-called volunteer battalion fighters and veterans of the civil war in the Donbass, responded to the breakaway officials almost immediately, saying that they will not end the blockade but, on the contrary, "expand its geography."

© Sputnik / Sergey Averin
Russia Calls on Ukraine to Stop Donbass Blockade
Radicals, including some ultranationalist lawmakers, started their blockade of the Donbass in late January, blocking freight railroad links with territories under DPR and LPR control. The militants claimed that continuing trade with the self-proclaimed republics was illegal, since Kiev is at war with the breakaways.

The blockade has led to a disruption in anthracite coal supplies, vital for Ukraine's power plants, forcing Kiev to introduce emergency measures to save energy and prevent rolling blackouts. However, Kiev has resisted taking any firm action to lift the makeshift blockade. Observers believe the blockade has the support of influential politicians in Kiev, including Interior Minister Arsen Avakov. Others say the nationalist volunteer fighters' outsized influence in Ukrainian politics makes it dangerous for the government to challenge their activities, even if they are illegal.

Kiev called Monday's ultimatum an attempt to make the conflict in the Donbass permanent, and called the nationalizations a seizure of Ukrainian enterprises. Authorities have also said that the coal supplies produced in the breakaways belonged to Ukraine, and should not be subject to "blackmail."

© Sputnik / Igor Maslov
They Need to Survive: Kremlin Considers Business Nationalization in Donbass Understandable
Moscow, which acts as a guarantor to the Minsk Agreements, which are meant to resolve the conflict in eastern Ukraine, said that Ukrainian officials' 'seizure' terminology was not applicable. "In principle, we are witnessing the fact that the regions left behind by the [Ukrainian] government are falling into an even more difficult situation, being in complete blockade by extremist elements. So, of course, to some extent, one can understand actions taken by the leadership of those regions which…were rejected by their state. We are talking about the lives of several million people, so of course, people need to survive," presidential spokesman Dmitry Peskov said Wednesday.

DPR and LPR officials, for their part, also insisted that the blockade forced their hand, and that their primary task is to resume the work of enterprises and to save jobs. The blockade has already forced several major enterprises to halt their operations altogether, with company officials citing the inability to import raw materials or to export finished products, or even to pay taxes into the Ukrainian budget.

DPR head Zakharchenko calculated that it will take about two months for the enterprises to restart work, and to reorient to other markets. "The main goal is to ensure the smooth operation of enterprises, the payment of wages and the provision of jobs for the workers at these enterprises," he stressed.

© Photo : YouTube/Golos UA
Dissociative Disorder: How Ukraine Shot Itself in the Foot With Its Own Blockade of Donbass
Republican trade officials have also stressed that they have no doubts about these enterprises' ability to successfully reorient toward Russia and other markets. Furthermore, they believe that the nationalizations will only expand foreign trade, given the current moribund status of the Ukrainian economy.

DPR Acting Minister of Industry and Trade Alexei Granovsky told reporters that while a great deal of work remains to be done to complete the overhaul, "we already have an established mechanism of interaction to address such issues."

Granovsky also pointed out that "despite the difficulties associated with political recognition, our enterprises have been quite successful in their cooperation with other countries…In fact, our manufacturers had begun the process of withdrawal from Ukrainian markets in favor of other countries over two years ago. Both the government and the business community has some experience in this."

Kiev launched a military operation against the self-proclaimed Donbass breakaways in April 2014; locals began the fight for autonomy and independence after a coup rocked Kiev in February 2014. According to the most recent UN figures, over 10,000 people have been killed in the civil war, with thousands more injured and millions internally or externally displaced. In late 2014, the Ukrainian government cut off pensions, as well as funding for hospitals, nursing homes, schools, prisons and orphanages, to separatist-controlled areas. Russia has sent dozens of aid convoys, both state-funded and independently organized, to help deal with the difficult humanitarian situation in the region.