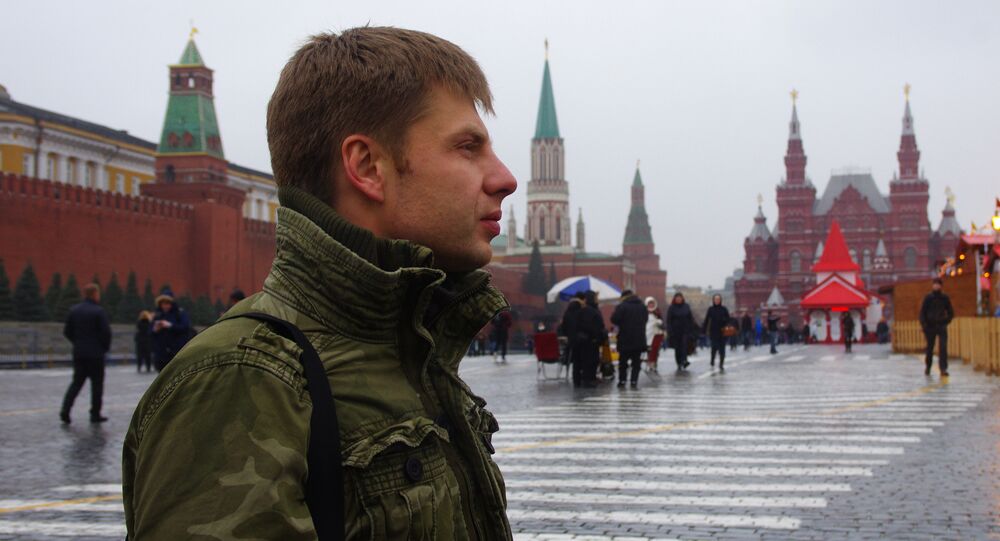 Boy Who Cried Wolf: How a Ukrainian MP 'Kidnapped' Himself for Some Cheap PR

Last week, Ukraine's pro-government media temporarily lost its mind after it was reported that Oleksiy Honcharenko, a rising political star from the pro-presidential Poroshenko Bloc parliamentary faction, had been abducted. As it turned out, the lawmaker's 'kidnapping' was a staged show organized by Ukraine's Security Service.

On February 23, prosecutors from southwestern Ukraine's Odessa Region told Ukrainian media that Honcharenko had been kidnapped by unidentified attackers in the city of Odessa. Journalists immediately began spinning the story, suggesting that there may have been a 'Russian trace' to the kidnapping.

The media's logic was simple. In his home region of Odessa, across eastern Ukraine and in Russia, Honcharenko is seen as an odious figure. He is thought to be one of the organizers of the events of May 2, 2014, when far-right radicals in the city of Odessa trapped anti-Maidan protesters inside the House of Trade Unions building and set it alight, burning over 40 people alive and leaving hundreds injured. Speaking to Ukrainian television on the night of the massacre, Honcharenko famously bragged that "we've cleared Kulikovo field of a separatist camp."

Odessa media agency
The House of Trade Unions building in Odessa on May 2, 2014
© Sputnik / Alexander Polishchuk
May 2 in Odessa: The Massacre Which Sparked Wider Civil War in East Ukraine
The killings, which have become known as the Odessa Massacre, have yet to receive a proper investigation, in no small part due to Honcharenko himself, who has actively worked in parliament to pardon those involved in the clashes.

Last summer, the Office of the UN High Commissioner for Human Rights complained that Kiev was deliberately refusing to properly investigate the Odessa events. Almost three years on, despite an abundance of video evidence and hundreds of witnesses, including photos by Honcharenko posing with the burnt bodies of anti-Maidan activists, the crimes have yet to be prosecuted.

Given this history, Ukraine's pro-government media figured that it was only logical to primitively accuse Russia of involvement in Honcharenko's abduction.

However a few hours after his 'kidnapping', Honcharenko appeared, free and unharmed, giving interviews for Ukrainian media, and explaining that it had all been a ruse.

The Ukrainian Security Service soon issued their own report, saying that the reports of the kidnapping were put out in order to arrest several members of "separatist, terrorist groups operating in Odessa" which allegedly planned to abduct and torture the lawmaker. A spokesman for the Odessa Region branch of Ukraine's Security Service said that the kidnappers had planned to torture Honcharenko, blind him, smash his kneecaps and douse him with acid.

However, Kushnarev is also a member of the Opposition Bloc, the political party now serving as the main opposition to the pro-government coalition, leading to speculation that the arrest could have been politically motivated, as a blunt operation to remove a political rival. If confirmed, the kidnapping and torture story may thus turn out to be a complete fabrication.

Honcharenko has made a name for himself as a provocateur. In November 2015, after a Turkish Air Force jet shot down a Russian Su-24 bomber operating over Syria, resulting in the death of its pilot and a Russian Marine who had been sent to rescue the pilots, Honcharenko staged a makeshift ceremony in front of the Turkish Embassy in Kiev to honor the Turkish pilot.

Before that, following the murder of former Russian opposition politician Boris Nemtsov, Honcharenko traveled to Moscow for a commemorative march, where he was temporarily detained by Russian police for questioning regarding his alleged crimes against a Russian citizen in the Odessa events. During his detention, which lasted one day, the politician claimed to have been beaten and deprived of medical and legal help. After being released, Honcharenko returned to Ukraine, where he vowed to sue Russian police.

© Sputnik / Nicolay Lazarenko
From Asset to Liability: Kiev Blowing a Gasket Over Washington's Change in Priorities
Earlier this month, Honcharenko vandalized the Berlin Wall monument outside the German Embassy in Kiev, spraying the word 'Nein' ('No') on the concrete slab wall section in response to German Ambassador to Ukraine Ernst Reichal's remarks that elections in the Donbass would be necessary before Ukraine could regain its control over the breakaway territories.

The vandalism sparked a minor diplomatic row, with Honcharenko accused of violating the inviolability of the German diplomatic mission to Kiev. Rather than deny it, the politician, who enjoys immunity from prosecution, published photos of himself posing next to the vandalized monument on his Facebook page.

Ultimately, in light of his history of provocative and alleged criminal behavior, observers say that it would be extremely naïve to rule out that Honcharenko may have 'kidnapped' himself for some cheap PR.