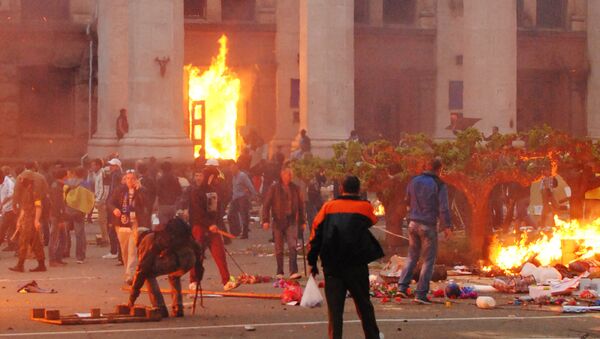 Exactly two years ago, pro-Kiev nationalist activists blocked anti-Maidan protesters inside Odessa's House of Trade Unions building and set it on fire, killing nearly 50, and injuring hundreds more. The event, which has yet to receive a proper investigation, marked the point of no return in the escalation of the civil war in eastern Ukraine.

On Monday, Odessa is on lockdown. Regional governor Mikheil Saakashvili deployed nearly 3,000 police officers and National Guard members in the city, ostensibly in order to 'maintain order' in the city on the 2nd anniversary of the massacre of anti-Maidan activists. The deployed National Guard units include 300 members of the notorious neo-fascist Azov Regiment, which has been accused of war crimes in eastern Ukraine.

Odessa Remembers: Residents Mourn the Victims of 2014 Massacre
The situation is tense. The local police press service released a statement Monday morning saying that they had found an explosive device in the city's center, and detained the person who allegedly planted it. The 'explosive device' appears to have turned out to be a smoke bomb.

At the same time, Russian news agency RIA Novosti has reported that people arriving at the site of the tragedy at Kulikovo Field to lay flowers to the dead have been hampered by police, who cordoned off the area and haven't allowed mourners to get through.

City and regional authorities have a lot to be nervous about. Two years after the tragedy, a proper investigation into the events still hasn't concluded, and charges still haven't been laid against thugs who burned dozens of protesters alive, despite abundant video and photo evidence, most of it now publically available online.

Looking back, many observers consider the events of May 2, 2014 to have been a turning point in Ukraine's civil war, a date after which eastern Ukrainians opposed to the February 2014 Maidan coup could no longer see themselves ever reconciling with a government in Kiev that was openly allied with the ultranationalist criminals that caused the massacre. These forces, hailing to Ukrainian Nazi collaborator Stephan Bandera, reminded them of the fascist brutalization of their country during the Second World War 70 years earlier.

Russian sociologist Boris Kagarlitsky predicted as much mere days after the tragedy, writing that "it is obvious to everyone that the catastrophe in Odessa has become a turning point in the history of the civil war that began when Ukraine government forces attacked Slavyansk and other cities that had raised the flag of the Donetsk republic."

"Inevitably," Kagarlitsky added, "the ferocity on both sides will now increase; escalating violence and the splitting of the country are unavoidable. But it is not only in Ukraine that the events of May 2 have represented a watershed for public opinion. This applies no less to Russia as well."

A Grim Anniversary Between Two Holidays: Remembering the Odessa Massacre
Indeed, both at the state level and among ordinary Russians, the Odessa tragedy was etched into peoples' minds as a demonstration of the utter madness unfolding in post-Maidan Ukraine. If before, people criticized the new government in Kiev primarily for its 'anti-Russian' and 'pro-Western' pivot, after Odessa, criticism also shifted onto the post-coup government's open ties with ultranationalist and openly-fascist groups of fighters. With the Soviet Union suffering over 20 million deaths at the hands of the Nazis, the idea that their Ukrainian brothers could tolerate or even cozy up to the followers of known war criminals truly was a sign of madness for Russians.

For their part, Russian authorities have continued to push for real and open investigation into the tragedy, which Kiev has stalled for over two years. Last week, Russia circulated a draft statement in the UN Security Council reiterating the need for an investigation to occur. The US and the UK ended up blocking the initiative, something Russia's permanent UN representative Vitaly Churkin called "shameless."

For his part, former Ukrainian Prime Minister Mykola Azarov, who was ousted from his post together with President Viktor Yanukovych during the events of Maidan, took time out on the anniversary of the massacre to criticize not only Kiev, but the Western governments that continue to back it.

"It is clear," Azarov wrote, "that the Kiev regime is doing its utmost to conceal from the Ukrainian people and the international community the truth about this tragedy of a global scale. What is unclear is why the US government, Germany, France, the UK and other countries that call themselves civilized and democratic remain silent about this crime."

At the same time, the former prime minister emphasized that he has not lost hope that the perpetrators of the violence will be punished, and that Odessa will one day be liberated from its present 'occupation'. "Odessa, which is Ukraine's most freedom-loving city, has been under occupation for two years. This is a black period in the city's history, but it will surely come to an end."

Ukraine’s Breakaway Region Lugansk Marks Two Years Since Odessa Massacre
Echoing Azarov's sentiment, international human rights activists too have not forgotten, and have not given up hope that the truth about the massacre will come out some day. A delegation of American human rights activists from the United National Antiwar Coalition (UNAC) vowed that they would be present in Odessa on Monday, in order to prevent attacks against mourners.

Joe Lombardo, one of the delegation's organizers, told RIA Novosti Sunday that the activists would make the trip to the Ukrainian city in spite of the planned presence of neo-fascist thugs from the Azov Regiment. "We know that the Azov Battalion [sic] has been sent to Odessa. Together with our friends from Odessa and representatives from other countries, we will do everything we can to keep everyone safe," the activist noted.

Last week, speaking to Sputnik, Lombardo explained that one activist from their delegation would go to Brussels on Tuesday "to speak to the European Parliament about conducting an investigation into the events of May 2, 2014."

American peace activists aren't alone. On Monday, EU Ambassador to Ukraine Jan Tombinski urged the Ukrainian government "to follow up on the recommendations of the Council of Europe International Advisory Panel and carry out an independent and transparent investigation."

Ultimately, doubts remain whether Ukrainian authorities will ever allow for an open inquiry into the events of May 2, 2014. The issue for Kiev, and for their political patrons in Brussels and Washington, seems to be that the 'defense battalion' radicals that put down anti-Maidan protests in Odessa with such extreme violence are the same forces that helped to put the post-coup government into office. If Kiev convicts members of the armed and radicalized nationalist forces that support them, the current government may not be long for this world.