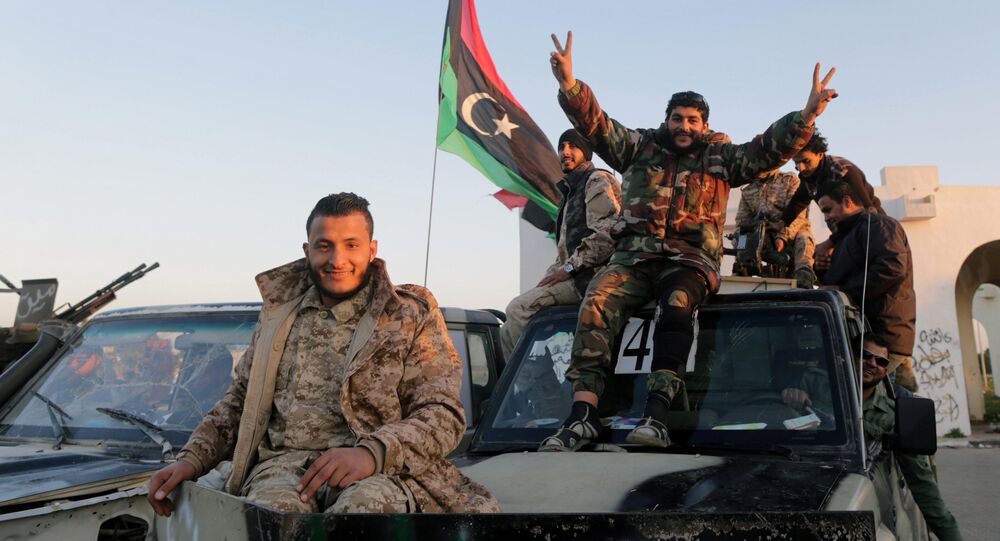 Following a NATO-led intervention and forced "democratization," Libya has become one of Europe's worst nightmares, degenerating into a hotbed of terrorism and a source of mass migration. However, Russia may utilize the West's failures to strengthen its position in the Mediterranean, while also promoting a solution for the war-ravaged country.

© AP Photo / Manu Brabo
'No One Else Can Do That': Italy Seeks Russia's Help in Resolving Libyan Crisis
Six years after the fall of Muammar Gaddafi, Russia is steering towards a new foreign policy triumph over the West, Danish columnist Jacob Svendsen wrote in the newspaper Politiken.

Of late, Russia has strengthened its cooperation with Libyan marshal Khalifa Haftar, a powerful warlord who controls not only the eastern part of the war-torn country, but also most of its vast oil deposits. According to Svendsen, Khalifa Haftar may become part of a sustainable political solution in Libya, and Russia may establish a stronghold in the Mediterranean.

In recent weeks, the 73-year-old North African marshal's favor has become the goal of a fast-paced diplomatic race, Svendsven wrote. The EU's goal is to get Haftar, who has admittedly accumulated great powers, to come to terms with the weak UN-backed provisional government in Tripoli (GNA), which currently only controls a minor part of the country. Unlike Haftar, who speaks from a position of power, the rickety GNA is entirely dependent on a complex web of militias in western Libya for support.

"All the countries involved have recognized that Haftar must somehow be integrated in the power in Libya. Haftar, however, believes himself to stand a fair chance and sees no point in power-sharing," Mattia Toaldo, an expert on Libya from the European Council on Foreign Affairs, told Politiken. "There are fears that he will become a new strongman, which are based on his repeated statements that Libya's military must be independent of the political leadership. At the same time, he is quite popular among many Libyans who hope that his army succeeds in stopping the warring militias and the chaos they have created," he added.

According to Mattia Toaldo, Russia is adhering to a comprehensive geopolitical strategy of gaining influence in the Middle East and North Africa.

"Russia is moving into the position of a mediator in Libya and is showing that it is able to do what the West had failed to do since Gaddafi's fall," Mattia Toaldo said.

According to associate professor Peter Seeberg of the Southern Danish University, it is yet unclear whether the EU may succeed in making Haftar, who has gained control over most of Libya's oil and gas fields and terminals, find a middle ground with the feeble central government.

"The question is whether he intends to, so, become part of a political solution or he'd rather become a sole leader, in the style of Gaddafi," Peter Seeberg ventured.

© REUTERS / Ismail Zitouny
Daesh Defeat in Sirte Marks New Chapter for Libya
Another condition to be considered is the role of the US in Libya under President Trump, whose people have had their contacts with Haftar and would not be thrilled with his increased cooperation with Russia.

For EU's part, though, the main objectives are stopping the growing current of refugees who are crossing via the Mediterranean Sea, which last year alone claimed over 4,000 lives, and lowering the risk of terrorist attacks from Libya. In both cases, Haftar may prove irreplaceable.

Since the lynching of Muammar Gaddafi, Libya has become a failed state. Only a myriad of armed groups wield power. Libya is awash with arms and has reportedly become a safe haven for terrorists, including Daesh (ISIS/ISIL).