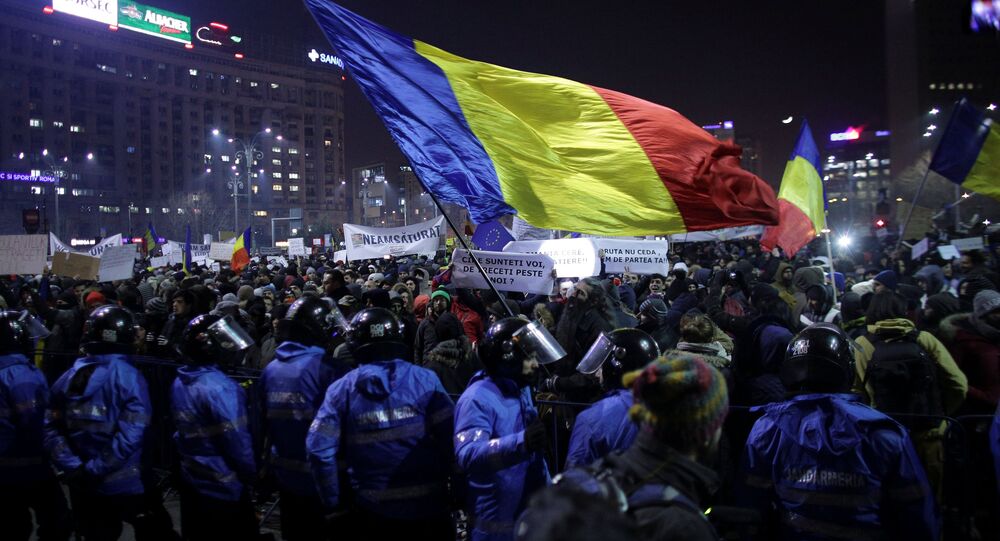 Following an emergency meeting on Sunday, the Romanian government repealed a controversial decree that was expected to decriminalize small-scale government corruption in the country. The government made the decision after days of mass protests in the streets of Bucharest and other Romanian cities - the largest since the fall of communism in 1989.

Last week, the Romanian government adopted a controversial emergency law decriminalizing abuse of power and corruption offenses by public officials. The decree, which was set to take effect beginning February 10, decriminalized cases of official misconduct in which the damages amounted to less than 200,000 lei (about $47,680 US), and provided for pardons for those convicted to less than five years in prison.  The measure also offered reduced sentences for persons over sixty years old, pregnant women and parents of small children. The decree would have resulted in the release of over 2,500 convicted felons.

The country's new government, elected in December, explained that the law was necessary to help align the criminal code with rulings by the Constitutional Court. However, news of the decree soon spread, leading to mass demonstrations across Romania. On Wednesday, 150,000 protesters were estimated to have gathered in the capital of Bucharest, with at least as many protesters springing up in other cities, according to local media. On Friday and Saturday the protests reached their peak, with 330,000 people gathering across the country.

President Klaus Iohannis vowed to challenge the decree in the Constitutional Court, and Business Environment Minister Florin Jianu said that he intended to resign from his post over the law. Somewhat bizarrely, Senate President Calin Popescu-Tariceanu claimed that "occult forces," including from Russia and the EU, were interested in destabilizing Romania through the protests.

© Sputnik / Tudor Vintiloiu
Bucharest to Reverse Controversial Criminal Law Changes Amid Massive Protests
One official who was expected to benefit directly from the new law was Liviu Dragnea, the leader of the Social Democratic Party and President of the Chamber of Deputies, Romania's lower house of parliament. Dragnea was caught defrauding the state the equivalent of about $25,880, and the decree would have freed him from criminal charges.

Amid the unrest, Bucharest police used tear gas against protesters, who threw firecrackers and smoke bombs at officers. Three policemen and two protesters were reported to have been injured in clashes.

© Photo : YouTube/Eduard Florin
Thousands of people protesting against the government in front of the Victoria Palace in Romania’s capital Bucharest, February 2, 2017.
© AP Photo / Vadim Ghirda
Moldovan Supreme Court Returns Ex-Romania President's Lawsuit Against Moldova Head - Court
Protests continued and expanded for five days into Saturday before the government caved to their demands, even though they vowed not to do so at first.

On Saturday evening, Prime Minister Sorin Grindeanu told local media that "Romania seems broken in two" and that the government "will have an emergency meeting to revoke this ordinance." The politician added that Justice Minister Florin Iordache would take responsibility for the confusion surrounding the measure, an Sunday, local media reported that Iordache would resign from his post.

Protesters voiced satisfaction over the government's promise, but vowed to stay in the streets until the law was actually repealed. Others have suggested that the entire government should resign.

On Sunday, Romanian television network Digi24 reported that the government had moved forward and repealed the law.

Speaking to Sputnik last week, Romanian politics expert Dr. Liana Pop explained that the Social Democratic Party and the Alliance of Liberals and Democrats appeared to have gravely misjudged public sentiment when they passed the measure. "The Social Democrats received electoral support in the elections in December on a promise to make the state more responsive to the needs of the impoverished and to increase investment in public services. It was not an endorsement of corrupt behavior among them," Pop said.

© AFP 2021 / Valentina Petrova
Corruption Runs Rampant in Bulgaria and Romania After 10 Years of EU Membership
Romania's major opposition parties, including Save Romania Union and the National Liberal Party, promised to file a no-confidence motion against the government on Wednesday. It's now unclear whether they will move forward with the measure.

In any case, Pop said that she hoped that the demonstrations would result in "vigorous internal debate within the [Social Democratic Party] to force out corrupt politicians who cannot carry out their job responsibilities due to legal problems."

For her part, Iulia Cospanaru, the adjunct director of Transparency International's Romania branch, told Sputnik that the government decree, and the protests that followed, were "the result of the lack of a public debate" on important issues in Romanian politics. "The way the government passed these decree – late at night, after a quick consultation, during a meeting dedicated to the state budget, violated the customary standards of good governance, transparency and predictability of the decision-making process," she said.

"This should be a reminder that any hasty decision-making mechanism can generate unwanted effects," Cospanaru added.

This week's protests, the largest since those that sparked the ouster of longtime communist leader Nicolae Ceausescu in December 1989, have seen direct comparisons between the two events.

Probably the largest protest in #Romania after 1989. Back then for #Democracy, now for the #RuleOfLaw pic.twitter.com/rWFGasQBNf

Fortunately, this week's protests have been much more peaceful than those in 1989, which saw over 1,100 people killed, and thousands injured, and included the execution of Ceausescu and his wife by firing squad.

Unrest in Romania: 300,000 People Take to Streets on Fourth Day of Protests