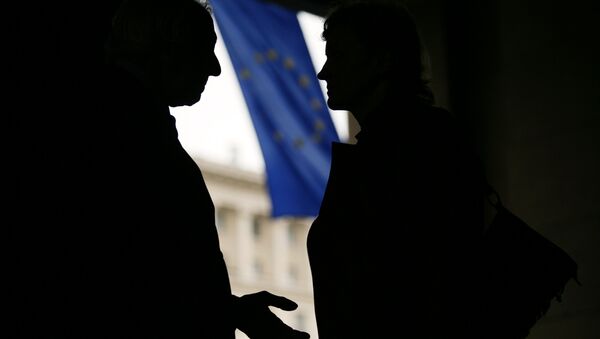 © AFP 2021 / Valentina Petrova
Subscribe
Romania and Bulgaria's battles against corruption have come under attack from the European Union, with their efforts being branded "fragmented and largely ineffective."

Bulgaria and Romania ascended to EU membership in 2007. The European Cooperation and Verification Mechanism was established concurrently, to monitor the countries' efforts at tackling endemic issues around corruption, cronyism and organized crime. Its annual reports assess judicial independence and efficiency, integrity and the corruption fighting measures. Bulgaria's report has an additional mandate to assess the country's fight against organized crime.

While the monitors' 10-year progress report is less than positive, Bulgaria was the target of the bulk of the organization's opprobrium. Its country-specific report, said Bulgaria's overall institutional structures for fighting corruption "remain fragmented and largely ineffective," and generalised problems of corruption in the public administration remaining rife. In particular, efforts to fight organized crime were sharply criticized, as repeated reorganizations of the country's prosecuting agency have meant organized crime bosses are consistently escaping justice.

Furthermore, procedural structures for prosecuting complex cases of corruption are lacking in Bulgaria, while the country's criminal code is seen as a "source of problems in the prosecution of serious crimes." The country's prosecutorial network is insufficiently independent from government, and regarded by the CVM as "over-powerful."

Cooperation and Verification Mechanism in Bulgaria 🇧🇬 and Romania 🇷🇴 — What are the benchmarks? Factsheet: https://t.co/LzIfEuOSxB #CVM pic.twitter.com/HtmuGpqGAZ

The CVM's assessment of Romania was more positive. It judged Romania's National Anti-Corruption Directorate to be effective at indicting politicians of all ranks and parties and bringing them to trial, and the National Agency for the Management of Seized Assets was also adept at confiscating criminal assets.

Romania's National Integrity Agency was also praised for its investigations of unjustified wealth, in spite of the upheaval caused by the resignation of the Agency's President, Horia Georgescu. He was arrested in March 2015, following allegations he was involved in a property scam.

Nonetheless, the report concluded corruption in the country was still a "deep-seated societal problem with consequences for both government and economy". In particular, question marks hang over judicial independence and "deficient legislative practice" that allows for the "sudden introduction of changes through parliament, bypassing better regulation and consultation". Greater transparency is needed in publishing information about progress in combatting corruption. Romania needs to explain why its prosecutors refuse to lift parliamentary immunities and so enable the prosecution of a politician.

Iulia Cospanaru, director adjunct at Transparency International (TI) Romania, told Sputnik the conclusions were "very much consistent" with the organization's own Corruption Perception Index. Moreover, many of the report's recommendations directly result from TI's advocacy efforts.

Romania scored 48 points in the CPI, ranking 57th in the world and 24th-25th in the European Union, with Hungary. The only EU member states scoring less points were Italy (47), Greece (44) and Bulgaria (41), which came last within the EU, and 75th in world terms.

In a statement, Victor Alistar, director of TI Romania, recommended speeding up the application of corruption prevention measures, and increasing the accountability of decision makers at both central and local levels.

"Romania must standardize internal administrative procedures and clearly define individual responsibilities for each and every participant in a procedure, correctly and unequivocally define the rules governing the management of public affairs, and change its approach, favoring the prevention of errors instead of sanctioning those who commit errors. This would lead to a better management of public resources and a cleaner administration," Mr. Alistar said.

000000
Popular comments
Corruption Runs Rampant in EU too, so they only do as their masters.

NATOisEVIL
27 January 2017, 17:34 GMT1
000000
That was sooooo predictable when they joined the EU. How come that the Banana nations around the Mediterranean are not mentioned such as Portugal, Spain. Italy, Greece. Perhaps not as corrupts as the East Europeans but never the less are still corrupt.