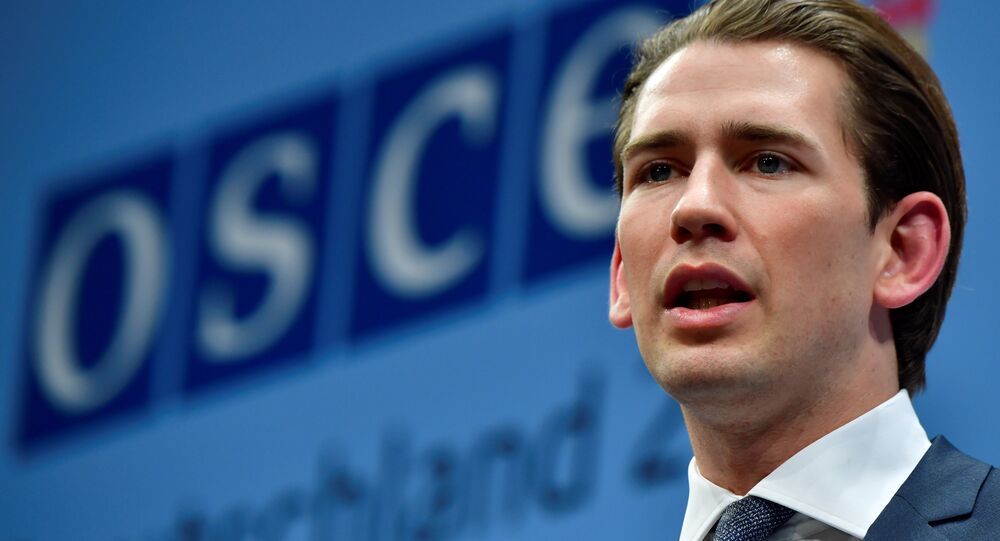 New OSCE chairman Sebastian Kurz has declared he wants to build bridges in Europe and lift anti-Russian sanctions, but it remains to be seen whether he can repeat his successful handling of the recent migrant crisis, Austrian commentator Stefan Haderer wrote.

Addressing the OSCE council last year, the incoming chairman said that Austria will seek to mend bridges in Europe, and utilize its position in the heart of the continent to facilitate dialogue between East and West.

"During our Chairmanship, Austria will build on its role as an honest broker and foster dialogue and co-operation in the OSCE region," he said.

Last month Kurz told Germany's Der Spiegel magazine that Austria will seek to use its presidency to alter the EU's policy of sanctions, and urged Europe to begin to lift sanctions against Russia and stop thinking in terms of Cold War-era blocs.

"We need to build confidence in Europe again and move away from a system of punishment to a system of incentive," he said.

Kurz, 30, belongs to the center-right Austrian People's Party (OVP), and has been Austria's foreign minister since 2013 in a coalition government with the Social Democratic Party (SPO).

According to opinion polls, Kurz is one of Austria's most popular politicians. A Gallup survey of 600 Austrians conducted in July found that Kurz has a 42 percent approval rating, far ahead of his nearest rival, SPD Chancellor Christian Kern, whose work was approved of by 24 percent of respondents.

"His popularity rose above all during the refugee crisis, when it was comparatively hard to find praise for the German Chancellor Angela Merkel in online comments. Kurz's words are not moralizing or appeasing, but clearly chosen and sharp – and this seems to be much better received by the Austrian population."

Kurz represents a wing of European policy which strives for a strong, independent Europe like that dreamed of by former French President Charles de Gaulle. His vision for the EU is in contrast to "Transatlanticists" like Merkel, Haderer wrote.

"In Brussels, fronts are hardening between two ideological camps. On the one hand there are politicians such as Luxembourg's Foreign Minister Jean Asselborn, who supports Angela Merkel and her 'welcome culture' and who reproach Kurz's 'right-wing ideas.' This group includes some people who can be called 'Transatlanticists,' because they are dependent on the White House for many of their ideas. Many representatives of this camp, for example, supported regime change in Libya and Syria and supported sanctions against Russia – without discussing risks, mistakes and their own weaknesses."

"The other camp, which Kurz probably belongs to, strives for a change in foreign policy and wishes for a strong, independent Europe, which former French President Charles de Gaulle also dreamed of. Kurz has also repeatedly criticized the EU's dependence on Turkey. With the closure of the Balkan migration route, the Austrian foreign minister was able to convince critics from the other camp. However, solutions have still not been created for the ongoing refugee crisis," Haderer wrote.

© AP Photo / Armin Weigel/dpa
Blow to Schengen as Austria Refuses to Re-Open German Border
Kurz was instrumental in the closure of the Balkan migration route in March this year, when he traveled to Eastern European neighbors to agree on the imposition of border controls.

In August Kurz told Germany's Rheinische Post that the migration route will remain closed, and that doing so sends a clear signal to economic migrants.

"(In 2015) the countries of the Western Balkans were encouraged to send the trains further. This signal inspired refugees from all over the world to leave. The gateway to Europe was open. Now we have a reversal in trend. The borders are tight and the people smugglers' prices have risen rapidly. Illegal migration has become more unattractive," Kurz said.

That position has since been echoed by leading EU politicians such as European Council President Donald Tusk. Tusk opened a migration summit in Vienna in September saying that "we need to ensure, practically and politically, that the West Balkan route of illegal migration remains closed forever."

However, it remains to be seen whether Kurz's successful handling of the migration crisis can be repeated during his leadership of the OSCE.

According to Haderer, while Kurz's declaration that Austria intends to build bridges during its OSCE presidency is an admirable one, success in this area will ultimately depend on other parties to negotiations.

"The idea of building bridges – an active Austrian policy of negotiation between the US and Russia – sounds very tempting. However, success will not be decided in Vienna, but in Washington, Moscow and the capital cities of Eastern Europe," he concluded.