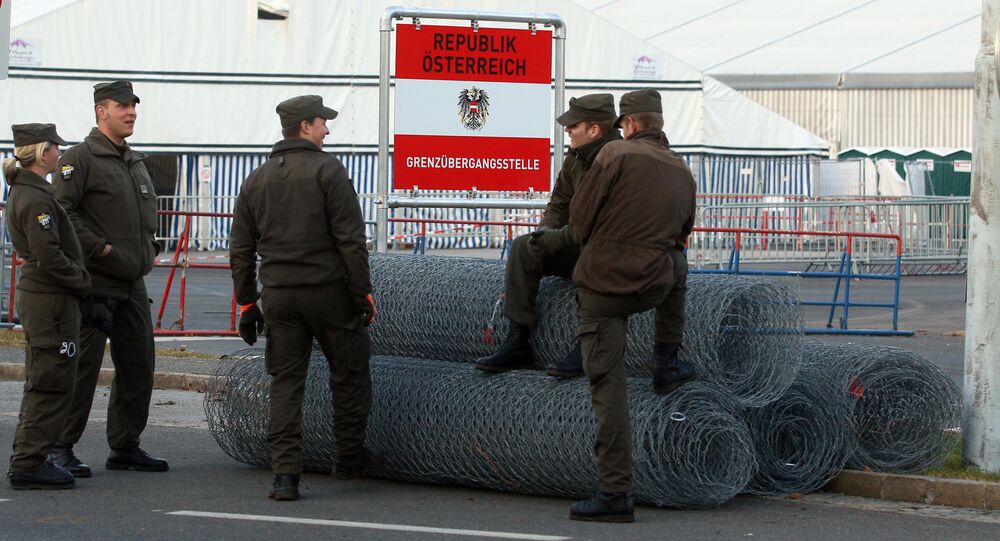 © AP Photo / Kerstin Joensson
Stop Refugees? Austria Calls for Military Involvement in Balkans to Cut Off Migrant Influx
Austria is warning Balkan countries to prepare for the consequences of its imposition of border controls, as Austrian Foreign Minister Sebastian Kurz made a tour of five countries of the region this week to discuss the issue.

Kurz began his trip across the Balkans in Bosnia on Monday, before visiting Serbia, Montenegro and Albania discussing the migration crisis with politicians in the region. His trip will finish in Macedonia on Friday.

"If we just stopped refugees at our border, there would really be pressure on the West Balkans," Kurz said on Monday at a press conference with his Bosnian counterpart Igor Crnadak.

Kurz said that Austria wanted to find a common solution with Balkan countries, particularly those like Serbia and Macedonia which are popular migration routes.

"We don't want to put a burden on anyone that he can't shoulder."

© AFP 2021 / DIMITAR DILKOFF
Serbia Limits Balkan Route to Migrants Seeking Asylum in Austria, Germany
"There are limits to how far Serbia can go," Serbian Prime Minister Aleksandar Vucic  said after meeting with Kurz on Tuesday, explaining that if Austria, Slovenia and Croatia close their borders, Serbia would be forced to react.

"We will protect our border with Macedonia if necessary," Vucic said.

On Wednesday Kurz was asked at a press conference in Podgorica whether Montenegro was threatened by the prospect of Austria closing its borders.

He replied that while Montenegro so far was not on a migration route, such a move would have consequences for the whole region, because "there is a possibility that countries that so far have not been, become a part of the transit route."

His Montenegrin counterpart Igor Luksic told the press that Podgorica had made preparations in the event of Austria putting in place border controls and that it would take appropriate measures in line with the rest of the governments of the region.

​'It is necessary to reduce the flow of refugees to Europe. Secure the borders in an orderly way and strengthen cooperation with Balkan countries,' Kurz tweeted on February 5.

In Tirana on Thursday, Kurz made similar comments after meeting with Albanian Foreign Minister Ditmir Bushati, saying that it was possible that Austria's move could change migration routes.

​'Kurz: We are closing our borders and Serbia, Croatia and Montenegro are doing the same,' B92 reported.

"We are following all possible routes that refugees could use," Ditmir Bushati responded to Kurz's warning.