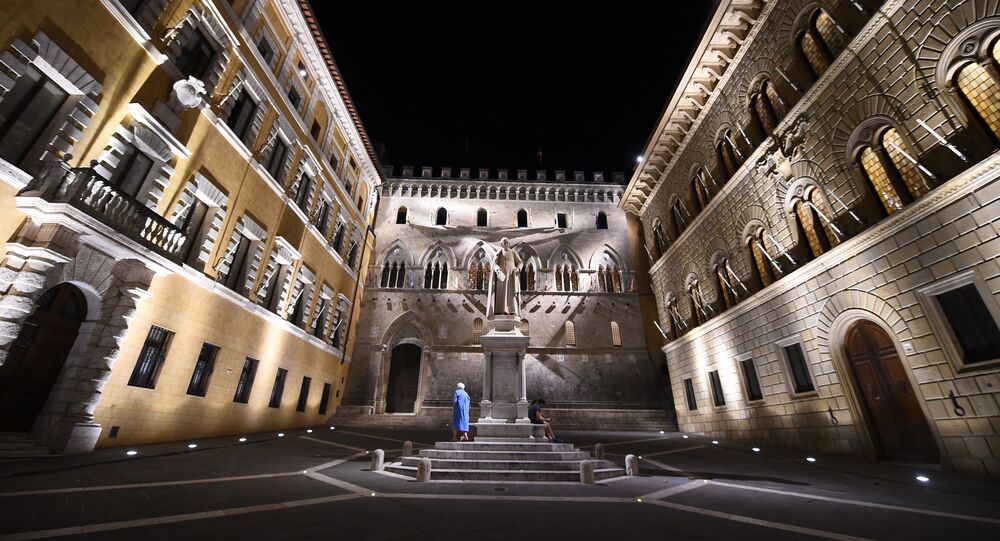 The prospective bailout of Italy's Monte dei Paschi is symptomatic of the symbiotic relationship between the EU and the financial industry which threatens to end in "financial fascism," financial expert Ernst Wolff told Sputnik Deutschland.

“The problem is that the allegedly well-founded analyses of these 'experts,' like the usual reportage by the true culprits to the current problems — speculators, bankers and the politicians under their control – spread panic where it's completely inappropriate and trivialize where urgent attention is needed,” Wolff said.

The potential fall of Italy's Monte dei Paschi bank, which is struggling under the weight of billions of euros of non-performing loans, is a case in point, he said. Italy's oldest lender made a loss of 1.15 billion euros in the third quarter of 2016, and distressed loans make up 38 percent of its assets.

Most press coverage focuses on the rescue of the bank, using EU taxpayer's money, in the context of fears about a possible domino effect across the EU and global financial system if the bank fails. However, Wolff says that more attention should be paid to the social and political consequences of a bail-out, or bail-in, of the struggling institution.

According to an EU directive introduced in Janaury 2016, if the Italian government is to act it must force the losses of a failing bank onto its creditors rather than the taxpayer.

This principle was followed in 2008 following the collapse of banks in Cyprus and in late 2015 to four banks in Tuscany. However, the move led to a wave of protests by investers and with more than 150,000 private investors in  Monte dei Paschi, the government is keen to avoid protests and their political consequences, Wolff said.

“The ECB, especially with German pressure, has tried to convince the government in Rome but without success. This has resulted in Italy now breaking the current law with the consent of the EU and the ECB in order to keep the Monte dei Paschi above water by means of a bail-out.”

“In fact, the EU, which is disintegrating before our eyes, refuses to force the bail-in on Monte dei Paschi because it is afraid that the expropriation of shareholders and savers will trigger a popular uprising and could lead to a bank run that is highly dangerous to the banking system,” Wolff said.

© REUTERS / Alessandro Bianchi
Banking Cornerstone for Itexit? Italy Gov’t Poised to Nationalise Monte Paschi
In December the Italian government announced the creation of a 20 billion euro ($21 billion) fund to help distressed banks, including Monte dei Pasche. The government insisted that the new plan will be consistent with EU rules requiring losses to be borne by creditors, but added that around 40,000 retail bondholders holding bonds sold by Monte dei Paschi will be protected. These retail investors have claimed they were unaware of the risks of holding subordinate debt when they purchased the bonds.

Wolff said the failure of the EU to enforce its own so-called "bail-in" rule shows that in fact the bloc sees no option but to eventually return to bail-outs for struggling banks like Monte dei Paschi, which will have drastic consequences for working people in Italy and other EU countries.

"The government in Rome will use all the means at its disposal to save the money spent on the rescue of the banks, ie, it will reduce social spending, raise taxes, extend the low wage sector, further soften the labor laws and possibly lower the minimum wage," Wolff said.

"All these measures will further exacerbate the already deep social crisis in the country. At the same time, the situation in the banking sector will not be fundamentally improved by saving Monte dei Paschi. The problems are only postponed and will reappear in the near future. This means that when the next crisis occurs, the potential for a social explosion will be even greater than at present," he warns.

Citizens in the rest of the EU are likely to reject the prospect of a renewed burden to bail out Italian banks. However, the bailout of Monte dei Paschi will make it impossible to enforce bail-in rules elsewhere in Europe; instead there will be more bailouts, more money printed, further depreciation of the Euro and a further boost to bubbles in the bond, equity and real estate markets.

© REUTERS / Max Rossi
Italy Faces Banking Crisis as ECB Denies Help
In the knowledge of the economic consequences of more bailouts, Wolff said that big financial players are likely to agree with the EU and ECB to return to the bail-in system, but this system can only be imposed at the cost of public disorder. Wolff has coined the term "financial fascism" to describe the political price of such an economic system.

"Since the financial industry also knows that at the end of this path, the only alternatives are crash or hyperinflation, they will ultimately demand that politicians and the ECB change course and return to the bail-in. However, this will only be possible with the use of force against citizens — the reason why the police and the military are currently being deployed everywhere (on the pretext of combating terrorism)," Wolff believes.

"If. however, the deployment of the police and military isn't enough, the financial industry will be left with one possibility: it will abolish what remains of democracy and follow the route of fascism."

"The alleged 'experts' don't tell us anything about this. Instead of warning us, they conceal and obscure a highly dangerous development which is unfolding before our eyes."

"Trusting these 'experts' means not recognizing the real deep-routed impulses of change in our society and going unprepared into a future characterized by exacerbated austerity, increasing inflation, an increase in state violence and a further restriction of democratic rights. Not to mention the resulting ever-increasing international conflicts and an accompanying increasing danger of war," Wolff warned.