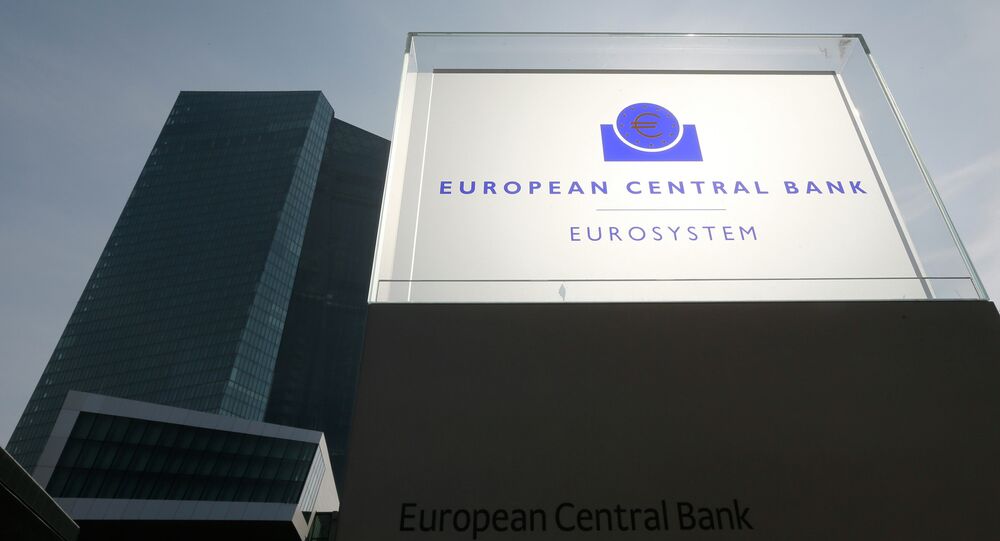 The ECB is getting ready to pour additional liquidity into the economy in order to stave off risks of disinvestment should the UK leave the European Union on June23.

© REUTERS / Neil Hall
Brexit Supporters Take Wide Lead 13 Days Before Referendum, Poll Says
Kristian Rouz – The European Central Bank (ECB) said they are gearing up for the UK leaving the European Union (EU) by activating swap lines to financial institutions should the Brexit trigger capital outflows in the short-term. Meanwhile, major European Banks are already facing declines in stock valuation, with dynamics in yield curves suggesting the market is weighing a greater possibility of the ‘Out’ vote in the UK. As volatility increases ahead of the June 23 referendum, additional euro-denominated liquidity might come in handy for the European banking system, particularly so given that the ultra-accommodative monetary conditions are failing to boost either growth or inflation in the near-to-mid-term.

The ECB announced they are ready to pour extra euro liquidity to financial institutions through the existing mechanisms of swap lines should the UK decide to leave the EU. In such a scenario, additional euros would help calm the markets and boost the already-battered banking sector capitalization, staving off the risks of massive financial turmoil amidst the uncertainty of the potential effects of Britain’s separation from the bloc.

“Life won’t change much after the referendum — these agreements and contracts will still be in force,” Ilmars Rimsevics of the ECB Governing Council, and also the head of Latvia’s central bank said. “If they’ll be needed and there is some sort of shock, then of course these lines will work.”

Meanwhile, the European banks are tumbling and crumbling, as the prospect of Brexit becomes increasingly likely.

During the past two weeks, the European financial institutions suffered the worst blow to their capitalization in two years, hinting at possible massive capital outflows in case of Brexit. Deutsche Bank dropped to its record lowest, according to European stock market data. Considering these developments, Brexit might potentially be a worse hit to mainland Europe than to the UK itself. Either way, the upside of this is that the overheated European stock markets would cool to be more in line with the sluggish overall growth in the region.

Another factor is the Bank of England (BOE) being inclined to hike base rates from the current low of 0.5% by 0.25-0.5% shortly after the referendum to support sterling and lure investment capital back to the Albion. Given the euro’s weakness, no wonder the mainland European banks are first in line to take the blow.

The collapse in the European banks’ yield curve suggests Brexit is quite likely. Whilst the discrepancy between yields on two-year and ten-year Deutsche bonds dropped to the low of 0.5634, the EU banks are facing a mounting disinvestment pressure.

“The environment is fundamentally supportive of these low yields, and there is nothing in sight, at least in the short term, that could trigger a trend reversal,” Marius Daheim of Frankfurt branch of Skandinaviska Enskilda Banken AB. “If you look in the euro zone, you have Brexit risks that have risen recently, and that is also creating safe-haven flows.”

In October 2013, the ECB, the BOE, and several other European regulators agreed the current swap lines be converted into standing agreements to prevent market volatility stemming from additional liquidity pouring into the regional economy. This time around, however, re-commissioning these agreements as swap lines would in fact have more of a calming effect to the markets: the overall growth is dismal, and standing agreements do not help. There is also no point to further observe the agreement when the BOE is not part of the equation any longer.

Earlier in June, the ECB President said the regulator is prepared to do what it takes to curb the post-Brexit risks.