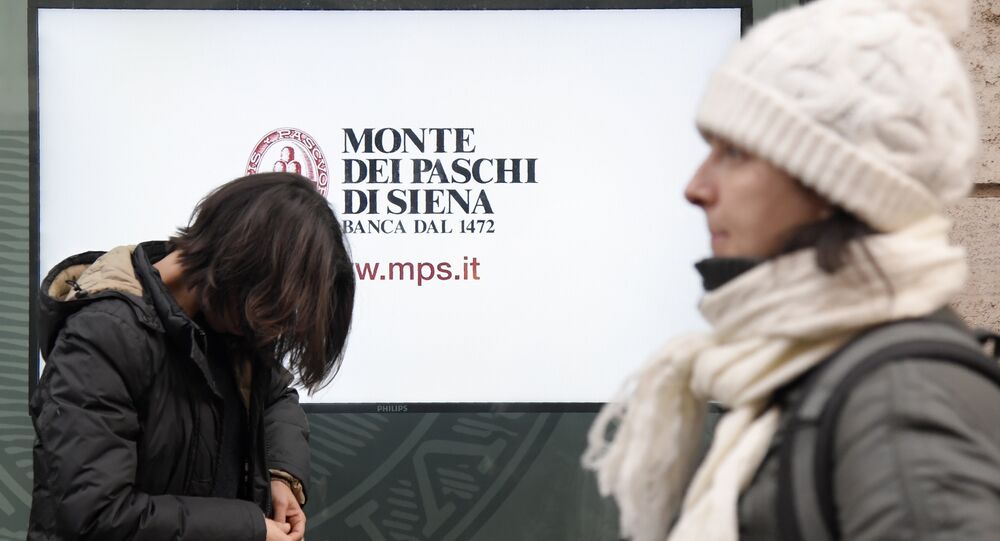 The Italian government is preparing to bail out the world's oldest bank, Monte dei Paschi di Siena (MPS), after attempts to mobilize a €5 billion (US$5,24) rescue package collapsed - and an economist has told Sputnik that the bank's troubles could spread elsewhere on the continent.

The board of Italy's third largest bank had hoped private investors would come to the rescue, but had only managed to secure less than half the desired total during the bank's funding round. An unnamed anchor investor, believed to be the Qatari sovereign wealth fund, was said to have wavered at length before pulling out decisively.

​The failure to secure a deal means that the bank will fail to meet the end of year deadline for improving its balance sheet imposed by the European Central Bank (ECB), demanded at the start of 2016, unless the Italian government steps in and fills the funding gap itself. The demand came after an ECB stress test of 51 European banks found MPS was the weakest on the continent. In all, Italian banks hold bad debts of €36 billion (US$38bn).

Olivier Vardakoulias, senior economist at the New Economics Foundation, said a bailout was likely — and it was also likely other banks will have to be bailed out too, not just in Italy but the whole of Europe.

"The problem in Italy is the amount of non-performing loans in banks' coffers, which is a large chunk of the total loans issued in the country. These banks are fragile, and this may translate into a slow-motion panic, whereby people move en-masse to withdraw their savings and/or move them to other countries, such as France and Germany. For the time being this will be restricted to Italy, but the problem extends to countries such as Portugal and Spain and could spread further," Vardakoulias told Sputnik.

​Vardakoulias is particularly concerned that the current banking model across Europe is extremely poorly designed — it effectively incentivizes capital flight, he believes:

"Domestic banking systems can only be backed up individual member states. This is a deadly entanglement, because private debt can become public in countries where public debt is already high. Italian banks are unlikely able to absorb these losses on their own. A proper banking union would mean the ECB could take over failing banks and nationalise them, clean their books, and sell them back to new shareholders. This was the approach taken in the US."

​If such an approach doesn't materialize, he believes there's a "very high" risk of Eurozone disintegration in future, as the worst affected countries will not be able to deal with the potential fallout.

"The more bad assets banks hold, the weaker their capitalization, the less and less deposits they attract, the less they can lend to productive sectors economy," Vardakoulias told Sputnik.

A government salvage looks almost certain, given the Italian parliament approved a €20 billion (US$21bn) rescue fund for the banking sector on December 20. However, for the bailout to be achieved, the Italian government may have to impose losses on bondholders, as EU rules prevent taxpayers from shouldering the cost of private bank losses.

This said, around €2 billion (US$2,09bn) of MPS' bonds are held by private investors, such as individuals and small businesses, and as such holdings under €100,000 (US$105,000) may be protected under EU deposit guarantee rules.

The bailout could have significant domestic political implications. Matteo Renzi, who stepped down as prime minister December 7, had indicated he would run for re-election in 2017.