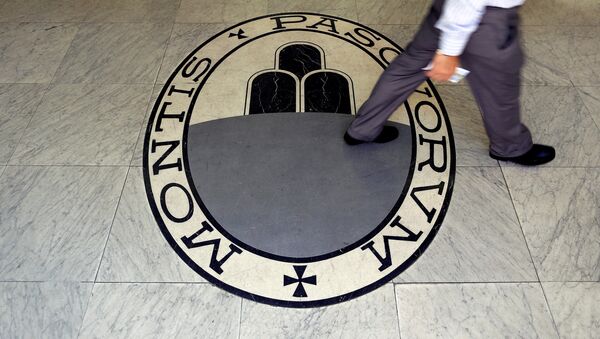 Italy's government is set to press ahead with a private rescue plan to bailout the country's main banks despite expectations that an attempt to rescue the country's finances will fail.

Monte dei Paschi di Siena, the world's oldest bank, has until the last day of 2016 to raise US$5.2 billion in the value of its shares or face being phased out by the European Central Bank (ECB).

However, two sources told Reuters news agency that the Italian government will pump US$15.6 billion into its bank to prevent the interjection by the ECB.

According to Italian daily newspaper La Repubblica, Italy's government is set to make US$ 15.6 billion available in a decree on December 22, so that it can help two smaller, regional banks which have been rescued by the state already this year.

#Italy gets a taste of its own medicine! #MontePaschi gets #ECB 'NO' for bid on more time on capital. Stock plunges. pic.twitter.com/Ob6nOGYwmE

​The legacy of the 2008 and 2009 global recession lies heaviest on Italy's shoulders, with its banking sector still saddled with US$380 billion worth of defunct loans.

Monte dei Paschi di Siena about to be nationalised in new Italian banking crisis after ECB leaves MPS out to dry? Curtains for bond holders?

Monte dei Paschi de Siena, established in 1472, is receiving advice from investment firm JPMorgan and Mediobanca, which are working towards writing off 28 billion euros in bad loans from the bank's books.

Bail Out & Bail In

According to EU banking rules, if a member state is bailed out by the Eurozone, it must also be bailed in — which can leave savers out of pocket. Meanwhile, Monte dei Paschi de Siena has already walked out on a deal with JPMorgan, instead the bank wants to swap bonds for stock rather than convert the bonds into shares.

However, Brussels is feeling wary of the political instability growing in Italy due the rise in popularity of the country's Eurosceptic and anti-establishment 5-Star Movement party.

The party has already spoken out about the potential bail out, suggesting that JPMorgan's fees be voided if Italian taxpayers end up footing the rescue package bill.

"We would have never done a deal like that with JPMorgan. In any case we would not pay the commissions if the bank had to be nationalized," Alessio Villaros, a lawer with 5-Star said.

​The government bailout is likely to inflict pain on many Italians' saving  accounts but with the 5-Star Movement party leading the polls, bail in and bail out talks will become difficult for EU ministers in Brussels.