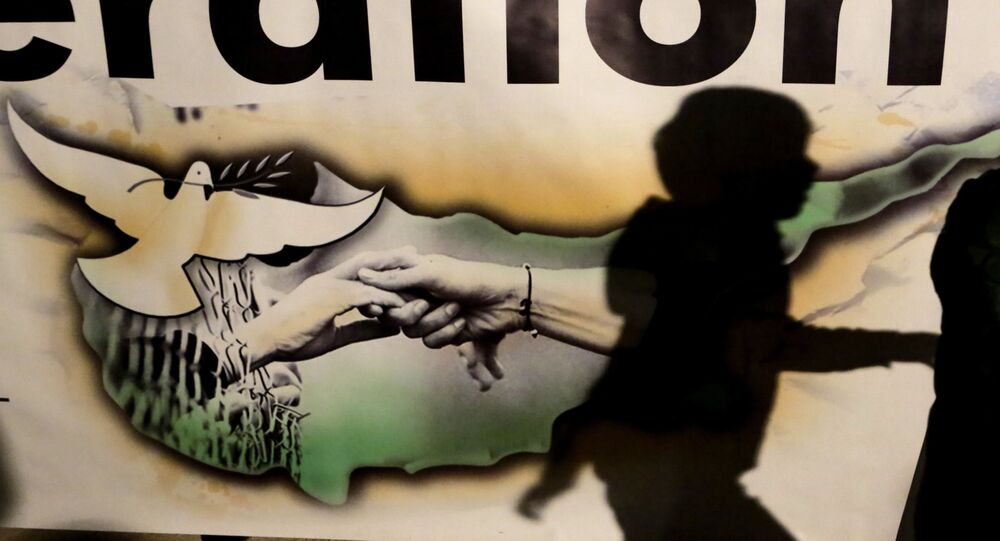 The EU is redoubling efforts to reunite Cyprus under its auspices, but the crises stricken-bloc doesn't have the resources to do so, Mustafa Turkes, lecturer in International Affairs at the Middle Eastern Technical University in Ankara, told Sputnik Turkiye.

On January 9 the President of Cyprus and the leader of the self-declared Turkish Republic of Northern Cyprus will meet for talks in Geneva, as European leaders try to find a solution to the division of the island.

It is planned that Cypriot President Nicos Anastasiades and Mustafa Akinci will hold three days of talks, before a five-way meeting with diplomats from the UK, Turkey and Greece, which are the guarantors of a power-sharing agreement drawn up when Cyprus gained independence from British colonial rule in 1960.

The EU's foreign policy chief Federica Mogherini has made a political agreement to end the division of Cyprus a priority of her term of office, and during a visit to Nicosia in October she stressed the benefits of ending the decades-long deadlock over the issue.

"This will be not only a turning point, a historic page for the island; this will be an extremely important step for the entire region … Our role as the EU is to accompany the leaders and their determination in a way that can be beneficial for all Cypriots to live in a united European Cyprus."

She added that the EU is keen for Nicosia to regain control of the whole island, including the self-declared state of northern Cyprus, under the auspices of the EU.

"Obviously, the best guarantee for security of any country in the world is a well-functioning state, and particularly for any member of the EU is being a member of the EU itself. As you understand well, we are entering the last crucial phase of the negotiations," Mogherini said.

© Sputnik / Collage
Turkey Might Support Cyprus Reunification Deal After Failed Military Coup
NATO Secretary-General Jens Stoltenberg and US Assistant Secretary of State for European and Eurasian Affairs Victoria Nuland have also welcomed the talks, with the latter visiting the island in October and meeting with leaders as UN special advisor Espen Barth Eide brokered efforts to reach a settlement.

Mustafa Turkes, lecturer in International Affairs at the Middle Eastern Technical University in Ankara, told Sputnik Turkiye that the renewed effort from the EU and its US ally results from a desire to strengthen their presence in a strategically important region.

"The EU above all wants to consolidate the position it has in Cyprus. It doesn't want Russia's role to strengthen. Secondly, attempts by Israel, Egypt and Turkey to divide the region around Cyprus, with the so-called Exclusive Economic Zone, are provoking new conflicts. From this point of view resolving the Cyprus issue suits the interests of the EU, which wants to significantly strengthen its presence in the Mediterranean Sea," Turkes said.

"If you ask how hegemony is formed in the Mediterranean basin, the answer is the presence of four islands there. Whoever controls the four major islands is dominant. Therefore, no one wants to leave this island. The main reason that it is important for the EU, is that it gives an opportunity to increase its presence in the region."

"When Syria shot down a Turkish plane (in 2012), Turkey couldn't find out why and how it was shot down but the United Kingdom had this information thanks to radar stationed on the island. We see that Cyprus has regained its strategic importance," Turkes said.

Just before Cyprus joined the EU in 2004, a UN-brokered deal to unite the island fell through after it was rejected by the Cypriot government and subsequently voted down by 76 percent of Greek Cypriots in a referendum. Any prospective peace plan must have public approval from both communities in a referendum.

The EU's then-Commissioner for Enlargement said that he was disappointed with the decision, which meant that EU law will only apply to the Greek Cypriot community.

"There is a shadow now over the accession of Cyprus," Guenter Verheugen said.

Over a decade since that setback, the EU has renewed its interest in a reunited Cyprus, but Brussels' ability to resolve the issue is compromised by the economic crisis the bloc is already facing, Turkes said.

"It is difficult to solve the property issue, that of ownership. There is a great need for money. Who will provide it? There is no answer to this question. I can't believe that the crisis-torn EU will take on that kind of responsibility."

© AP Photo / Seth Wenig
Solving Cyprus Issue Primary Aim for Entire Europe - Tsipras
The UK, Turkey and Greece are party to a power-sharing agreement made when Cyprus gained independence from British colonial rule in 1960. It is part of the 1959 London-Zurich series of agreements on the island's constitution, which included stipulations about the rights and political representation of the island's Greek and Turkish ethnic communities.

The power-sharing agreement also limited Cypriot sovereignty and declared the United Kingdom, Greece and Turkey to be guarantors of the "independence, territorial integrity and security" of Cyprus, and gave them the right to intervene militarily in Cypriot affairs.

The agreements allow all three countries to have a military presence on the island, but Turkes said that one precondition for a reunification deal is the departure of foreign forces.

"The British need to get rid of their bases and completely leave the island. If they don't do that, then other players won't take their forces away either," Turkes said.

Cyprus has been a divided island since 1974, when the Greek Cypriot National Guard, with the support of the Greek military junta in Athens, carried out a coup d'etat in an effort to unite the island with Greece.

Turkey invaded northern Cyprus in response, citing its position as guarantor of Cyprus as justification for the military intervention. Turkish troops took control of around 37 percent of the island's territory, as a result of which Cyprus became a de facto divided country. Today, Turkey maintains the presence of some 35,000 troops in the breakaway northern part of the island, which is a sticking point in negotiations for a peace deal.

In 1983 Turkish Cypriots, with the support of Ankara, proclaimed the secession of northern Cyprus and the formation of an independent state called the Turkish Republic of Northern Cyprus. The declaration was declared invalid by the UN Security Council, and is only recognized by Turkey.

Talks on Reuniting Cyprus to Continue Despite Deadlock - President Anastasiades