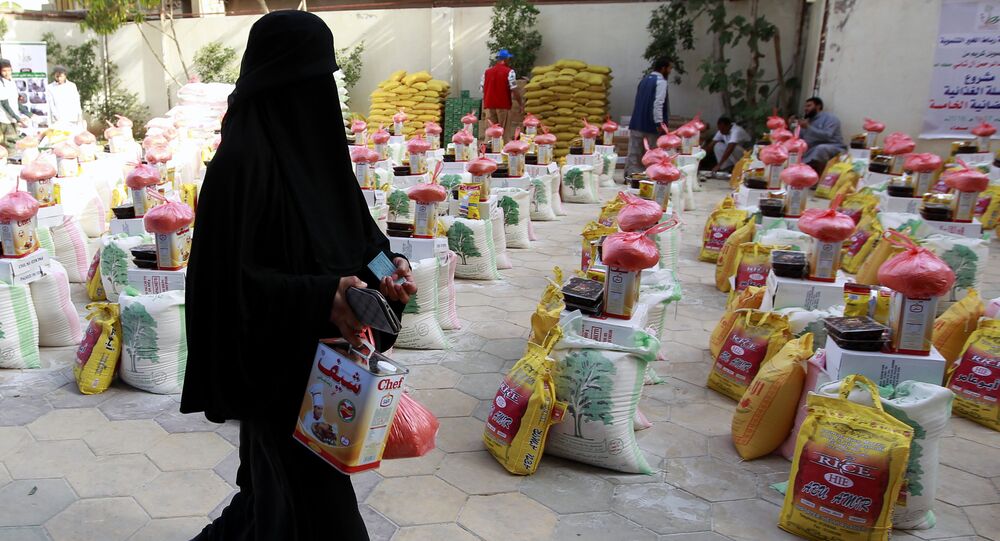 Men, women and children in Yemen are at risk of "catastrophic hunger" as the conflict between a Saudi Arabian led coalition and the Yemeni government continues.

Mass unemployment, rising food prices and a drop in exports means people in Yemen could run out of food fast, international charity Oxfam has warned.

"Yemen was already the poorest country in the Middle East with high rates of malnutrition before the conflict between with Saudi Arabia and the Yemeni government on one side and the Houthis on the other began 20 months ago," Maya Mailer, head of humanitarian policy at Oxfam told Sputnik.

"It's since got much worse. Ninety percent of Yemen's food is imported and after the conflict began Saudi Arabia imposed blockades which meant it was difficult for food and fuel to enter."

And despite an easing in restrictions to allow some food into the country, it remains difficult for supplies to be moved around, according to Maya Mailer, because "so much of Yemen's infrastructure has been destroyed."

And it's not just food having difficulty entering the country, there's a fuel import crisis too with Yemen only receiving a quarter of what it needs, according to Oxfam.

Meanwhile the UK continues to issue export licenses to Saudi Arabia, despite frequently coming under pressure from MPs, NGO's and parliamentary select committees to stop after it emerged the bombs and munitions were used by Saudi Arabian forces

The British government's response to Yemen's food, fuel an humanitarian crisis is "incoherent," according to Maya Mailer, head of humanitarian policy at Oxfam.

War-torn #Yemen is slowly starving to death and #British-made bombs are fuelling the crisis. RT to tell @BorisJohnson that it’s got to stop. pic.twitter.com/auaYIK6BQK

​"On the one hand you have the UK and the US providing humanitarian assistance, which is vital, but we also see the difference made by the UK issuing arms export licenses and munitions to the Saudi-led coalition which is causing great destruction."

"It's not receiving the media coverage it deserves. Amnesty, Oxfam, the UN, and a parliamentary enquiry have all reported on the humanitarian situation and the killing and the maiming of civilians has been well documented," Maya Mailer told Sputnik.

​"There is every reason why [the UK government] should understand what is happening, there are many independent reports on the scale of the humanitarian situation in Yemen," she said.

According to the United Nations, malnutrition is on the increase with more than half of the population of Yemen left without access to a reliable source of food or fuel.

"That combination, plus food shortages, high prices and job losses in an already poor country means millions of people are facing hunger where 1.5 million children are already severely malnourished. This is devastating," Maya Mailer told Sputnik.