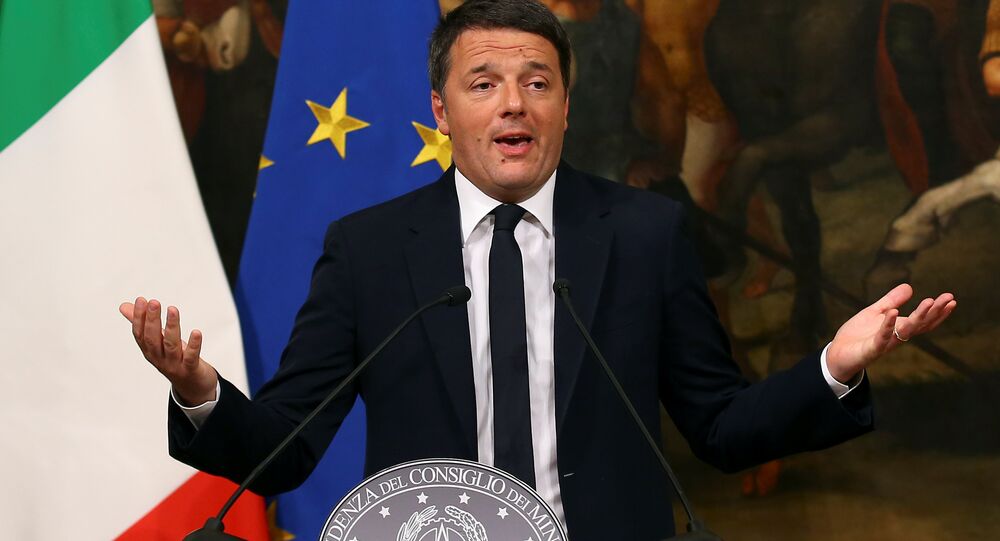 The announcement by Italian Prime Minister Matteo Renzi that he is to resign in the wake of his failure to push through changes to the country's constitution has sent the Eurozone and financial markets into chaos as the zone's third-biggest economy faces political paroxysm.

Although Renzi's referendum was ostensibly designed to reduce the powers of the upper house — the Senate — and regional authorities, it was effectively a vote of confidence in Renzi, the Eurozone and the EU. He argued the reforms to the constitution would cut bureaucracy and increase competitiveness, but his detractors said it would give more power to those already in power.

Renzi had made much of his links with Berlin and Paris, while pushing the EU agenda. However, with the rise of the right-wing highly euroskeptic Five Star movement cashing in on the Brexit referendum result, Renzi was facing increasing unpopularity at home.

In the end, it was a pronouncement on Renzi himself, who admitted in defeat:

"I take full responsibility for the defeat. I will greet my successor with a smile and a hug, whoever it might be."

Although President Sergio Mattarella will likely appoint a prime minister — the fourth without an electoral mandate — Italy remains the subject of deep worries in the EU.

​[Renzi's tweet ahead of his resignation announcement: "Thank you all, anyway. In a few minutes I'll be live from Palazzo Chigi. Long live Italy!]

Italy is already in breach of Eurozone debt rules and government bonds and stocks plunged on the news that Renzi was set to resign Monday (December 5) with investors spooked by fears that Italy's financial fragility could plunge the whole Eurozone into another crisis.

Its banks are also facing severe problems, with one of its biggest — and the world's oldest — Monte dei Paschi di Siena requiring a US$5.33 billion rescue package before the end of the month to avoid being wound down.

"We believe the 'No' vote makes it more difficult for Monte dei Paschi to find an anchor investor. Based on the size and valuation of the capital increase needed, the challenge looks sizable," Morgan Stanley analysts said in a note.

With Italy's financial stability in peril and the fact that the right-wing populist Five Star movement have inflicted a huge wound to the Rome establishment, there are growing doubts over the fate of the EU itself.

The Brexit referendum result, June 2016, followed by the rise of Donald Trump in the US comes amid growing nationalism throughout Europe, with French, German and Dutch elections due next year. French President Francois Hollande has announced his intention not to run again, in the face of growing support for the right and right-wing parties.

German Chancellor Angela Merkel — although seeking a fourth term — is spending most of her time firefighting over the migrant crisis and attempt to keep the Eurozone together, with Greece and Italy among other countries falling foul of fiscal rules.

In the Netherlands, Geert Wilders' right-wing PVV party would hold the most seat in parliament, if an election were called today, according to the latest polls.

Renzi's resignation marks the end of a rollercoaster ride for a prime minister who came to power as Italy's youngest PM, staking his reputation on close relations with the EU — even nominating his Foreign Minister, Federica Mogherini, as the new High Representative of the Union for Foreign Affairs and Security Policy — and yet who was brought down in the face of growing antipathy for the union.

Italy to Vote in Constitutional Referendum That Might Trigger Renzi Resignation