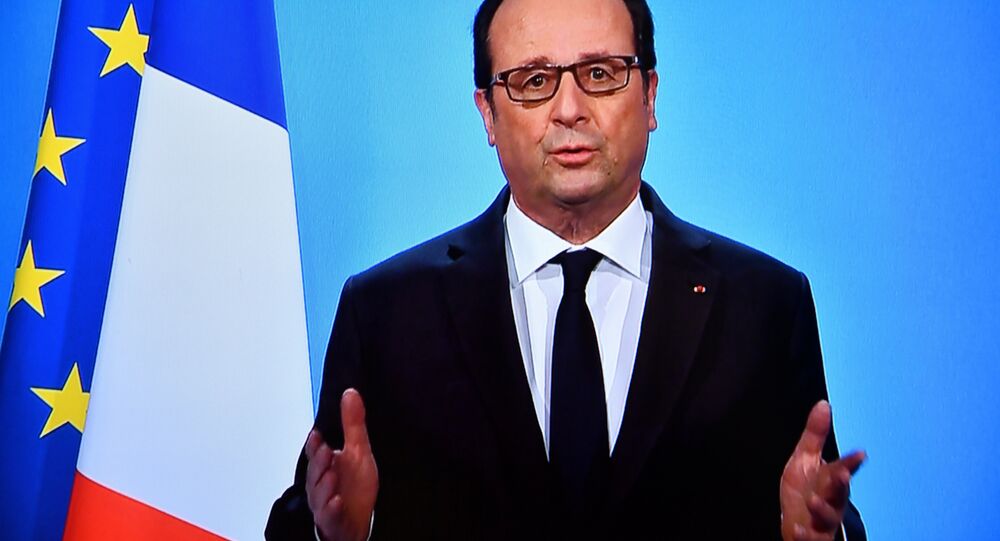 The shock decision by French President Francois Hollande not to stand for a second term - a first in the history of the Fifth Republic - was the inevitable result of his record unpopularity, failure to turn round the economy but - most of all - the preservation of his own dignity, Sputnik has been told.

Hollande shocked France with his decision — announced in a TV address — not to stand for a second term, in spite of the fact that he was clearly unpopular and unlikely to make it past the first vote in the primary elections for the Socialist Party in January.

However, many still felt that he would at least throw his hat in the ring — especially as he had entered into talks with his own Prime Minister Manuel Valls, who was mooted to be standing against his president. Valls publicly dismissed this, telling news agency AFP "there cannot be any political confrontation in a primary between a president and a prime minister".

In the end, though, Hollande's decision was personal. According to Gino Raymond, Professor of Modern French Studies at the University of Bristol, UK, there was an inevitability about it because of his deep unpopularity.

"It's a huge relief for many of his Socialist Party because — as he admitted himself, effectively — he would not have been able to gather the party around him. He was effectively caught between a rock and a hard place. He knew that, if he had presented himself as a candidate in the primaries — which are going to take place in January of next year [2017], he would not win," Raymond told Sputnik.

"There was talk that he might not present himself at the primaries, but as a candidate for the presidential elections next spring, but he would have done that without a mandate from his party, which would have damaged his credibility."

"So, he preserved his own dignity by doing it, because otherwise he would have faced a humiliating situation of possibly being rejected by his own party and — if he had gone forward as a candidate in the presidential election — being humiliated by the country. You can call it a strategic retreat, but he preserves his dignity and goes at his own choosing instead of being thrown out," Raymond told Sputnik.

Hollande knew his unpopularity was down to his being unable to turn round the fortunes of the French economy and the fact that he caused massive anger over his deeply unpopular reforms to France's strict labor laws. The controversial changes — which have seen unions and students stage months of strikes and protests — gave employers more scope to lay-off workers, cut costs and allow some employees to work far longer than the current maximum 35-hour week.

© AFP 2020 / FRED DUFOUR
Striking workers of the French state-run rail operator SNCF, backed by French unions CGT and Sud-Rail, protest with flares during a demonstration against reform plans proposed by the French government, on June 18, 2014, at the Austerlitz train station in Paris

Hollande's withdrawal will allow the right-wing Socialist Valls to declare his hand in the primaries, alongside Arnaud Montebourg, the left-wing former minister (briefly under Valls) and others, which may make for a stronger bid from the Socialists.

© REUTERS / Philippe Wojazer
Victory for Fillon in Presidential Primary Marks Earthquake in French Politics
However, Hollande's former economy minister Emmanuel Macron is standing as an Independent — having started his own party, En Marche — which could dilute the center-left vote.

Whatever happens — Hollande's decision aside — the runaway candidates will inevitably be French center-right Republican candidate Francois Fillon, who saw off former president Nicholas Sarkozy in the Republican primaries, and Marine Le Pen, leader of the right-wing Front National.