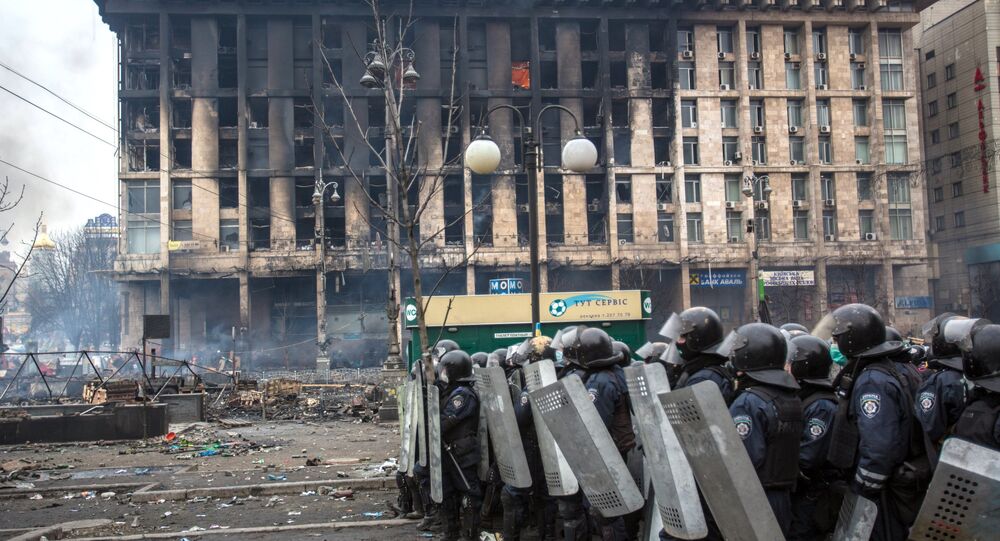 Ukrainian ex-lawmaker Vladimir Oleynik plans to appeal to Ukrainian, Russian and European courts to establish that the events which took place in February 2014 in Kiev were a coup d'état against Ukraine's lawful authorities. Ukrainian observers say that if Oleynik's effort succeeds, it will have far-reaching consequences for Ukraine and the world.

© Sputnik / Andrei Stenin
Yanukovych Accuses Kiev of Planning Provocations Ahead of Maidan Court Case
Speaking at a press conference at the Rossiya Segodnya press agency in Moscow on Thursday, Oleynik explained that a formal adjudication of the events of February 2014 as a coup would mean that the current authorities in Kiev are illegitimate, thus requiring new elections for Ukraine's presidency and the country's parliament – the Verkhovna Rada.

Pointing to Article 109 of the Ukrainian Criminal Code, which sanctions "actions aimed at forceful change or overthrow of the constitutional order or take-over of government, and the conspiracy to commit such actions," and carries with it a maximum punishment of ten years, Oleynik called on international courts and legal institutions to bring the organizers of the 2014 coup in Kiev to justice.

The former senior lawmaker stressed that a formal judgment would set an important legal precedent, hopefully helping to prevent the illegal seizure of power in other countries in the future.

© Sputnik / Vladimir Pesnya
Former People's Deputy of Ukraine's Verkhovna Rada Vladimir Oleinik has proposed that events in Kiev in February 2014, which culminated in the Maidan coup d'etat, be given a formal legal adjudication.

Commenting on the ex-lawmaker's proposal, Ukrainian journalist and activist Yuri Kot said that while Oleynik has virtually no hope of seeing decision in his favor in any Ukrainian court, there is hope "in the Russian and European justice systems."

© AFP 2020 / SERGEI SUPINSKY
Steinmeier's Role in Ukraine Coup 'Should Prevent Him From Becoming German President'
Kot explained that a legal ruling on the events of the so-called Euromaidan would be of interest not just to Ukraine, but Europe and the world as well. "Looking ahead, I will say that there are people in Europe who are interested in seeing justice prevail in this case – who would like to see that our coup be recognized as a precedent," the journalist noted.

Kot also stressed that even if authorities in Kiev do not recognize any foreign legal ruling, it would have an important legal and psychological effect for ordinary Ukrainians. "The authorities can refuse to recognize all they like. But Ukrainian citizens, who have suffered from the criminal behavior of these usurpers…will have every right to obtain the status of political refugees."

Furthermore, a ruling on the coup's illegality "would allow them to write to European courts, explaining that their rights and freedoms are being violated, that a seizure of power has taken place in their country, that the constitution is being violated," etc.

A formal ruling would also have important implications for the laws passed by the governments which have come to power since February 2014, according to the journalist. "Appointments to the government, the election of the president, the election of the Rada, the Association Agreement with the EU, and especially the decision on raising utilities prices – all of this has been illegal!"

© Sputnik / Evgenia Novozhenina
Three Years After Euromaidan: Life in Ukraine 'Has Become Considerably Worse'
At the same time, Kot noted that Ukrainians would have a right "not to execute the criminal orders given to them by authorities." This includes military personnel fighting in the fratricidal war in eastern Ukraine. "They would receive the legal grounds to refuse to carry out illegal orders of their commanders," the journalist emphasized.

Ultimately, Kot emphasized that a formal legal ruling on the Maidan would not "by any means" mean the restoration of the country's old authorities to power, which have themselves been implicated in the corruption and lawlessness which helped facilitate the coup.

Instead, he noted, "upon recognizing that a coup took place, Ukraine will receive a unique opportunity to reboot its government, taking into account the bitter experience it has received and the errors which have been made. Based on this, the new government will have an opportunity to build a truly just state, which includes the rule of law, no cult of personality, no 'thieves codes', where everyone is legal before the law."

© Sputnik / Andrey Stenin
Study Proves Maidan Snipers Were Western-Backed Opposition’s False Flag
For his part, Ukrainian political scientist Alexander Dudchak suggested that the results of court hearings on the illegality of the events of the Euromaidan would be unnerving to authorities in Kiev no matter what ruling a court reaches, since the truth – about the mysterious snipers who shot and killed police and protesters during unrest leading up to the putsch, about the secret involvement of European and American officials, and about the brutality of the civil war in eastern Ukraine, would finally come out.
© AP Photo / Andrew Kravchenko, Pool
U.S. Assistant Secretary for European and Eurasian Affairs Victoria Nuland and Ambassador to Ukraine Geoffrey Pyatt, offering cookies and (behind the scenes) political advice to Ukraine's Maidan activists and their leaders.

"Lawlessness must be fought with law, and laws have their own power. And criminals must be dealt with as the law decides," Dudchak concluded.