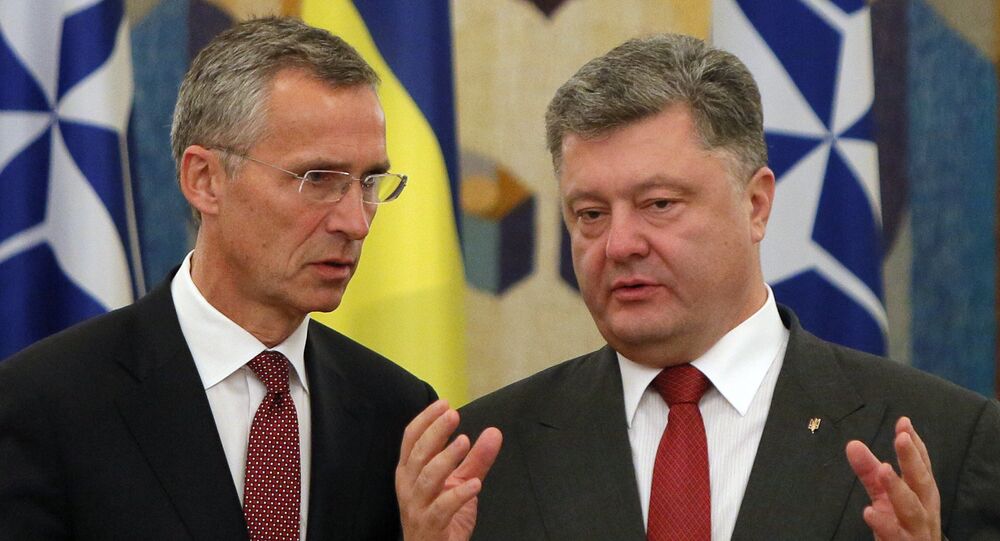 Officials from Ukraine's breakaway Donetsk People's Republic have stated publicly that Sunday's killing of militia commander Arseny Pavlov was a declaration of war by Kiev. Experts speaking to one of Russia's leading online newspapers warn that the smoldering conflict needs just one big spark to grow into a war that pulls in both NATO and Russia.

On Sunday, Arseny Pavlov (aka Motorola), commander of the DPR militia's Sparta Battalion, was killed in an explosion in his home. Officials from the self-proclaimed republic quickly pointed the finger at Kiev for the commander's death, citing repeated threats and attempts against Pavlov's life by Ukrainian forces.  DPR leader Alexander Zakharchenko stated bluntly that the attack constituted a violation of the ceasefire, and an effective declaration of war.

Pavlov's death served only to add further tensions in the fragile ceasefire between Kiev forces and the Donbass militia. In the past few days, both sides have accused the other of repeated ceasefire violations, and Donetsk and Lugansk intelligence has reported a buildup of heavy equipment along the contact line, as well as the presence of foreign mercenaries in the area. Last week, unconfirmed reports emerged that militia had shot down a Ukrainian helicopter with NATO instructors onboard.

© AFP 2021 / VASILY MAXIMOV
Murder of Donetsk Militia Commander Threatens to Reignite Ukraine's Civil War
On Monday, Kiev forces launched a probing attack on the settlement near the village of Leninskoe in Donetsk region after a preparatory barrage of artillery and mortar fire. A DPR Defense Ministry spokesman said that Ukrainian nationalist volunteer forces and foreign mercenaries were present in the assault.

"All data on the violations of the Minsk agreements by the Ukrainian side and the locations of the banned weapons of the Ukrainian military have been handed over to representatives of the OSCE mission and the Center for Ceasefire Control and Coordination," Basurin said.

In Lugansk, the militia has reported that Ukrainian forces have increased sorties by UAVs, which conduct reconnaissance and even drop improvised bombs over the contact line.

Despite the spate of provocations, DPR and LPR officials have emphasized that they will continue to adhere to the Minsk agreements. Nevertheless, DPR leader Zakharchenko has said that he has concerns that Kiev is deliberately refusing to adhere to its commitments under the peace deal.

"According to publically available data, the armed forces of Novorossiya [the confederation including the DPR and LPR] consist of two army corps – the 1st (Donetsk) and 2nd (Lugansk). Information about them is extremely limited, but it is known, for example, that the Lugansk People's Militia incorporates the separate 2nd and 4th brigades, one artillery and one armored brigade, reconnaissance units, territorial defense battalions, etc. Its armament includes T-64 tanks, BMP-1 and BTR-80 APCs, 2S1 self-propelled guns, BM-21 Grad artillery, MSTA-B and Strela-10M SAMS, etc."

© AFP 2021 / Aleksey FILIPPOV
DPR militia forces leave their position during withdrawal in the village of Petrovske, some 50 km from Donetsk, on October 3, 2016

The number of personnel in the Donbass militia has not been officially disclosed, and is difficult to calculate, Mardasov noted.

"As for the Ukrainian Army, Ukrainian experts note that among its 268,000 troops, no more than 30,000 are on the front line at any one time. In the course of the war in the Donbass, the army has suffered severe losses (including at least 130 T-64B/BVs, according to openly available information)…"

The Ukrainian Armed Forces are powerful enough: "Soviet stockpiles have been enough to form new units, formations, and even two new operational commands in addition to the existing Western, Eastern, Southern and Northern commands." Still, the army has also been plagued with severe personnel and supply shortages.

© Sputnik / Stringer
Tanks in the streets of Kiev, brought in for a practice run of the military parade dedicated to Ukraine's Independence Day, celebrated August 24.
© Sputnik / STR
Kiev Fears Mass Desertion From the Army as Donbass Campaign Sputters
Last month, President Petro Poroshenko vetoed a law that would allow contract soldiers to break their contracts early. At the same time, NATO instructors have made an effort to gradually improve the training of Ukrainian personnel. On Sunday, Ukrainian Armed Forces Chief of Staff Viktor Muzhenko announced that four battalions have already been trained according to NATO standards.

Commenting on the dangers posed by a possible resumption of the civil conflict, independent military expert Borish Rozhin (aka Colonelcassad) told Svobodnaya Pressa that a war burning out of control would threaten to pull in NATO and Russia.

"It's clear that the DPR and LPR corps are set up for strategic defense," the expert said. "That is, in case of an offensive by Kiev, the militia will have to meet Ukrainian units, wear them down as much as possible, and only then to move to any kind of offensive."

For now, Rozhin suggested, the stalemate is likely to continue, with recent Ukrainian military probing offensives, such as a recent fighting near Mariupol, failing to meet with any success.

"In general, this is the situation which we have witnessed for two years now, and it seems that it will continue to develop along these lines. But the war between the Ukrainian Army and the DPR and LPR militia is not being fought in a vacuum. If the situation is exacerbated, certain foreign players are likely to increase aid, and even [commit a] direct military presence, which will drag the war into a Korean War or Vietnam War scenario, where the US and Russia will stand directly over local armed formations."

© REUTERS / Mykola Lazarenko/Ukrainian Presidential Press Service/Pool
Stratfor Says Ukraine Ceasefire Might Work…As Congress Prepares to Send Weapons
Accordingly, "a great deal rests on politics, because Ukraine, like Syria, is part of a confrontation between the US and Russia."

For now, the analyst noted, it is unlikely that the Obama administration will decide on a military solution vis-à-vis their client state in Kiev. At the same time, however, "if the next president wants to put an end [to the Minsk agreements], we will see a military solution: Kiev will try to capture the DPR and LPR, and the republics, following defensive operations, will attempt to expand their territory to neighboring areas."

Andrei Frolov, editor-in-chief of Arms Export magazine, believes that Russia too would be unlikely to sit idly by if the Ukrainian military launched any sort of successful offensive to wipe out the Donbass republics. As things stand, however, the militia have proven themselves fully capable of standing on their own. "From chaotic units with a variety of motivations, varying levels of readiness and equipment, they have created a system with a single command, headquarters, uniforms and armament." More work remains to be done in this direction regarding inter-republican coordination, according to the analyst.

As far as the Ukrainian Armed Forces are concerned, Frolov is convinced that their size is their biggest weakness. The Ukrainian military budget is simply insufficient to properly train and equip existing forces. "In my view, the Ukrainian Armed Forces would be better off with 100,000 well-armed and trained soldiers than the 280,000 ragged troops who experience constant supply problems. For now, Ukrainians can only win the war via human wave tactics…of the same kind Iran used in the Iran-Iraq war. But it's obvious that Kiev will not attempt to do so."

© Sputnik / Valery Melnikov
Over 9,600 Killed, 22,400 Wounded in Donbass Conflict – UN Mission
As for the reports about foreign mercenaries, Frolov stressed that this factor alone could not change the course of any war; their numbers are simply insufficient. The training of separate battalions according to NATO standards is also unlikely to affect the strategic situation, according to the analyst.

Finally, Alexander Khramchkhin, deputy director of the Institute of Political & Military Analysis, suggested that training to NATO standards will not bring Kiev the expected benefits. "What victories on land has the North Atlantic Alliance ever achieved? The Ukrainian army retains at least some combat capability precisely because it is Soviet, not NATO," in training, structure and mentality. "As soon as the Armed Forces are completely trained up to NATO standards, they will cease fighting altogether."