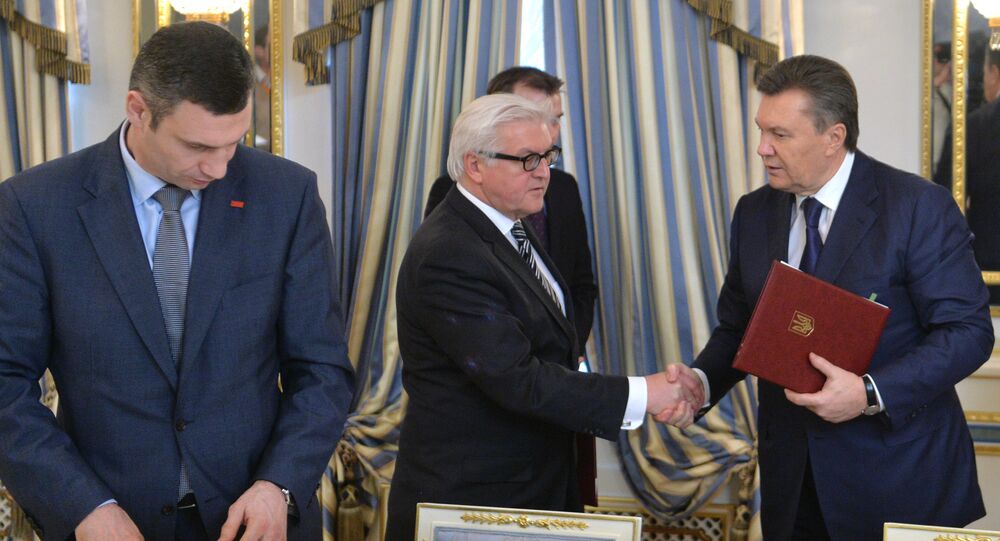 Ukrainian ex-lawmaker Vladimir Oleynik says that the February 2014 coup d'état in Ukraine must be formally adjudicated as such. Commenting on Oleynik's remarks, German lawmaker Andrej Hunko told Sputnik that German Foreign Minister Frank-Walter Steinmeier's role in the coup should disqualify him from the German presidency.

On Thursday, criticizing Kiev's foot-dragging and non-fulfillment of its obligations under the Minsk agreements on peace in eastern Ukraine, Oleynik stated that it must be legally established that a coup took place in Ukraine. The politician added that it's essentially useless to negotiate with authorities who came to power in an illegitimate manner.

Pointing to Article 109 of the Ukrainian Criminal Code, which penalizes "actions aimed at the violent change or overthrow of the constitutional order or the seizure of state power," Oleynik called on international legal institutions to bring the organizers of the 2014 coup in Kiev to justice. The former lawmaker stressed that this would set an important legal precedent, preventing illegal seizures of power from taking place in other countries in the future.

© AFP 2021 / TOBIAS SCHWARZ
Coming Round: German Politicians Praise Trump and Invite Him to Germany
Speaking to Sputnik Deutschland, German lawmaker Andrej Hunko explained that Oleynik's demands have wider implications, particularly due to the support shown for the coup plotters by German Foreign Minister Frank-Walter Steinmeier and his French and Polish counterparts. In February 2014, these officials had brokered a deal between the Yanukovych government and opposition forces. Hours after the deal was negotiated, the Ukrainian president was forced to flee the country in fear for his life.

Unfortunately, Hunko noted, Steinmeier's complicity in the coup is unlikely to impact his chances of being chosen as Germany's next president in February.

"And this in spite of the fact that the German foreign minister recognized the government of the coup plotters in Ukraine, thus tearing up an agreement signed just hours earlier between then-President Yanukovych and the leaders of the Maidan," Hunko stressed.

Speaking to the Die Linke Party lawmaker after the coup, Steinmeier justified his actions by suggesting that Yanukovych had himself torn up the agreement with the opposition by deciding to flee Kiev. But this is a ridiculous argument, Hunko said, "because the former president was in fear for his life. One cannot declare an agreement invalid because someone is afraid for his life."

© Sputnik / Evgenia Novozhenina
Three Years After Euromaidan: Life in Ukraine 'Has Become Considerably Worse'
Hunko lamented that discourse on Ukraine is simply being silenced in Germany today. That is why the Oleynik story is unlikely to affect the upcoming presidential selection. "Nobody remembers this — on the contrary," the lawmaker stressed. "In Germany, there is an opinion that in the context of the conflict between Russia and the EU, Steinmeier actually takes a more moderate stance, for example by calling NATO's Anaconda drills 'saber-rattling' and allowing himself to make other critical statements."

Because of this, Steinmeier's image in Germany is one of moderation and opposition to confrontation. Therefore, Hunko noted that even if litigation were to conclusively show that the events of Maidan did constitute a coup, this will not play any role in Germany's presidential politics.

At the same time, Hunko stressed that Steinmeier's decision to walk away from the agreement with Yanukovych was a catastrophic mistake. "It was a huge mistake. Think about it: if the agreement was put into practice, the situation in Ukraine today would be very different. And the situation in the Donbass, which has resulted in many victims, would not have come to pass."

© Sputnik / Andrei Stenin
Yanukovych: Current Kiev Gov't Came to Power 'Amid Blood and Lies', Has No Future
Ultimately, the lawmaker suggested that Steinmeier and his French and German colleagues did not stand up to defend the deal with Yanukovych because Western politicians had the geopolitical goal before them of pulling Ukraine into the Western sphere of influence.

"This was also the purpose served by the Association Agreement between the EU and Ukraine, which Yanukovych sought to postpone. That is why Western politicians accepted the upheaval leading to the coup, and ignored the fact that neo-fascist forces were present in the transitional government."

Moreover, Hunko noted, "the West had insisted on new elections, which in the circumstances post-coup were won by Petro Poroshenko. However, these elections were not as representative as the elections before them, and this is the reason why future developments have led to thousands of casualties and the destruction of the Donbass."

Coming Round: German Politicians Praise Trump and Invite Him to Germany