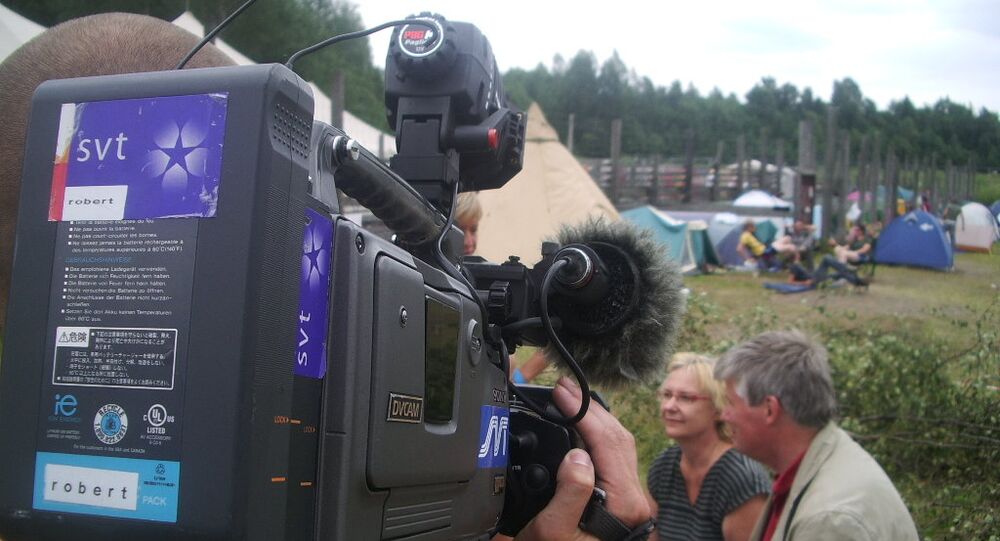 Last year, many Swedes took the government's pledges to make Sweden a "humanitarian superpower" to heart with the most ardent humanists even breaking the law for the sake of their beliefs. Today, Swedish journalists from the state-owned media are on trial for human trafficking.

© Wikipedia
Man's World: Swedish Feminists Rebel Against Male Dominance in Textbooks
Journalist Fredrik Önnevall of the national broadcaster SVT and two of his associates are now on trial for human trafficking for smuggling a Syrian boy from Greece to Sweden in connection with the shooting of the documentary series "Motherland." In the series, which was subsequently criticized for indiscriminately promoting a left-wing agenda, the SVT team smuggled the 15-year-old Syrian boy from Athens to Sweden, where he could seek asylum. The boy later obtained a residence permit in Sweden, and reportedly goes to school there.

The smuggling sequence was reported to the authorities by a number of viewers, but Önnevall was adamant in that he had not broken the law, having acted for "humanitarian reasons." However, the road to hell is paved with good intentions and the fact that he obviously meant well has not spared him from investigation. Malmö Prosecutor Kristina Amilon accused Önnevall of human trafficking together with two of his colleagues.

In 2015, when the migrant crisis reached his peak, many Swedes were reported to use their cars and boats to smuggle asylum-seekers arriving from Denmark via the Øresund Strait, with thematic Facebook groups mushrooming on both sides of the straight, Swedish newspaper Dagens Nyheter reported. The clandestine humanitarian activity started to wane with the introduction of border controls at the beginning of 2016. However, humanitarian organizations, such as Danish Medmenneskesmuglerne, whose members are also on trial for human trafficking, reportedly work on bypassing ID checks, which supposedly restrict the right to asylum.

© Photo : Pixabay
Crazy for Daesh? Sweden to Employ Psychiatry Against Terrorism
By his own admission, Fredrik Önnevall did not regret committing the crime, because the teenager "risked his life" by staying in Greece instead of coming to Sweden as an "unaccompanied refugee child."

"I felt that I, as a fellow human being, must help a boy who was in a tremendously difficult situation in which he risked life and limbs. I made that decision I have never regretted," a proud Fredrik Önnevall told Swedish Radio.

"We have great respect and understanding for Fredrik and his team, who chose to help [the boy] in this situation, where a child pleads for help," Micael Lekberg told Swedish Radio.

© Wikipedia / Neptuul
Sweden Gains UNSC Leverage Through Logrolling With 'Authoritarian' Nations
SVT is the Swedish national public TV broadcaster, largely modeled after the British broadcasting systems and sharing many common traits with its British counterpart, the BBC. SVT, which has over 2,200 employees, is a quasi-autonomous non-government organization. Despite the fact that the company is formally owned by an independent foundation, SVT board members have party affiliation and are appointed by the Swedish government.

Previous surveys revealed that SVT journalists had much stronger sympathies for left-wing parties, such as the Left Party and the Green Party, compared with the rest of their compatriots. In February, a survey by pollster YouGov revealed that Swedish media in general had the strongest leftist bias in Europe. In particular, four out of ten Swedes argued that the media gave a "too left-angled" view of reality.