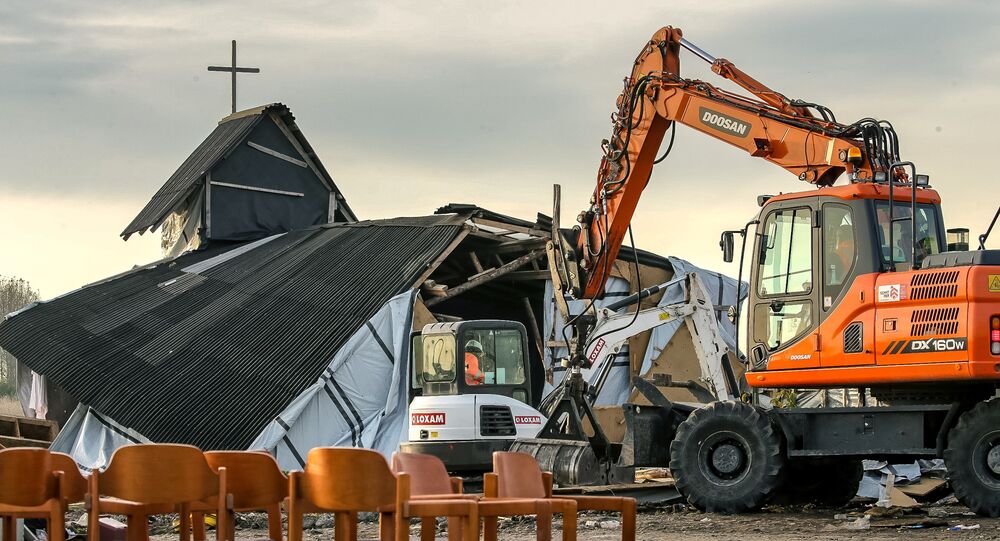 © AFP 2021 / Francois Nascimbeni
France’s Calais Evacuation Program is 'Like an Act of Violence' Against Refugee Children
More than 2,000 police officers were involved in the demolition of the Calais "Jungle" refugee camp, according to French Interior Minister Bernard Cazeneuve.

He also promised to create mechanisms that will support all those migrants who will want to return to the town of Calais.

Last Monday, authorities in northern France wrapped up a week-long operation to relocate up to 6,000 refugees and migrants from the Calais camp to reception centers across the country.

© AFP 2021 / PHILIPPE HUGUEN
Migrant woman and children hug as they leave the "Jules Ferry" reception centre, next to the recently demolished "Jungle" migrant camp after a massive operation to clear the settlement, on November 3, 2016, in Calais

Since 2015, Calais has been the home to a large migrant camp, notorious for its horrible living conditions. Thousands of migrants have been trying to cross into the United Kingdom via the Channel Tunnel between Folkestone in Britain and Coquelles in Calais.

In an interview with Sputnik, Francois Guennoc, the vice president of the local charity L'Auberge des Migrants (Migrants' Shelter), said that the demolition of the Calais refugee camp indicates that the French government "will do its best to prevent refugees from returning to the border."

"The government knows full well that most refugees from the Calais camp remain stranded and that they will try to go back to the border in the coming weeks or months. It is clear that the government's goal is to create mechanisms that could stop migrants from returning to the border," Guennoc said.

He blamed the government for pursuing an "inconsistent" migration policy, drawing attention to the fact that the government touts the creation of new mechanisms in Calais to support migrants, but turns a blind eye to the already existing mechanisms, for example, the Jules-Ferry migration center, which accommodated refugees earlier.

© AP Photo / Emilio Morenatti
Oct. 26, 2016 file photo people walk past as thick smoke and flames rise from amidst the tents after fires were started in the makeshift migrant camp known as "the jungle" near Calais, northern France.

"So if the government were consistent, it would have just left all these structures in place. All that Cazeneuve tells us are nothing but empty promises, which he isn't likely to keep," Guennoc added.

© AFP 2021 / FRANCOIS LO PRESTI
Welcome! Germany Expects French Requests for Relocation of Calais Migrants
According to him, "the situation in Calais highlights the need for greater responsibility sharing and coordination between EU member states to address current gaps in asylum and reception, and increase solidarity measures such as relocation and other legal avenues for people to reach safety."