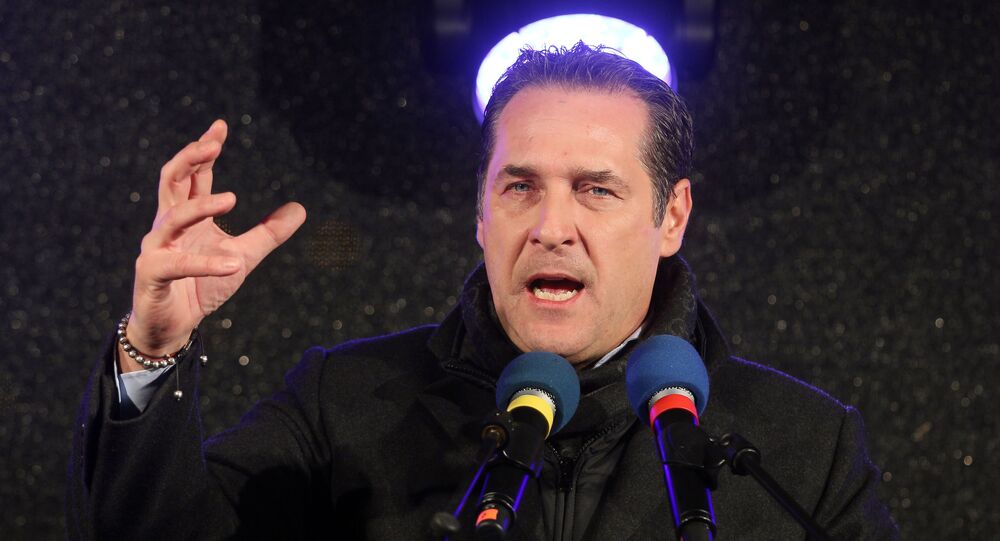 The Freedom Party of Austria wants to develop relations with Eastern European countries like Russia and Serbia, and warns the EU against following a geopolitical agenda set by the US, party leader Heinz-Christian Strache said in a wide-ranging interview with Sputnik.

"These sanctions are hypocritical and a huge mistake in relation to Russia. Our party has campaigned against sanctions since the beginning. Unfortunately, we are the only party in the whole of Austria taking this position. Here in Austria we have already lost 40,000 work places annually and suffer annual losses of over one and a half billion Euros."

"The EU's attempt to pressure Serbia into imposing sanctions on its fraternal nation, Russia, is particularly arrogant. In this way Serbia will suffer damage too," Strache said.

The Freedom Party of Austria (FPO) is the country's largest opposition party, whose candidate for the presidency Norbert Hofer is one of two leading candidates for the post.

Hofer narrowly lost to his Green-backed rival Alexander Van der Bellen when the presidential election was held in May. However, the election will be rerun on December 4 due to some voting irregularities.

In Austria's last federal elections in 2013, the FPO won 38 of 183 seats in the country's national parliament, a result the party is confident of improving on in the next elections, due to take place in spring 2018 at the latest.

The right-wing party campaigns against EU centralism, freedom of movement and "the Islamization of Europe." The party proposes a referendum on Austria's membership of the Schengen Area, and wants to immediately break of EU accession negotiations with Turkey.

© REUTERS / Stefanie Loos
Austria's FPO Chairman Slams Europe's 'Most Dangerous Politician'
Among other pledges, the FPO manifesto also undertakes to "preserve the economies of nation-states" from the dangers of multinational corporations and the single currency, and reject trade deals between the EU and US "which strengthen the power of global corporations and undermine the protection of consumers."

FPO leader Strache told Sputnik that upcoming elections in Austria, Germany and France could significantly change the politics of Europe, including with regard to anti-Russian sanctions.

"If Marine Le Pen becomes French President, she will remove the sanctions. If Frauke Petry replaces Angela Merkel in Germany, there will also be no sanctions. And if I am able, with the democratic support of the Austrian people, to become Chancellor in the next election, I will also remove the sanctions. The EU has a lot of members who are skeptical about sanctions, for example the Visegrad Four. Of course, they have some concerns about Russia because of the past, but they don't think sanctions are the right course," Strache said.

Strache thinks NATO is a burden for Europe, which causes conflict and confusion over its identity.

"The EU's problem is that it aligns with NATO in almost all aspects. That isn't good for a lasting and reliable peace in Europe. To take the example of Germany, after two World Wars the most sensible thing for Germany would be to declare neutrality, and never again enter the madness of war. We Austrians are proud of our neutrality, we fight for it and we don't want to give it up."

Strache said the EU's demands that Serbia join anti-Russian sanctions are an example of its subservience to Washington. He also criticized the Austrian government's decision to recognize Kosovo as a state.

"I think that Serbia has only one possibility to resist this pressure: to strengthen its neutrality and state constitution. The constitution should guarantee the independence of the country from military units and its neutral position in the event of armed conflicts."

"This (the recognition of Kosovo) occurred in spite of our protests. We always said that this is wrong from the point of view of international law and UN Security Council Resolution 1244. It was necessary to find the right path together with Serbia. At least, it was necessary to work together with Serbia on a joint project to oversee and protect the rights of Serbs living there, like in South Tyrol (an Italian autonomous province where the majority of the population is German-speaking)."

© AP Photo / Jens Meyer
While Berlin Burns: Merkel's Advice to Stop Islamization by Playing a Flute on Xmas is 'Too Much'
Strache said that his party is "in principle in favor of the Nabucco gas pipeline," an apparently aborted US-backed project to supply Europe with oil from Central Asia and Iraq via Turkey. The new pipeline was first mooted publicly in 2002, a year before the invasion of Iraq.

However, the FPO leader also warns Europe against allowing the US to force its own geopolitical ambitions into EU policy.

"In this orchestrated conflict in Syria we see that the interests of the US, Turkey and the Saudis regarding gas pipelines have led to the support of the Islamic State (Daesh), with the goal of toppling Assad. We also see that the US government is trying to push its own interests through the EU. If Europe wanted to find the right balance, it would leave NATO. We know that five years ago, Putin came to Merkel and Sarkozy with a proposal to create a free trade zone between Russia and the EU. But it wasn't consistent with the interests of the US. They are interested in promoting their CETA and TTIP trade agreements. That is the underlying reason for the conflicts in Georgia and Ukraine," Strache said.

"Geographically and culturally Russia is also part of Europe. We are committed to good co-operation in accordance with our values and identity, on the basis of a shared Christian identity."

"Hofer is deliberately following this policy, including during visits to the Czech Republic, Slovenia and now Serbia. In the future, he intends to deepen (friendly relations) with Poland and Hungary. The deepening of co-operation in this region is Austria's historical mission, instead of serving as the extended hand of Angela Merkel," Strache said.