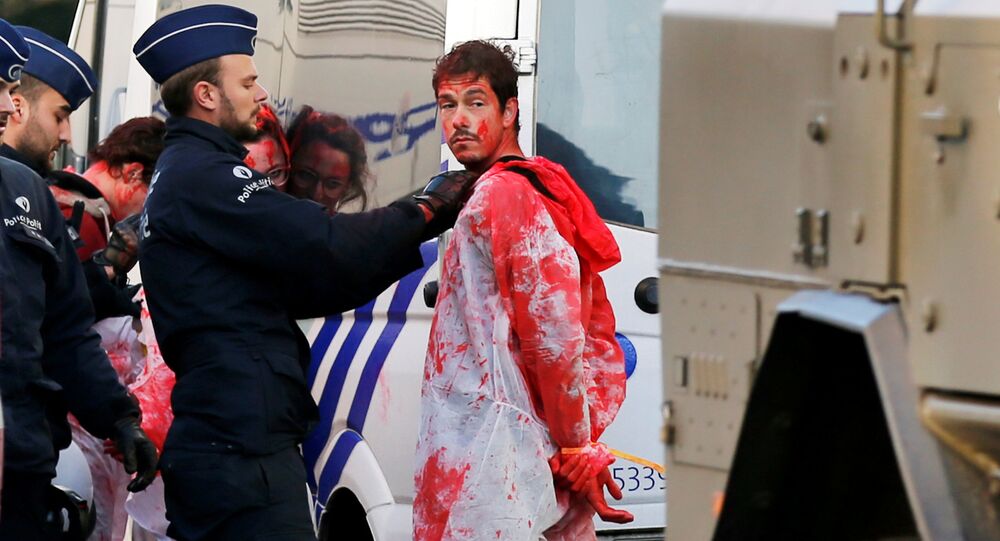 The controversial Comprehensive Economic and Trade Agreement with Canada (CETA) trade deal signed, October 30, between the EU and Canada has been dubbed a "ticking time bomb" by opponents who say it is likely to face a veto by EU politicians before it is ratified, Sputnik has been told.

© REUTERS / Francois Lenoir
CETA Canada-EU Deal: 'The Credibility of Europe is at Stake' - Ex-Quebec Premier
The CETA trade deal was due to have been signed at an EU summit, October 27, in Brussels, marking the culmination of seven years' negotiation to deliver an open trade area between Canada and the 28 members of the European Union. However, it floundered at the last minute because Belgium was not able to ratify the deal, because one of its regional parliaments — Wallonia — objected.

However, in last-minute talks, Wallonia agreed to go ahead with the deal — although the circumstances of that acceptance are shady, with the Wallonian parliament suggesting coercion on the part of Brussels.

The deal was finally signed October 30 in Brussels. However, it still faces opposition.

"The signing ceremony on Sunday means that CETA has been brought back from the dead for now — but it is a ticking time bomb. The Wallonia parliament has a promise that they will be able to stop the ratification of CETA when they get a formal vote on it, and unless there are substantial changes, they — and hopefully other parliaments — will use that veto," Nick Dearden, the director of Global Justice Now told Sputnik.

One of the major criticisms of CETA — and the proposed EU-US Transatlantic Trade and Investment Partnership (TTIP) — is the controversial Investor Sate Dispute Settlement (ISDS). This is a mechanism that companies can invoke if a signatory member refuses to allow them to sell their goods in that country, because of conflicting regulatory conditions.

Trudeau to sign #CETA on Sunday, but the deal is still "a ticking time bomb"https://t.co/LWyQlKaM7S#stopCETA #noTTIP pic.twitter.com/4yM1RKPyf1

​"The whole ‘corporate court' concept will now go to the highest European court to adjudicate on its legality — something which risks invalidating the EU's entire trade agenda," Dearden told Sputnik.

"CETA would open up our government to a deluge of court cases by North American multinational corporations and investors. It presents a threat to our ability to protect the environment, to protect the public and to limit the power of big banks. It's thoroughly undemocratic and must be stopped."

Following the signing of the CETA deal in Brussels, Jean-Claude Juncker, president of the European Commission, denied that any pressure had been put on the Wallonian parliament to agree to the deal. However, the president of the Walloon party CDH, Benoît Lutgen said: "I did not have Juncker in mind especially when I said that there was pressure, but yes, there was."

​"There were insinuations, we were made to understand that there would be consequences for Wallonia. Jean-Claude wake up! It's amazing that Wallonia has to fight alone against the multinationals, and the same thing over farmers. We don't want a Europe of multinationals," Lutgen said.

'The Cat is Out of the Bag'

Vicki Hird, of War on Want said: "This signing ceremony should be seen for what it is — a promotional opportunity designed to push a toxic trade deal and trade agenda that are in trouble.

Trade deal #CETA signed but on the ropes? https://t.co/rL8bhblTfB#NoCETA pic.twitter.com/LHwpvxlm6m

​"The deal struck this week in Belgium opens the process up to legal attack and procedural delays. Crucially, opposition to CETA is not confined to Wallonia but is spread across the EU and Canada and the deal will now be under ever greater public, national and European parliamentary scrutiny," Hird said.

"The cat is out of the bag — Canadian prime minister Trudeau and European governments know that CETA has been seriously wounded now that its true purpose has come to light," Greenpeace EU trade policy adviser Shira Stanton said.

"This agreement will probably not survive the democratic and legal scrutiny of the ratification process over the coming months. It's time for our governments to break rank with corporate lobbyists and redesign a trade policy that respects democracy and promotes the public interest," Stanton added.

People in Brussels Gather to Protest Against CETA Trade Deal