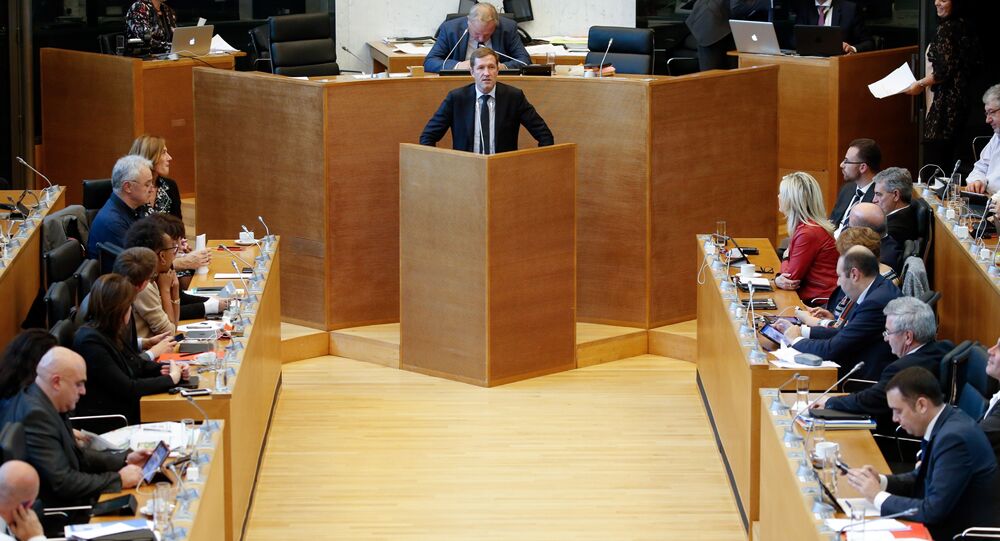 The parliament of Wallonia, a Francophone region in Belgium, has agreed to approve the EU-Canadian Comprehensive Economic and Trade Agreement (CETA), which it initially opposed, thus disrupting the signing of the deal, originally scheduled for Thursday, local media reported Friday.

© REUTERS / Denis Balibouse
Greenpeace Welcomes Belgium’s PLans to Inquire CETA’s ICS Mechanism Legality
MOSCOW (Sputnik) — The Walloon parliament has given the Belgian federal government the go-ahead to sign the agreement, while noting that it will regularly check that the implementation of the agreement has not had any negative consequences, Belgian newspaper Le Soir said.

"The motion has been adopted," Benjamin Hurard, the parliament's representative in charge of press relations, confirmed to Sputnik.

According to Hurard, the Socialist Party (PS), the Reformist Movement (MR), the Humanist Democratic Centre (CDH) and an independent lawmaker voted in favor of the new agreement text, securing it 58 votes, while five votes against came from Ecolo and the Workers' Party of Belgium (PTB-Go).

"This is a good agreement that will bring more welfare to the people," Jean-Paul Wahl, the lawmaker from the MR that supported the deal from the beginning, told Sputnik ahead of the vote.

He added that no major changes were brought to the 1,600-page agreement except "a few details in an annex text."

© AP Photo / Virginia Mayo
EU Council to Formally Approve CETA Deal With Canada by Saturday
The PS and the CDH that were initially against signing CETA "clearly needed more time and explanation," MR President Olivier Chastel said in a statement on Thursday. Chastel added that he was "satisfied that the clarification to the PS and CDH about CETA allowed them to understand the importance and value of this free trade agreement."

The MR leader also noticed that in terms of agriculture, CETA clearly limits imports of beef and pork and does not liberalize market for poultry and eggs as local farmers warned.

Later on Friday, two other Belgium regional parliaments will debate and vote on CETA with the Brussels regional parliament expected to have finished the discussion by 6:00 p.m. local time (4:00 GMT) and Parliament of Wallonia-Brussels Federation to have a final say on this trade agreement by about 9:00 p.m. (7:00 GMT).

CETA, if approved, would eliminate the vast majority of the existing tariffs between the European Union and Canada, but the opponents fear that it would negatively affect standards and regulations on environmental protection, health, safety and workers' rights.