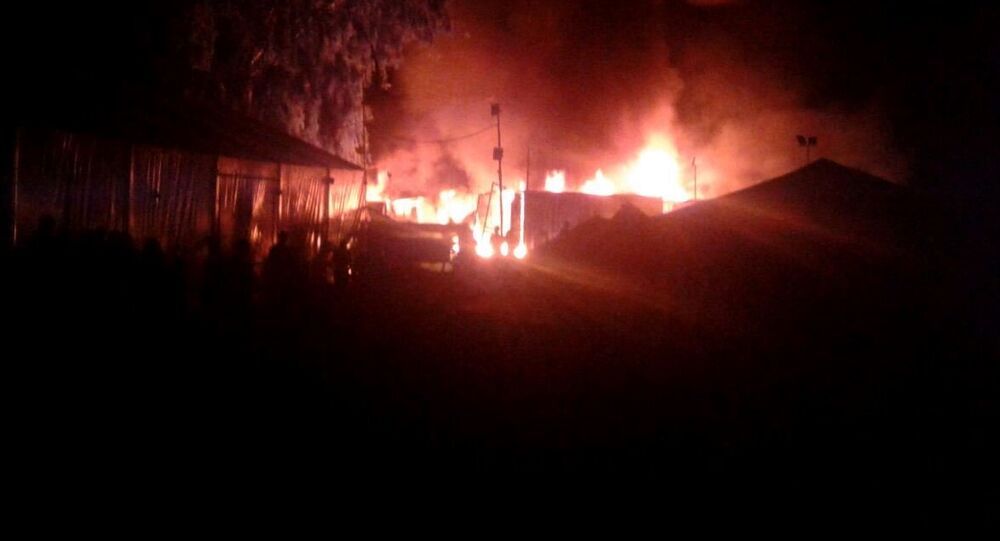 Ethnic tensions are escalating on the Greek island of Chios after parts of a refugee camp were set alight by warring factions of migrants.

© REUTERS / Giorgos Moutafis
At Least 30 Injured in Fire at Greece’s Lesbos Migrant Camp – UN Refugee Agency
The blaze destroyed eight prefabricated homes and wrecked a refugee reception center in what isn't the first time tensions have boiled over between migrants waiting for their asylum applications to be processed on the country's islands.

According to media reports in Greece, two Syrians have been detained in connection with the fire on Chios. Their dispute remains unknown — their frustrations captured.

"The fire broke out at the Souda camp at the hands of some very bad people who had been drinking wine all night," Wassim Omar told Sputnik.

Like thousands of refugees, Wassim and his family have been stuck on the island of Chios after arriving in Greece from Syria, in March 2016.

Conditions for asylum seekers on many of the Greek islands are regularly condemned by human rights organizations and aid groups as "unsanitary" and "unfit" for people to live in.

Overcrowded facilities mixed with ongoing frustrations often causes unrest in camps which have swelled in number since the European Union struck a one-for-one refugee deal with Turkey.

© Photo : Wassim Omar
Fire breaks out at the refugee camp on the island of Chios, Greece

It's been reported that refugees and asylum seekers stuck in overcrowded facilities on the islands will be moved to centers on the mainland. However a mass relocation of migrants will be avoided by the authorities.

Wassim Omar is moving to Athens on Wednesday, 12 October, where his future remains as uncertain and as it has been on Chios:

"I don't have a place there and I don't know anyone," Mr. Omar told Sputnik.

​A source at Greece's Citizens' Protection Ministry has revealed that the authorities are concerned that moving too many people to the mainland could mean they fall prey to people smugglers, according to Greek newspaper Kathimerini.