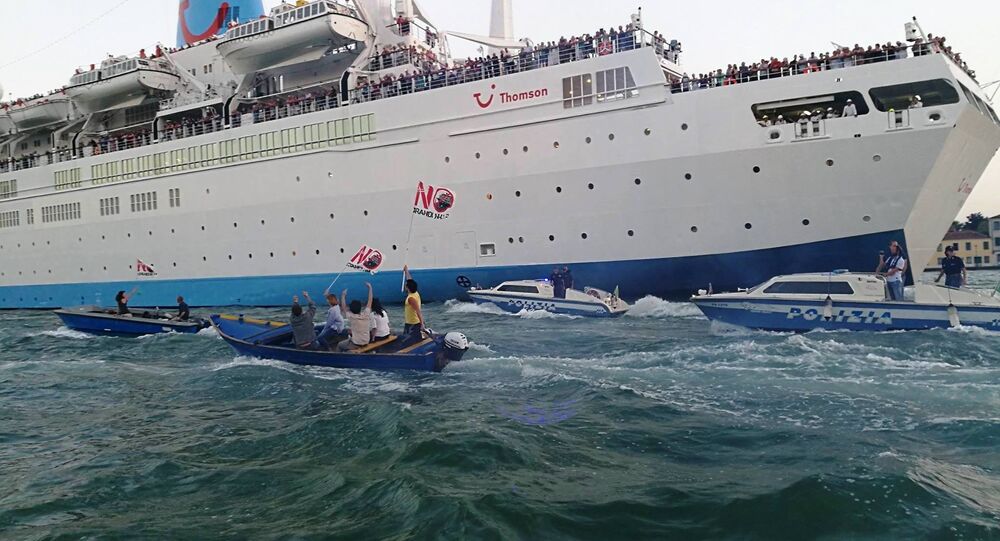 Hundreds of local protesters took to the famous waters of Venice in Italy this week, in a fight against the rising number of cruise ships and tourist numbers that visit the city daily. Despite tourism being the lifeblood of the city, the negative effect it is having on local life is said to be reaching peak levels.

Venice, is renowned worldwide as the "City of Love" and its entire history is intimately linked to Cupid. However the growing local disdain affecting the love locals have always felt for its tourism economy has been diminishing for some time.

Posters with slogans such as, "Tourists, Go Away!" and "You Are Destroying This Area" have been appearing on walls locally to convey sentiments felt by a growing number of citizens. This week a new anti-tourism demonstration took place with protesters waving fire-flares and shouting chants on gondolas and small boats to prevent the large cruise ships from entering the bay.

It is said that a growing number of local residents in Venice are feeling angry about how tourism is affecting their daily lives both culturally and in terms of the local environment. The livelihood of many independent businesses is also being affected as they are experiencing rising living costs.

The number of giant cruise ships that visit the city, especially during peak season is a concern for locals as they are known for flooding the city's streets during the day, whilst providing all-inclusive packages to tourists means they do not eat and drink locally.

All over the city, residents have started posting banners reading "No Grandi Navi" or "No Large Ships" and in addition to the disdain against cruise operators, the effect shared accommodation sites such as AirBnB are having on local hotel units is also causing local anger.

In 2015, UNESCO added Venice and its lagoon to its list of world heritage sites in danger of damage as a result of the effects of tourism. The recent protests by those living locally simply highlights further the reality of the concern on the ground.

But in response to the growing number of protests, local authorities, as well as the many large cruise ship companies, dismiss the negative effects outlined and instead, emphasize how both the ships and tourism as a whole provide the local area with thousands of jobs, without which it would not survive.

It's the double-edged sword that many top tourist spots in the world are all being forced to address. Preserving local character, traditions and culture versus the big economy and the giant corporations who wish to continue profiting with little concern for the lives that are affected locally.