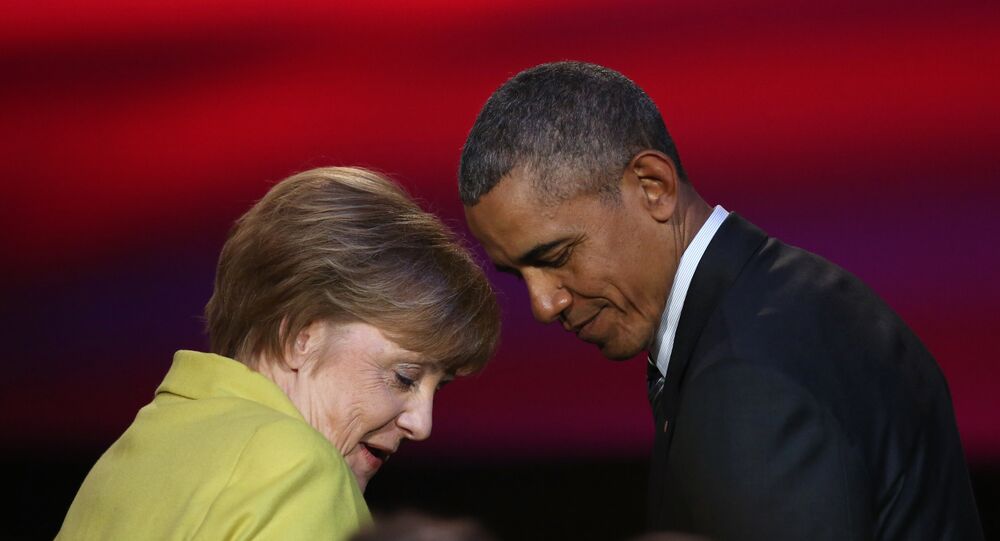 Despite growing opposition within Germany to the controversial Transatlantic Trade and Investment Partnership (TTIP) being negotiated between the EU and the US, German Chancellor Angela Merkel has said she will fight to keep the talks on track.

© REUTERS / Kai Pfaffenbach
Hanover Hassle: Obama Meets EU Leaders Amid Conflicts Over Syria, Turkey
Merkel met US President Barack Obama in Hanover, April 2016, when he pressed home the case for concluding the TTIP deal by the end of his presidency. Merkel is facing stiff opposition to the deal, with more than 25,000 people taking to the streets during Obama's visit in protest at the proposed deal.

Many in Germany have criticized the secretive nature of the talks that will create the biggest trade area in the world. But critics say the deal will water down EU regulatory control over what people eat, drink and use for medicines.

They say US companies will ride roughshod over EU regulations designed to protect its citizens.

​Moreover, the investor-state dispute settlement system (ISDS) — comprising separate tribunals — can be used by big business to sue governments who refuse to allow their goods to be sold, or put up barriers affecting their profits. There is major opposition to this aspect of TTIP in the European Parliament, which is likely to delay Obama's plans.

"I am sure that we wait for the end of the negotiations and then make an assessment," she told news agency Funke Mediengruppe.

This was in sharp contrast to her Vice-Chancellor Sigmar Gabriel, who recently said: "In my opinion, the negotiations with the United States have de facto failed, even though nobody is really admitting it."

It follows similar comments from Belgian PM Charles Michel, who told the newspaper L'Echo: "This treaty could represent growth and jobs for Europe on condition that it is balanced. What is on the table doesn't seem to be. So, for the moment, I prefer to say that it's not right and that perhaps we will resume negotiations later."

French Prime Minister Manuel Valls has called for a "clear break" to the negotiations.

"The agreement on the table is, under these conditions, unacceptable. We need a clear halt in order to resume from a new basis". He implied that the current negotiations were more favorable to the US than to the EU," Valls said.

The TTIP talks have been condemned by many campaign groups and MEPs for being conducted behind closed doors, with restricted access to the discussion documents. Moreover, billions have been spent to large corporation on lobbying to secure good terms in the negotiations.

1/10 of wilderness disappeared in 2 decades. #TTIP & #CETA will only make this worse. Enoughhttps://t.co/LtDiB8BCXn pic.twitter.com/7JT8MXxEAJ

​The major stumbling block is regulation. Trade in the EU is regulated by Brussels, whose food, environment, health and other standards are commonly agreed. However, they do not equate necessarily to US standards. Opponents say the US is putting pressure on the EU to water down its regulatory standards.