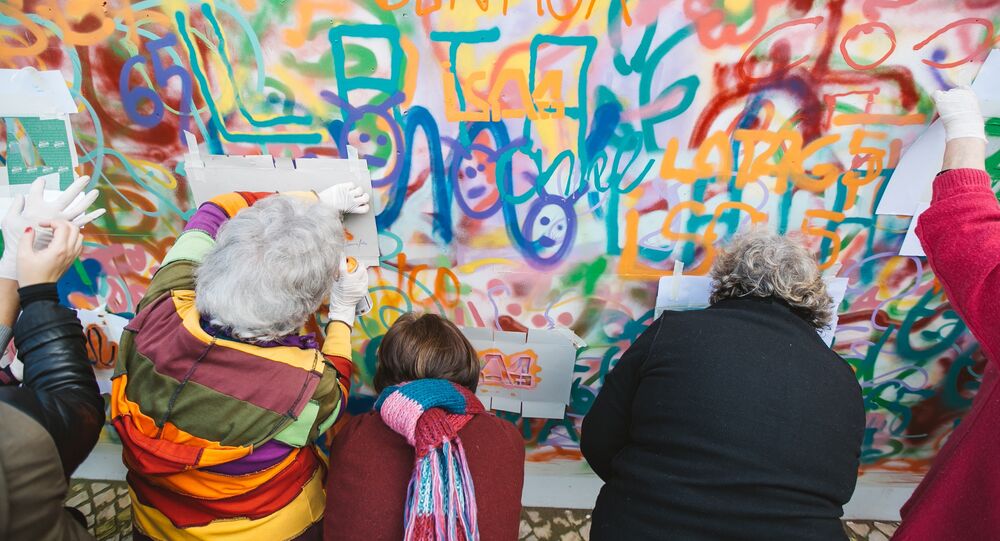 Graffiti is an art scene often associated with youth culture where people of a certain generation are more likely to talk about removing it rather than spray painting it on walls themselves.

Not so in Portugal's capital Lisbon, where LATA 65 street art collective is redefining who gets to hold the spray can by organizing workshops for the over 65s.

​"We wanted to introduce older people to a form of artistic expression often only associated to youth movements — basically we wanted to demonstrate that age is nothing but a numbers," said Rodrigues.

The idea to run a street art work shop for the over-65s was born over a cup of coffee.

"It evolved from an idea I had while I was sitting in a cafe drinking coffee with Fernando Mendes, from Cowork Lisbon at the LXFactory."

WOOL and LATA 65 on 5 questions for the artist! @woolfest #5questions https://t.co/dQtyGWZaZD pic.twitter.com/2Xg1BMncQD

"We discussed how the audience members at the Covilhã Urban Art Festival, who were the most interested in finding out about every detail of every painting, were the senior members," Rodrigues told Sputnik.

"Mendes, who has always followed the work of WOOL, challenged me to come up with a workshop, so I decided to do it straight away. Fifteen days later, we had established the first urban street art workshop for pensioners, LATA 65."

So proud of the amazing work of Lara Seixo Rodrigues at #Lata65. #UrbanArt #StreetArt #Graffiti https://t.co/nuvizT6Iry

Rodrigues explains that her idea was initially met with some skepticism and little appreciation.

"At the beginning, no one believed we could do it — or really understood why we wanted to," she said."But we wanted to demonstrate that urban street art had the power to democratize access to contemporary art."

"We also wanted to prove that concepts such as active aging actually work and that there can be solidarity between generations," Rodrigues told Sputnik.

The so-called "Graffiti Grannies" appear to have become pretty switched on to the world of street art.

"After the first workshop we quickly realized that it is possible to motivate and excite older generations through urban art — and that new activities often associated with youth culture can become a form of escapism."

"Like a break from the old routine, it adds a greater sense of well-being to their lives."

LATA 65 has worked with more than 230 pensioners over 65 all over Portugal and Sao Paulo in Brazil.

"Together, these "graffiti grannies" are redefining the way we expect older people to behave," said Rodrigues.