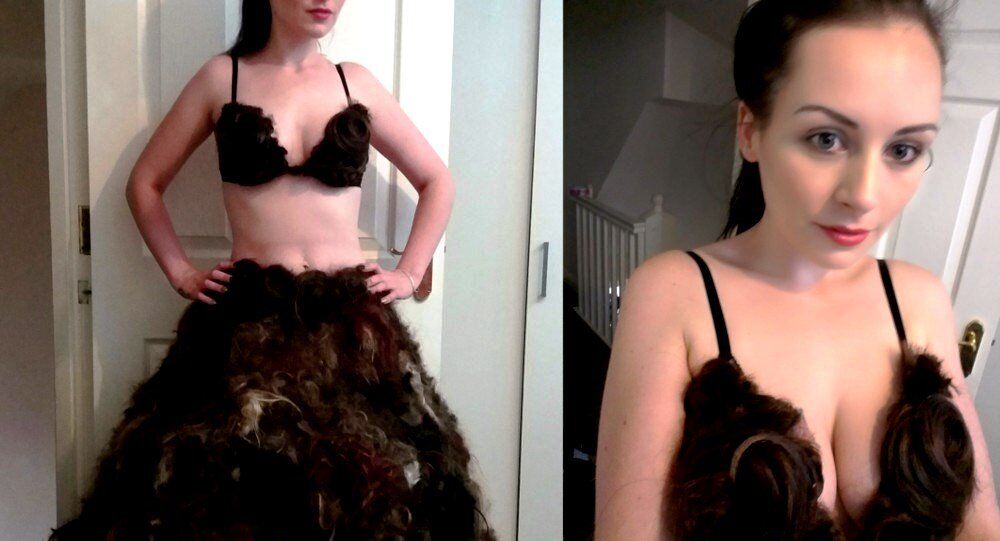 Dress Made From Pubic Hair for Sale in UK

"I just wanted to have the title for the most disgusting dress." Well, Sarah Louise Bryan from Wakefield in the north of England has probably achieved that with her latest design made out of pubic hair.

Yes, you did just read that. A dress made out of pubic hair.

"It's not like I was handling unsterilized pubes. They had all been sterilized and cleaned at high temperatures to kill off any bacteria," the 28-year-old mother of two told Sputnik.

Well that's a relief isn't it?

As for procuring the pubic hair, Bryan relied on her contacts at beauty salons, being a former beautician herself — she is now an actress.

"It's about making a statement in the fashion world and the more statements you make, the more people will notice what you do. I wanted to beat Lady Gaga's meat dress."

​Well, Bryan seems to have made her statement with "that" dress. As for grossing people out, Bryan is pretty pleased that people are horrified by her designs.

"I'm glad they're disgusted. They don't know what they're wearing. It could be made by a five-year-old child in a sweat shop in China — or from boiled eyes, cow skin or have whale sperm in the material," Bryan told Sputnik.

"Just because they can't see it, doesn't mean it's not there."

Bryan runs her own online boutique where she displays her designs, "not like this weird dress — but the wearable art," and told Sputnik she wants to be seen as a serious designer.

"I make wearable art. I've made a dress out of skittles, hundreds and thousands and one out of poppies for the British Legion. I want celebrities to come to me. Say, if they're lagging in the media and need something outrageous to get them noticed — that's what I can do.

"But what Miley Cyrus might class as outrageous — isn't the same as what I do," Bryan told Sputnik.

​"Big dresses help get you noticed, which is what I want to do. I want to get notices to get a job; it's all part of trying to get attention, so that I can sell my ideas to people."

Bryan is also hoping to make a dress using sperm.

"A lot of people responded on Twitter… people wanting to send me sperm — but my tweet got removed."

That's not that surprising is it?

And the media world better watch out, Bryan has her sights on making and wearing the most outrageous and perhaps disgusting dress at the MTV awards one day.

"I want to go to a really high profile event, like the MTV awards and wear the most outrageous dress." But Bryan won't reveal to Sputnik what it will be made from.

"All I can say is — my next dress is going to be really gross."

How lovely — and by the way, Bryan is looking for a buyer willing to spend US$13,000 on her pubic hair dress.

Save the Wedding! When Someone Says Yes to Your Dress