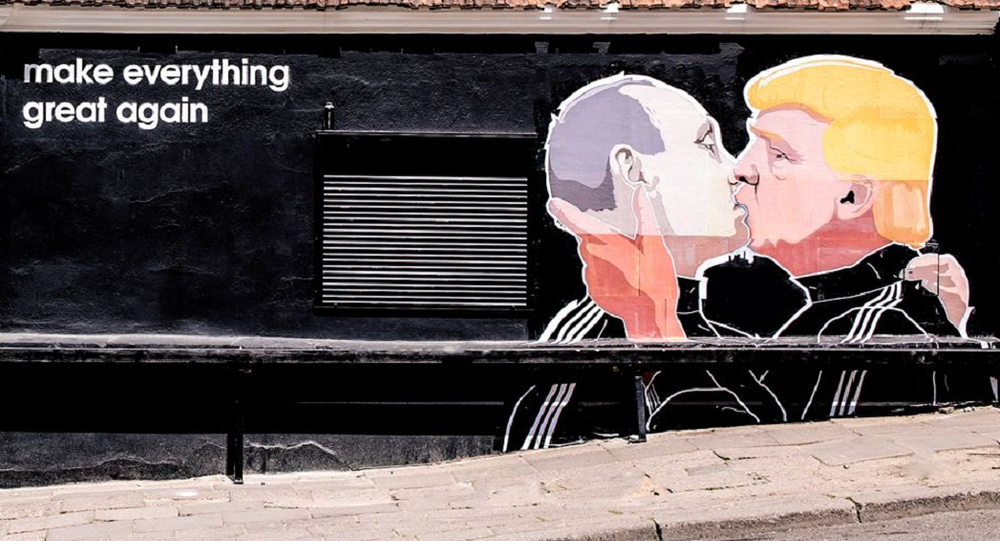 A mural on a café wall in Vilnius showing Russian President Vladimir Putin locking lips with US presidential hopeful Donald Trump is seen as a sign of Lithuanians’ fears about the real intentions of the billionaire tycoon who wants to enter the Oval Office in November, French newspaper Sud-Ouvest wrote.

"The passers-by smile but these are smiles with tears behind them,” the newspaper wrote about the mural, which is a riff on the famous 1979 photograph that showed Soviet leader Leonid Brezhnev and East German President Erich Honecker locked in a passionate embrace.

The “fraternal kiss” between the two Cold War-era communist leaders was immortalized in a famous piece of graffiti on the now-defunct Berlin Wall.

© REUTERS / Carlo Allegri
Trump Predicts 'Great Relationship' With Russia, Putin if Elected
The mural, painted by a local artist and unveiled on Thursday appeared to show concern over the US White House hopeful’s affinity to the Russian leader.

“It seems we have a new Cold War, and America may have a president who seeks friendship with Russia,” Dominykas Ceckauskas, who commissioned the giant mural on the outside wall of his burger restaurant, said.

“We see many similarities between [Putin and Trump]. They both have huge egos, and it’s amusing to see they are getting along well,” he added.

Lithuania and some eastern European nations are worried by the criticism of NATO by the presumptive Republican presidential nominee. This graffiti expresses the fear of some Lithuanians that Donald Trump is likely to kowtow to Vladimir Putin and be indifferent to Lithuania’s security concerns.