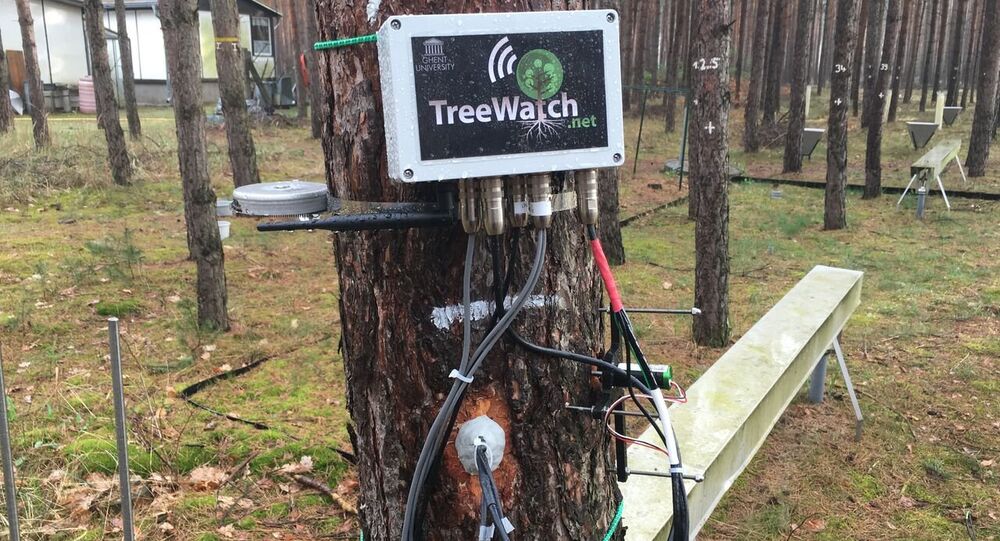 It looks like scientists have finally found the answer to the age-old question: "If a tree tweets in the forest and no one is there to hear it, does it make a sound?"

Researchers at the Federal Research Institute for Forest Ecosystems have wired the tree with equipment worth several thousand euros. The equipment transfers all important data regarding the health of the tree online and is designed to find out which conditions dry out pine trees.

The experiment is, among others, related to a concern about the negative consequences of climate change.

Dr. Kathy Steppe, head of the Plant Ecology research unit at Ghent University, Belgium, said in an interview that trees give out signals that are translated into messages by sensors attached to their trunks and branches.

When asked if trees can actually speak, Dr. Steppe said that this was just an interpretation of signals about how much water the tree has “drunk” during the day and how much is still left inside.

“Basically it means that the tree is active at that moment and it gives you an idea about how much water it is consuming,” she said.

When asked if a tree stops to tweet, does it mean that it is no longer alive, Dr. Steppe said: “Well, the tree sends out signals as it grows and when it starts to shrink during the day. The larger the shrinkage is the more stress the plant has, and if a certain threshold is passed we can see that. It’s like a heartbeat. If it is going up it gives you a warning. The same thing happens with trees where they shrink during a drought, when the air temperature is too high during a heat wave. That’s the way it works.”

Dr. Steppe and her team have created a network of “tweeting trees” in Belgium and Germany.

“The idea is to create a larger network across Europe. If you have tweeting trees from the north to the south then a heat wave comes from south to the north we know the heat wave is approaching. A network of ‘talking trees’ will warn us to take action. It’s a big advantage compared to the weather maps we have today. We are now building a system of trees going from northern European to southern Europe and people from nature reserves are also interested, so we are going to have man.”

“There is large demand for such sensors which we put on tees. We are now working to make these sensors cheaper so that more people are able to use them. These sensors are nice instruments that show people how nature works and about the impact of climate change on the environment,” Dr. Kathy Steppe said in conclusion.

Precision Strike: A Cyclist Hit by a Falling Tree

Woman Busted for DUI with Tree Stuck to Front of Car