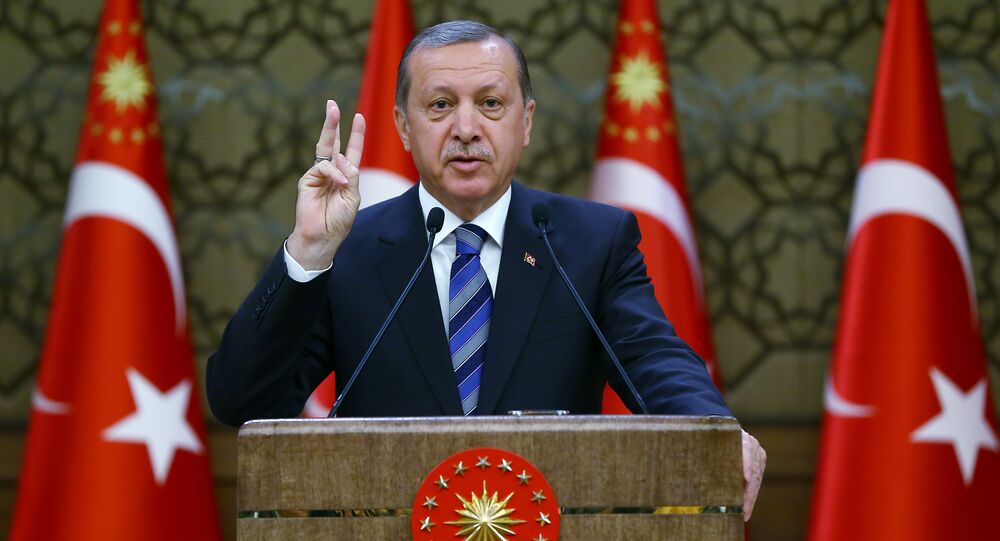 In a further sign of his anger at being mocked by artists abroad, Turkish President Recep Tayyip Erdogan has formally complained to the Swiss over a photograph in an exhibition which purports to blame him for the death of a Turkish teenager.

The photograph — on display at the Place des Nations in Geneva — is by Swiss-Turkish photographer Demir Sönmez, who is of Kurdish and Armenian origin. It shows a banner from March 2014, which proclaimed that Erdogan was responsible for the death of a teenager on the Taksim square in Istanbul in June 2013. The caption on the photo reads: "My name is Berkin Elvan. The police killed me on the orders of the Turkish prime minister."

The Turkish ambassador in Switzerland has lodged a formal complaint against the photo, calling for it to be removed from the exhibition. However, Geneva's local government said it stood by the exhibition — supported by campaign group Reporters Without Borders — which "participates towards freedom of expression and highlights Geneva's role as capital of human rights."

© AFP 2021 / GURCAN OZTURK
A protester stands in front of a barricade bearing a portrait of Berkin Elvan, the 15-year-old boy who died from injuries suffered during last year's anti-government protests, following clashes between police and demonstrators after the funeral of Elvan, in Istanbul on March 12, 2014.

The news come in the same week that Ebru Umar, a Dutch journalist of Turkish origin, was arrested while on holiday in Turkey on Saturday (April 23), after writing in her column that Erdogan's attacks on free speech was equivalent to Dutch World War 2 Nazi Party "NSB practices," calling yip Erdogan a "megalomaniac dictator."

The idiocy continues: can't access files on my laptop. Just another day in paradise.

The latest events are certain to put pressure on EU leaders of the deal struck with Turkey to return "irregular migrants" from Greece to Turkey on a one-for-one basis for Syrian refugees being sent from Turkey to the EU.

According to Amnesty International, the human rights situation in Turkey deteriorated markedly following parliamentary elections in June 2015 and the outbreak of violence between the Kurdistan Workers' Party (PKK) and the Turkish armed forces in July.

The right to freedom of peaceful assembly continued to be violated. Cases of excessive use of force by police and ill-treatment in detention increased. Impunity for human rights abuses persisted.

Guy Verhofstadt, the former Belgian prime minister and now leader of the Group of the Alliance of Liberals and Democrats for Europe in the European Parliament said:

"Drinking from Erdogan's poisoned chalice is not the solution."