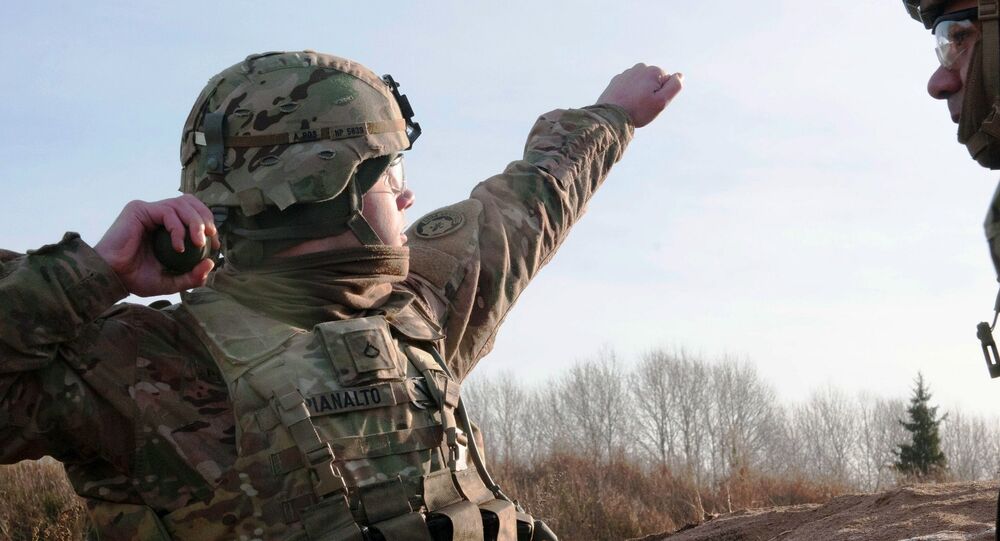 Rising tensions were a leading factor behind a global increase in military spending in 2015, with strained relations between the West and Russia leading to a significant jump in defense expenditure among central and Eastern European states, according to a report from a Swedish think tank.

The report, released by the Stockholm International Peace Research Institute (SIPRI), showed that global military spending increased by one percent in 2015, the first yearly increase since 2011.

The share of military expenditure (%) among the world's top 15 spenders in 2015.

While geopolitical tensions contributed to an overall increase in spending, other factors such as the drop in oil prices and the discovery of new resources also had an effect on military funding throughout 2015.

© AFP 2021 / JANEK SKARZYNSKI
The Price of Fear: EU Defense Budgets Boom Amid ‘Russian Threat’ Paranoia
The report showed a decrease in defense spending in Africa, South America and the Caribbean, which contrasted with increases in military expenditure in Asia and some parts of the Middle East.

While the consistent decline in western defense spending eased off in 2015, researchers highlighted the dramatic increase in military-related purchases in central and Eastern Europe.

When taken collectively, spending in western and central Europe was down by 0.2 percent, however central European spending alone was up 13 percent, with SIPRI researchers pointing to frayed tensions with Russia as the main factor behind the increase.

"There were particularly large increases in countries bordering Russia and Ukraine-namely Estonia, Latvia, Lithuania, Poland, Romania and Slovakia-which are those most concerned about Russia's intentions following the crisis in Ukraine," the report stated.

The figures back up the increasingly tense rhetoric between central and Eastern European nations and Russia, who have been at odds each other's approach to the crisis in Ukraine and other issues.

The West accused Russia of militarily interfering in the conflict in Ukraine and criticized Moscow over its actions in Crimea, saying it undermining Kiev's sovereignty.

© REUTERS / Francois Lenoir
NATO Ramps Up Military Forces Near Russia to Cold War Levels
Moscow has continually rejected claims that it was engaged in the military conflict between Kiev's forces and eastern Ukrainian rebel groups, instead accusing the West of contributing to the increase in tensions through the build-up of NATO resources in Eastern Europe.

The tensions with Russia were also having an impact on western European spending, according to SIPRI.

"The United Kingdom, France and Germany have all announced plans for modest spending increases in the coming years sparked by concerns about Russia and the threat posed by the Islamic State," the report said, highlighting the increased uncertainty of the world today.

"On the one hand, spending trends reflect the escalating conflict and tension in many parts of the world; on the other hand, they show a clear break from the oil-fueled surge in military spending of the past decade. This volatile economic and political situation creates an uncertain picture for the years to come."

The study found that the US was still by far the world's leading spender on military resources, followed by China, Saudi Arabia and Russia.

The Russians Are Coming! US Pressures Europe to Spend More on Military