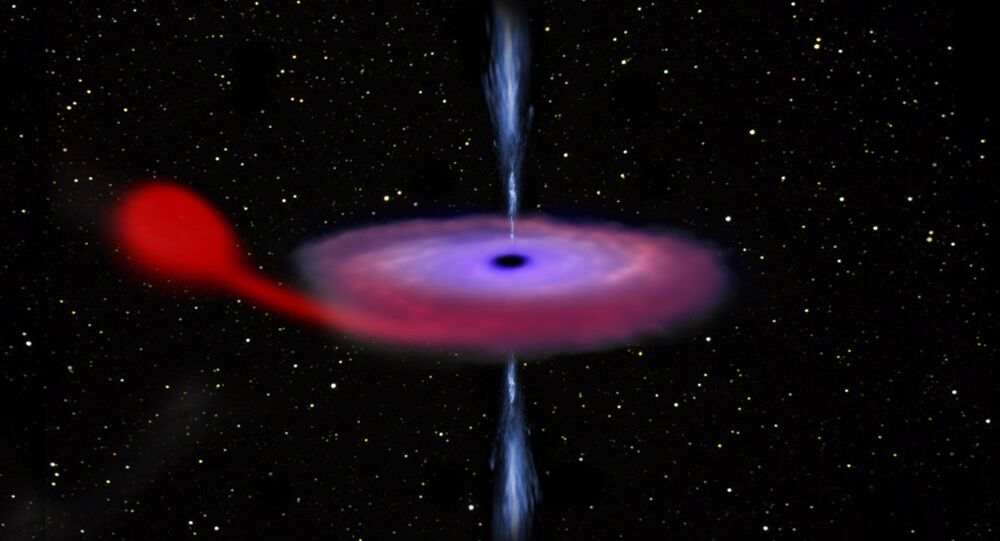 Excitement is growing on Earth after astronomers discovered a black hole being "force-fed" so much matter by an orbiting star that it had to spit out what it couldn't swallow, resulting in red flashing jets shooting into the galaxy.

In June 2015, a seemingly greedy black hole devoured so much star matter it had no choice but to spew out the surplus star at a rate of 1/40th of a second — in intense red flashes.

"This particular black hole was swallowing matter it had stripped off from a neighboring star. As it got hotter and brighter it spat out what it could not swallow," Dr Poshak Gandhi associate professor at Southampton University told Sputnik.

"It was almost as if it was being force-fed."

Led by the University, a global team of #astronomers have witnessed a black hole raging red: https://t.co/Ogs6YP0UFH pic.twitter.com/Mv2whPagfb

The new study, published in the journal Monthly Notices of the Royal Astronomical Society says the rate of the matter falling into the black hole was so rapid it could notswallow it all, therefore it spat out the surplus debris "like dazzling red jets shooting into the galaxy," according to Dr Gandhi.

The V404 Cygni black hole was the first black hole identified in the galaxy, 7,800 light years from earth. The exact origin of the jets remains unknown, however scientists can conclude that the light it being emitted from the base of the black hole jet.

"Black holes grow by swallowing matter from their surroundings. When this black hole was spitting out matter, it was so bright that anyone with a 20 centimeter telescope could observe it — and many people did, contributing to important data that has been published around the world," Dr Gandhi told Sputnik.

"That is really exciting as it proves that there is a way to connect astronomy to the wider public and that people can contribute to serious research in astronomy."

"For the jets to be so rapidly at 1/40th of a second means it must be coming from very close to the black hole and up until now it has been difficult to know what materials are ejected in this region.

"This is enormously exciting and holds up a window into what happens close to a black hole."