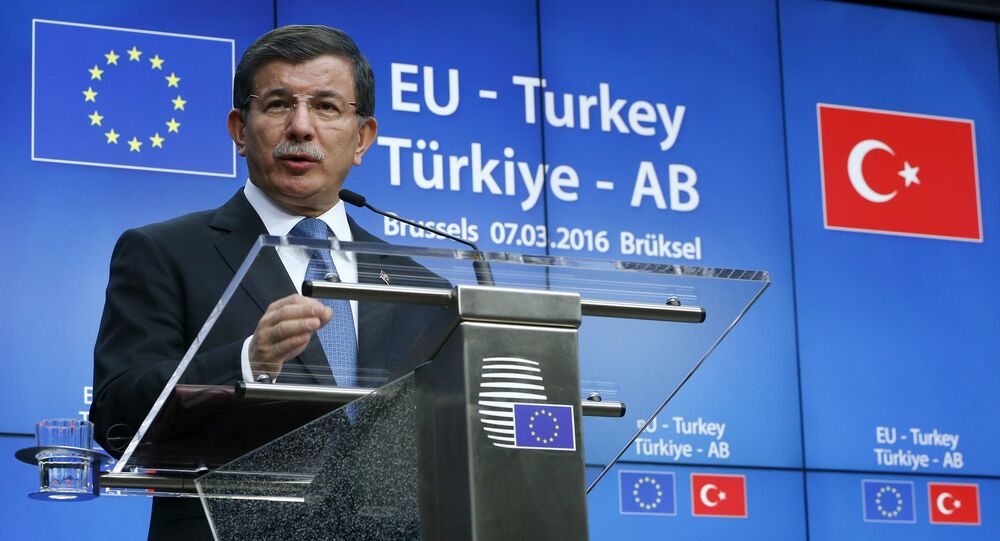 Erdogan’s Turkey this week diversified its rogue-state conduct from terror sponsorship to international bribery. The proceeds? Not bad earning, with $6.6 billion in “aid” extracted from the European Union.

© Fotobank.ru/Getty Images / Sean Gallup
EU, Turkey Agree on Plan With Ankara Taking Back All Illegal Migrants
It’s supposed to be part of a groundbreaking deal to end the refugee crisis in Europe. But while EU politicians and bureaucrats throw billions of dollars to their Turkish “partner”, the simple question remains unanswered: who created this crisis in the first place?

It’s also bitterly hilarious that while EU governments order their citizens to endure economic austerity and cuts to workers’ rights, the same authorities can suddenly find, with ease, endless cash to pander Turkey’s authoritarian regime with.

Four months ago, the Ankara regime of President Recep Tayyip Erdogan squeezed the EU for a promise of $3.3 billion in financial aid, allegedly to slow down the flow of refugees from Turkey to Europe. Over that period, the influx of refugees has only become much worse, with numbers for the first three months of this year set to overwhelm last year’s record high of one million migrants reaching European shores.

Yet in spite of Ankara’s abysmal failure to curb the human trafficking from its territory, Erdogan’s regime is now to get double the money paid out by Brussels – courtesy of hard-pressed EU taxpayers. The $6.6 billion that Ankara is to receive over the next two years is purportedly for helping to accommodate refugees on the Anatolian mainland.

As part of the “deal” hatched this week in Brussels between EU leaders and Ankara, all “irregular migrants” currently languishing in Greece – some 30,000 – are to be forcibly returned to Turkey.

© AFP 2021 / ARIS MESSINIS
Merkel's Plan in Acute Danger: Turkey Rejects NATO Ships in Aegean Sea
NATO warships have been called in to facilitate the “processing”. Britain this week announced that it is sending a large amphibious landing ship for the unspoken but obvious purpose of relocating people en masse.

Ostensibly, the EU is committed to eventually take back an equal number of Syrian refugees for asylum. But don’t count on that. Out of 160,000 refugees that the EU vowed to domicile last year, so far only 700 individuals have been distributed among the 28-nation bloc. Don’t be surprised if the camps in Turkey become permanent features like refugee centers in Lebanon and Jordan.

What we have here is a sordid bargain. The EU establishment gets to “ship back” migrants to Turkey, and to stop the flow of refugees. That influx was straining the very fabric of the EU, not because of the absolute numbers of migrants involved, but because of the bickering between the various member states.

So to the immense relief of the Eurocrats, the problem is solved, at least on the short term. Violating its own lofty “principles”, the EU is to dump the migrants into camps in Turkey. And the Ankara authorities not only stand to collect $6.6 billion from the EU, this week Erdogan’s sidekick prime minister Ahmet Davutoglu also extracted other concessions: visa-free travel for 75 million Turks to Europe to take effect within four months, and a promise from Brussels to speed up Turkey’s accession to the EU.

The strong-arming of the EU by Erdogan was no doubt emboldened by Brussels’ weak-kneed response to his brutal crackdown last weekend on independent news media. The violent seizure by riot police of Turkey’s biggest opposition newspaper, Zaman, was met with cowardly silence from the EU.

© REUTERS / Yves Herman
Turkey's Goal of Joining EU 'Poses an Existential Problem for the West'
Pusillanimous platitudes of “concern” for “free speech” and European “core values” issued by the likes of French President Francois Hollande and the EU’s foreign affairs chief Federica Morgherini would have only caused Erdogan and Davutoglu to snigger with derision at the “protestations”.

Erdogan knows that the EU is a paper tiger. European governments and its parliament have known for months about his creeping despotism, and they have done noting about it. Journalists have been locked up, media outlets forced to close, and Brussels just mouths a few trite cautions.

Erdogan’s regime has stepped up bloody repression of ethnic Kurds in the country’s southeast, and again Brussels hardly squeaks.

The Turkish military has been bombarding northern Syria for weeks, in what is plainly an act of aggression towards a sovereign state, and Brussels says nothing. Erdogan’s rogue regime is documented to be supplying weapons across Syria’s border to illegally armed groups trying to topple the government in Damascus, and again Brussels goes mute.

So Ankara knows full well that the EU establishment has no principles despite its lofty proclamations on human rights and avowed respect for international law. He knows that his roguery will be given a blind eye because when it comes to Syria the EU itself has been one giant rogue entity. Its governments, Britain and France in particular, have been part of the covert war on Syria for regime change, along with Washington of course.

The EU maintains economic sanctions on Syria while complaining about the humanitarian conditions in the country. How’s that for criminal double-think?

© AFP 2021 / YASIN AKGUL
Saudi-Turkish Trick: What Are the Two Scheming in Syria?
From the outset of the war in March 2011, Turkey and Saudi Arabia financed the sectarian mobilization of Syrian communities who were readily recruited to the project of regime change against President Assad. An important element in this mobilization was the creation of refugee camps in Turkey, from where “jihadists” could be trained, weaponized and filed back into Syria. Turkey provided the terrain and logistics, while Saudi Arabia furnished the money, and the US and other NATO powers orchestrated the whole project.

By way of substantiating the nefarious role of Turkey, a senior source in the UN’s refugee agency (UNHCR) told this author that Ankara has always insisted on controlling the refugee camps in its territory. Normally in an international refugee crisis, the UNHCR is the lead body for registering and administrating relief facilities. Why Turkey has refused this international input is no doubt because Ankara has been using refugee camps for its own political and covert military ends.

Ironically, Turkey and other NATO powers have accused Russia of “weaponizing the refugee problem” with the alleged intention of undermining the EU. It is a contemptible, baseless contention.

Nonetheless, the concept and practice of weaponizing refugees finds reality when the role of Turkey in the war on Syria is examined.

© REUTERS / Yves Herman
Turkey's Erdogan Is 'Complicit' in Europe's Migrant Crisis
Erdogan’s regime has not only played a prominent part in fomenting the displacement of nearly 12 million Syrians for the state-sponsored terror war on Syria, Ankara has also evidently orchestrated the refugee crisis for extortion of the EU.

But the EU mis-leaders are so compromised in the whole sordid affair they cannot deal effectively with the problem. Because that would mean admitting that the war on Syria has been a criminal enterprise from the get-go, which they have willingly colluded in.

What the EU plutocrats then do is this: shunt the refugees off to camps outsourced to Turkey regardless of international law; pay off Erdogan and his autocratic cronies with $6.6 billion and other concessions; and, in the best bumbling Eurocrat-style, hope that the problem will just go away.

The EU establishment will find, however, that the crimes of Erdogan, as with their own, cannot be buried in this way. Brussels may think it has found a quick-fix for now. But the corruption that it is entertaining with Ankara is a fatal, terminal disease.