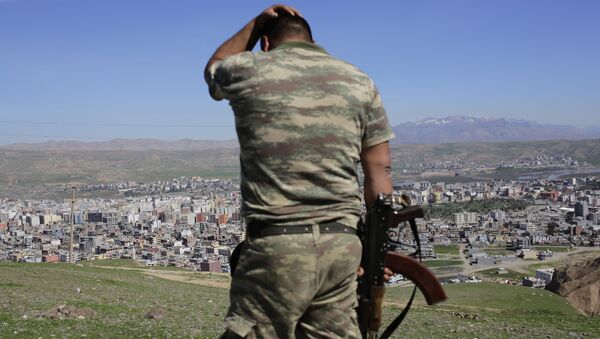 © AFP 2021 / YASIN AKGUL
Subscribe
Even though both Turkey and Saudi Arabia could find themselves in a “highly combustible situation” in Syria if they decide to send in their ground troops, the two nevertheless “seem more than willing to get directly engaged.” It is definitely not about Daesh, says foreign policy expert Salman Rafi Sheikh, so what is the real reason?

US-backed Proxies Use Ceasefire in Syria to 'Regroup, Rearm and Prepare'
“The officially and un-officially sponsored popular contention that Saudi Arabia and Turkey are aiming at sending ground troops to Syria out of the fear of Islamic State (Daesh) hitting them is merely an illusion that has no practical substance,” Salman Rafi Sheikh, research-analyst of International Relations and Pakistan’s foreign and domestic affairs writes in his article for the New Eastern Outlook website.

“The illusion of an anti-IS (Daesh) Saudi-Turk military intervention in Syria is, therefore, only a trick that they are using for deceiving the world generally and their public specifically into believing the ‘righteousness’ of the cause they are fighting for,” he furthermore states.

It is an “open secret” that both Turkey and Saudi Arabia always opposed Assad’s rule in Syria. Therefore, the author writes, if direct military intervention ever takes place, it will certainly be directed against Assad’s forces rather than IS (Daesh) or any other Gulf-supported terrorist outfit.

Lone Superpower? Washington's Allies are Getting Out of Control
However, he adds, there is another reason for their engagement in the fight.

“Saudi Arabia and Turkey seem to be preparing the plan to deliberately escalate the conflict in Syria as a means to put Iran into an uneasy geo-strategic position and thereby force it to re-direct its resources to fighting the war it cannot virtually afford to go astray; for, the survival of Syria as an ally of Iran in the Middle East is crucial for Iran’s standing as a regional power,” the expert explains.

The loss of Syria would weaken Iran’s position in Lebanon, he adds, and thereby further “compromise its position vis-à-vis Israel as well as its “Sunni” rivals.

The collapse of the Geneva talks has only provided the House of Saud and the ‘House of Erdogan’ with a supposedly ‘legitimate’ excuse to send troops to Syria to face off against Iran — a country they have been unable to defeat at the diplomatic level for a number of years already, Salman Rafi Sheikh explains.

Deal With It, Erdogan: Assad is Not Going to Fall Anytime Soon
“That said, it is not unthinkable that Saudi Arabia’s immediate decision to break off relations with Iran and prod their Arab and African allies into taking similar action was driven by their apprehension towards the economic and political re-emergence of Iran following the enforcement of the nuke-deal.”

While Turkey may not feel so ‘alarmed’ at Iran’s re-emergence after years of isolation, it certainly is at odds with Tehran due to the latter’s full support for Assad and its own inability to carve Syria into different “zones” to shield itself against the prospects of a stronger and united Kurdish nation and its demand for an independent and sovereign Kurdistan.

However, the expert warns that any direct intervention into the country without the authorization of Syria’s incumbent government will be a “recipe for disaster” as it will greatly transform the Syrian ‘civil war’ into a much wider regional conflagration.

000000
Popular comments
he forgot to mention other motives. well..this is easy to comprehend, But IF we believe Mr Kennedy, It was when Syria refused to allow the Qatar pipe to go thru. Me I doubt that, since, cash transit etc would had achieve same results. I strongly believe was about the Geopolitical games of west. The 4. U.S, U.K, France , Germany. They wanted to control Syria. Like they did to Iraq. And the LEVIATHAN GAS FIELDS. According to the maps, it covers deep inland from the coast of Syria. And well into the ocean on front. Iran? Everyone knows Iran is in the list that a U.S Gen, Clark mentioned that he saw. Long ago. However, he forgot to mention Russia. That could get into a regional war. Russia alone, can end Turkey, Saudi and all unions there by itself, without nukes. To that effect, Russia MUST speed up and prepare for what seems inevitable. ARM them FAST. Iran should get it's S 300 FASTER. SU 30, MIG 29 modernized. T 90 tanks. And way more. Russia may get a base in Iran IF possible. When the rumble begin, and NATO see that Syria well armed, Iran could contain both Saudi and Turkey, and that Russia is patrolling, everyone will find excuses to go away. Iran can fight. And the old F14's could be renewed. Or Russia could buy them for training in Russia. Why not? Russia can also bring S 400 run by Russia into Iran. This will turn both Syria and Iran into Juggernauts. And could prevent a major regional war. where probably Russia will have to intervene directly IF not well prepared. Israel should be very careful. NOT to get on the wrong foot with Russia.
cast235
5 March 2016, 16:37 GMT1
000000
It is said the idle minds are the devil's tools, and that should explain the secret intrigues of the "House of Saud." When it comes to Turkey, it can be best described as 'addled minds are the devil's tools.' They are, both, what happens when you let children play with matches.
marcanhalt
5 March 2016, 17:02 GMT1
000000
Newsfeed
0
New firstOld first
loader
LIVE
Заголовок открываемого материала
Access to the chat has been blocked for violating the rules . You will be able to participate again through:∞. If you do not agree with the blocking, please use the feedback form
The discussion is closed. You can participate in the discussion within 24 hours after the publication of the article.
To participate in the discussion
log in or register
loader
Chats
Заголовок открываемого материала
Worldwide
InternationalEnglishEnglishMundoEspañolSpanish
Europe
DeutschlandDeutschGermanFranceFrançaisFrenchΕλλάδαΕλληνικάGreekItaliaItalianoItalianČeská republikaČeštinaCzechPolskaPolskiPolishСрбиjаСрпскиSerbianLatvijaLatviešuLatvianLietuvaLietuviųLithuanianMoldovaMoldoveneascăMoldavianБеларусьБеларускiBelarusian
Transcaucasia
ԱրմենիաՀայերենArmenianАҧсныАҧсышәалаAbkhazХуссар ИрыстонИронауОssetianსაქართველოქართულიGeorgianAzərbaycanАzərbaycancaAzerbaijani
Middle East
Sputnik عربيArabicArabicTürkiyeTürkçeTurkishSputnik ایرانPersianPersianSputnik افغانستانDariDari
Central Asia
ҚазақстанҚазақ тіліKazakhКыргызстанКыргызчаKyrgyzOʻzbekistonЎзбекчаUzbekТоҷикистонТоҷикӣTajik
East & Southeast Asia
Việt NamTiếng ViệtVietnamese日本日本語Japanese俄罗斯卫星通讯社中文（简体）Chinese (simplified)俄罗斯卫星通讯社中文（繁体）Chinese (traditional)
South America
BrasilPortuguêsPortuguese
NewsfeedBreaking
23:18 GMTUS Judge Denies Giuliani’s Request to Return, Destroy Seized Evidence, Reports Say
23:16 GMTFrench Court Finds Man Guilty of Cartoons Portraying Macron as Hitler Over COVID-19 Policies
23:04 GMTAustralia's Great Emu War: How a Nation Declared War on a Bird and Lost
23:00 GMTBlinken Vows to ‘Keep Normalization Marching Forward’ on One-Year Anniversary of Abraham Accords
22:39 GMTEx-Algerian President Abdelaziz Bouteflika Reportedly Dies Aged 84
21:51 GMTAct of Sabotage Results in Power Outage in Damascus, Energy Minister Says
21:35 GMTOld Friends Are Not the Best?
21:08 GMTMilley Assured Pelosi That US Military, Not Trump, Controlled the Nukes, Vice Chairman Says
21:05 GMTFed. Chief Powell Orders Sweeping Ethics Review Amid Trading Scandal at Federal Reserve
20:38 GMTBiden to Convene COVID-19 Summit on Margins of UN General Assembly
20:30 GMTFootball Legend Pele 'Rushed Back' Into Intensive Care Days After Colon Cancer Surgery
20:21 GMTRussia Possesses ‘Unbelievable Military Power’ After Transforming Forces, US General Says
20:20 GMT‘Irony of Historical Proportions’: Iran Ex-FM Zarif Muses on US Deal to Sell Australia Nuclear Subs
19:47 GMTPrince Andrew Has a Week to Challenge Court Ruling to Serve Papers Amid Procedure Disagreements
19:43 GMTFDA Panel Votes Against Offering Pfizer Booster Shots for COVID-19 to Most Americans
19:37 GMTFrance Recalls Ambassadors From US, Australia for Consultations over AUKUS Alliance
19:34 GMTUS Prosecutors Reportedly Plan to Charge Ex-Boeing Employee for Concealing Truth About 737 MAX
19:28 GMTAlt-Right Proud Boys Warn Members to Avoid 'Trap' of Washington DC Rally
19:18 GMTTrump Sends Letter to Top Georgia Officials Demanding to End 'Illegitimate' Biden's Presidency
19:18 GMTTaliban Reportedly Ditches Women's Ministry in Favour of 'Ministry of Virtue and Vice'