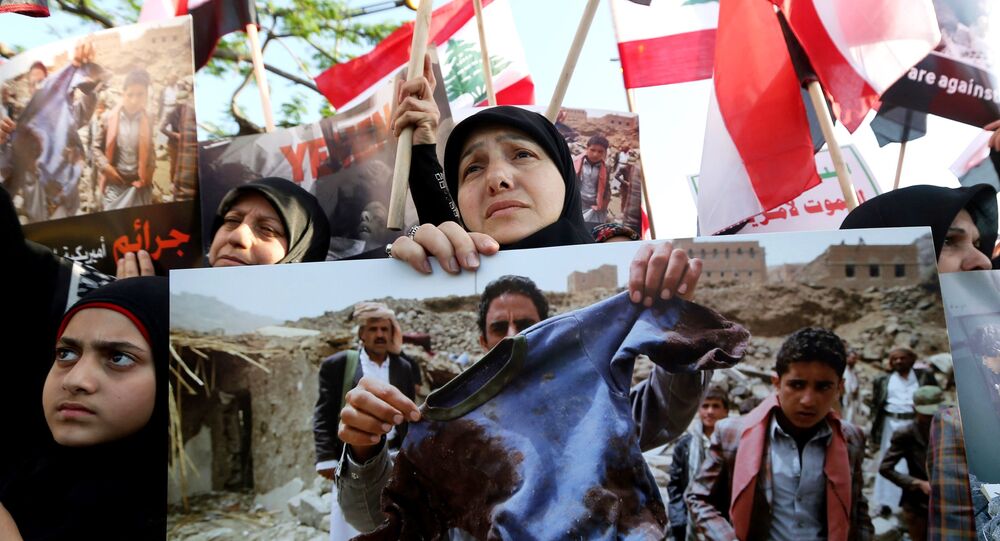 The UK has been accused of cashing in on the Saudi-led coalition's military offensive in Yemen and ignoring allegations of war crimes, after new figures revealed a sharp increase in British arms sales to Saudi Arabia since last year's intervention.

© AFP 2021 / Oli Scarff
Britain Headed for 'Very Embarrassing' Court Case Over Saudi Arms Sales
Statistics published by the UK government show how British arms sales jumped rapidly in the second and third quarter of 2015, coinciding with Riyadh's March 26 announcement that it would be undertaking a military offensive against Houthi rebel fighters in Yemen.

The UK's continued and increased sale of arms to Saudi Arabia also comes amid countless allegations that Saudi forces have been responsible for breaching international law and committing war crimes through the bombing and targeting of civilian areas in Yemen.

In December, UN human rights chief Zeid Raad al-Hussein said that a "disproportionate" number of civilian attacks had come from Saudi offensives, with attacks on residential areas, schools and other civilian buildings such as hospitals.

“People still consider hospitals a target & try to avoid them as much as possible” https://t.co/Yi4vsiaDwz #Yemen pic.twitter.com/GdEXQVehNj

The UN, who has labeled the situation in Yemen a "humanitarian catastrophe" also accused the Saudi-led coalition of being responsible for two-thirds of the estimated 2,700 civilian casualties since March, leading to a growing campaign calling on Britain and other countries such as the US to halt arms sales to the Gulf kingdom.

"These figures are deeply worrying, showing that the UK continued to dispatch huge amounts of weaponry to Saudi Arabia despite overwhelming evidence that the Saudi war machine was laying waste to Yemeni homes, schools and hospitals," Allan Hogarth, head of policy and government affairs at Amnesty International UK.

"As officials were signing off these sales, hundreds — possibly thousands — of Yemeni civilians were dying in a terrifying barrage of indiscriminate Saudi airstrikes in the country."

The criticism has also resulted in the UK being threatened with a High Court challenge if it doesn't halt arms sales and suspend licenses to Saudi Arabia by January 25.

Citing Article Two of the EU Council Common Position on arms sales, lawyers representing the UK-based Campaign Against Arms Trade (CAAT) have accused Britain of acting illegally through its continued sale of arms to Saudi Arabia.

​"For a long time now there have been serious allegations from very reputable sources that the Saudi airforce and the Saudi military have been violating international humanitarian law in Yemen," CAAT spokesperson Andrew Smith told Sputnik.

© Flickr / Campaign Against Arms Trade
Legal Action Looms Large as UK Accused of Illegal Arms Exports to Saudis
"UK arms have been central to this campaign in Yemen. We've seen UK fighter jets and UK bombs playing a leading role. We've seen political support for the action coming from the UK government. We want to stop arms sales to Saudi Arabia, we want to have licenses suspended for arms which… are being used to violate international humanitarian law."

Prime Minister David Cameron has rejected claims the UK is in breach of any law and defended his government's continued sale of arms to Saudi Arabia, saying — in regards to arms sales — the country has "some of the most stringent controls anywhere in the world."

Could There Be British Forces Assisting the Saudi-Led Coalition in Yemen?