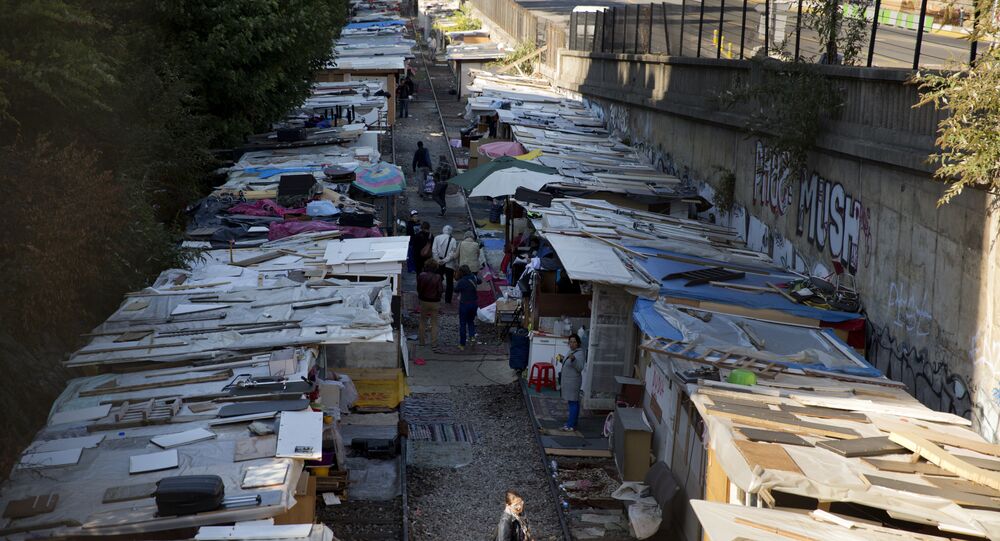 A migrant camp in Paris’ 18th Arrondissement has become a large slum, mostly populated by the Roma people. Sputnik spoke with several Paris residents living nearby the camp who shared their thoughts about the slum dwellers.

© AFP 2020 / PHILIPPE DESMAZES
Some 100 Gypsies Burn Cars, Block Railways in Eastern France
The camp itself is made out of the sea of camping tents and huts built from various construction materials. The situation in the camp is so dire and unsanitary that water and electricity are out of question. Sidewalks are littered with trash, the smell of fire is everywhere and stray dogs roam the streets. When one thinks about Paris, these aren't things that first come to mind.

Some Paris residents, such as Paul, who works in a bakery near the campsite, have no problems with the Roma. They help the migrants with food and wish Paris authorities did more to tackle the problem.

"They ask me for baguettes, bread; it annoys our customers, they don't want to see it in Paris. I feel sorry for Gypsies, so we give them bread… I have nothing against them, but it's been happening for two or three years now… They all could have lived in apartments," Paul told Sputnik.

Other are worried about the increasing level of theft and violence as a result of the Roma camp being in the area.

"I have no problems with the Roma, but sometimes they come into a store and you have to stand behind them, so they don't steal anything from you," a man, who introduced himself as Jean, said.

© AFP 2020 / DENIS CHARLET
Calais Lacks Gov't Support, Finances to Cope With Migration Crisis
Residents are also worried about unsanitary conditions, health problems and criticize the unwillingness of the French government to solve the issues. Things are getting out of control and authorities have to get something done as soon as possible, as the number of people in the camp is constantly growing and the slum itself continues to expand.

"This camp appeared this summer and it's growing every day… People, who work in the area, can only feel the smell of burning plastic… The winter is coming and the situation is getting worse. More than a thousand people, half of whom are children, live in sheds that are constantly increasing in numbers," Mark, a Paris resident who lives nearby, shared his thoughts with Sputnik.

According to people living near the camp, the situation isn't being handled properly. City authorities take no responsibility and fail to take care of the slum, as well as people living in tents. Looks like the problem isn't going to vanish anywhere anytime soon and there isn't light at the end of the tunnel.

France Not to Change Welcoming Migrant Policy After Paris Attacks