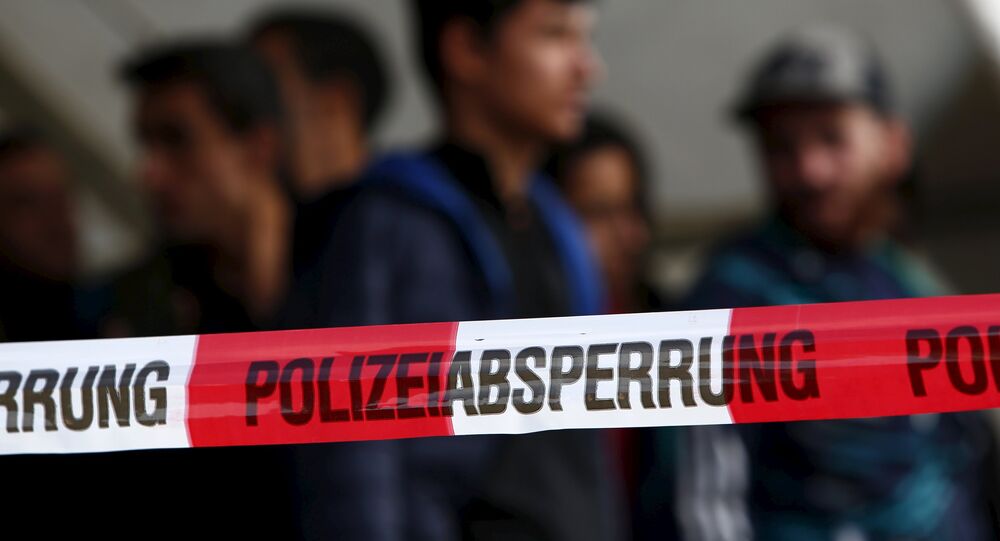 Authorities in Germany are deliberately keeping quiet about crimes occurring in refugee shelters, especially those involving brutality against women, as the country's policy of taking in asylum-seekers and providing them with sustenance and a monthly stipend has enraged many, who see the massive influx of young, mostly male Muslims as a threat.

© AP Photo / Jens Meyer
Merkel Under Pressure Over Refugees as Opposition Spills on to Streets
Germany is failing to control rampant crime among its new refugee population, but authorities are afraid to disclose the matter to the press. The influx has already enraged many ordinary Germans, who made their opinions known in Dusseldorf and other cities for the first time last year during anti-Islamisation protests. The country is expected to take in 1.5 million refugees in 2015, according to the Telegraph, which cited leaked government figures on Monday. For comparison's sake, Germany's largest city, Berlin, had a population of fewer than 3.5 million in 2010, when its third largest city, Munich, had a population of about 1.35 million.
© AP Photo / Marko Drobnjakovic
Public Opinion Hardening Towards Accommodating War Refugees

There are no comprehensive statistics available reflecting the situation on criminal violations in refugee camps in the country, which is connected to federal structure of Germany, where each federal state's police force reports to its own interior ministry, Reuters explains. To confound matters further, the federal states are responsible for managing accommodation for asylum seekers.

Police union chief Rainer Wendt believes that state authorities have played down the problem of women being assaulted in refugee camps and shelters, Reuters reported on Tuesday.

Baran + Sipal from Hassakah, #Syria keep warm in a makeshift camp on the Austrian / #Germany border at Freilassing pic.twitter.com/qKwLfAr68x

“It is understandable that there is the desire to calm things down politically,” Wendt commented to Reuters, referring to the attempts of officials across the country to dispel 'rumors' regarding the dangers associated with taking in tens of thousands of migrants. “There is a lot of glossing over going on. But this doesn't represent reality,” he added.

© AP Photo / Markus Schreiber
EU Prepares to Deport up to 400,000 Migrants in Leaked Plan
Germany's Gewerkschaft der Polizei (Trade Union of the Police) along with women’s groups, however, have insisted that ignoring the problem would be counterproductive. Now, women rights activists have reportedly raised their voices and call for the creation of safe zones for migrant women, which would require gender segregation in residential areas.
© AP Photo / Markus Schreiber
A migrant woman with a child stands in a queue of refugees and migrants after she arrived with a train at the train station Schoenefeld near, Berlin, Germany, Wednesday, Oct. 7, 2015.
© REUTERS / Axel Schmidt
Migrants From 'Safe' Countries Must Leave Germany if Migration Law Amended
Adult men account for almost three fourths of all asylum seekers in Germany; women and children account for the remaining fourth. Women, who comprise the minority, often become victims of an increasing number of crimes, especially sexual assault, rape and, reportedly, forced prostitution, as a recent open letter signed by several charities suggests, according to Reuters.

In Hamburg, eight cases of sexual assault in refugee camps have been confirmed this year; there the, Green Party's spokesperson for refugee affairs Tuelin Akkoc sees that right-wing political groups may use such reports to play the xenophobia card and try to turn public opinion against refugees.

“That's no reason to sweep this issue under the carpet. Right now is the time for the authorities to raise their voices in order to prevent extremist groups from dominating the debate,” Akkoc told Reuters.

For now, the general line for German officials is to wage war against far-right groups by giving speeches in public. The aim is to disperse rumors circulating all over the country and around the social media regarding how dangerous migrants from Middle East are.

“The federal authorities are investigating these resolutely and often the rumors are not true,” Interior Minister Thomas de Maiziere said. “There are things worthy of criticism. But there is no reason for a general suspicion of refugees,” he concluded.

More Migrants 'Could Create New Hotbeds of Tension' in Europe